The word “karst” literally means “rocky mountain” comes from a region in former Yugoslavia that includes Croatia and Slovenia.

The word “karst” literally means “rocky mountain” comes from a region in former Yugoslavia that includes Croatia and Slovenia. The word is derived from the Slavic word Kras.

What does Groundwater do?

Any limestone, dolomite or gypsum region showing typical landforms produced by the action of groundwater through the process of solution and deposition is called as Karst Topography (Karst region in the Balkans).

Erosional Landforms due to Groundwater

Following are the erosional landforms formed due to the action of groundwater.

A sinkhole is an opening more or less circular at the top and funnel-shaped towards the bottom. When as sinkhole is formed solely through the process of solution, it is called as a solution sink. 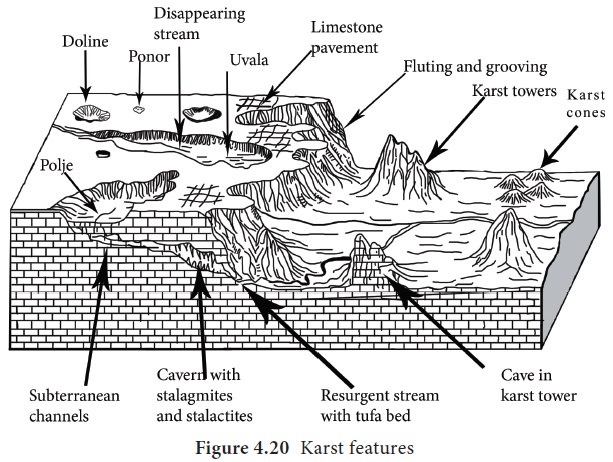 A doline is a closed depression draining underground in karst areas. It can be cylindrical, conical, bowl or dish shaped. The diameter ranges from a few meter to many hundreds of meters. The name doline comes from dolina, the Slovenian word meaning valley.

Lappies are the irregular grooves and ridges formed when most of the surfaces of limestone are removed by solution process. 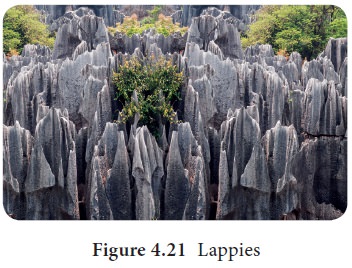 Series of smaller sinkholes coalesce into a compound sinkhole is called uvala.

Polje is an elongated basin having a flat floor and steep walls. It is formed by the coalescence of several sinkholes. The basins often cover 250 square km and may expose “disappearing streams.” Most of these basins have steep enclosing walls that range from 50 to 100 meter in height, giving rise to the name “blind valley.”

Caves normally have an opening through which cave streams are discharged. Caves having an opening at both the ends are called tunnels. 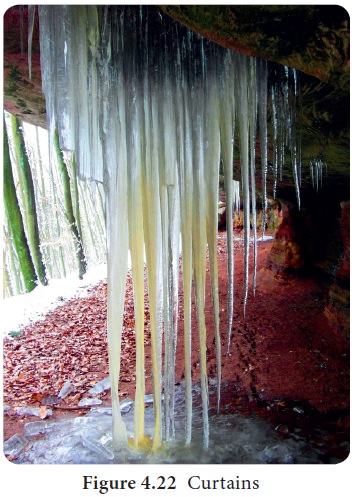 Depositional Landforms due to Ground water

The following depositional features are formed within caves. 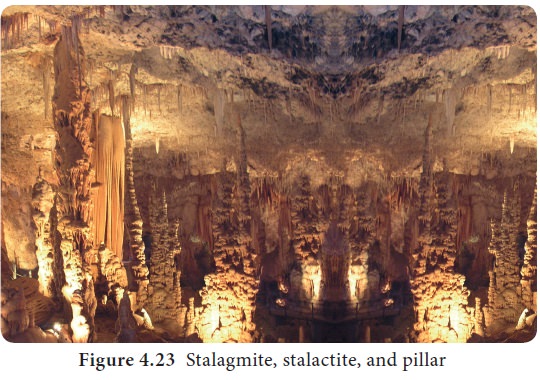 Rain water drips from long crack in a cave roof forms a continuous strip of calcites. It is called as curtains.

Drops of water containing dissolved limestone seep down through cracks in the cave roof. Drops of water lose carbon dioxide and deposit calcite. Overtime deposition of calcite forms pillars hanging down from the roof of the cave. It is called as stalactite and where the stalactite stretches towards the sides are known as Helactites.

Deposition of calcite forming icicles growing upward from the cave floor is called as stalagmite.

When both the stalagmite and stalactite join together, it is known as pillar.