Alluvial fans are often found at the foot of arid or semiarid mountain ranges where intermittent streams flow.

Alluvial fans are often found at the foot of arid or semiarid mountain ranges where intermittent streams flow. An alluvial fan is a fan shaped deposit of gravel, sand and other smaller particles of sediment. 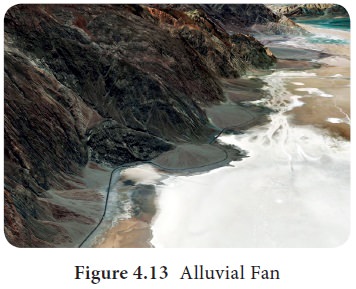 A meander is a winding curve or bend in a river. Meanders are the result of both erosional and depositional processes. They are typical landform of the middle and lower course of a river. This is formed by vertical erosion, lateral erosion, and deposition within the floodplain.

Oxbow lake is a free standing body of water formed when the meander is cut off from the main river. This landform is so named because it resembles horse shoe

5. Levees: Raised bed and a bank of the river due to frequent flooding and deposition of the sediments is called levees.

A flood plain is a flat area of land adjacent to a river. It stretches from the bank of its channel to the base of the enclosing valley walls which experiences flooding during the period of high discharge.

The inflow of both sea water and fresh water provide high levels of nutrients both in the water column and in sediment. Hence, it makes estuaries among the most productive natural habitats in the world. Narmada river estuary is located in Gujarat. 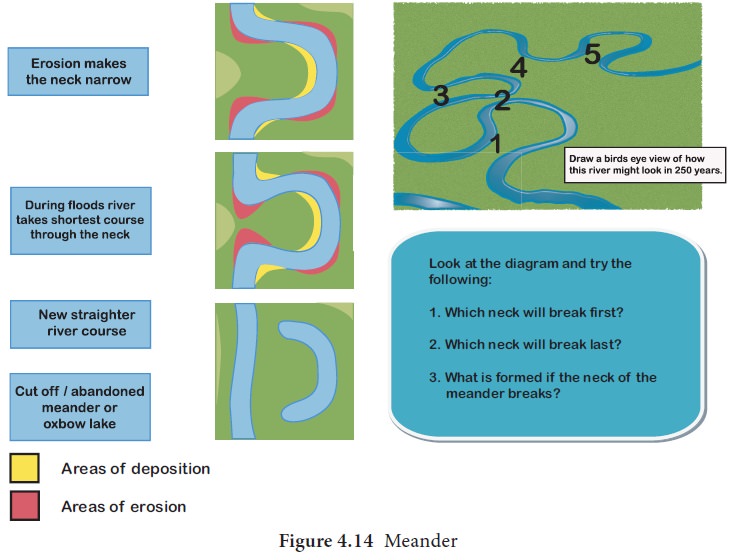