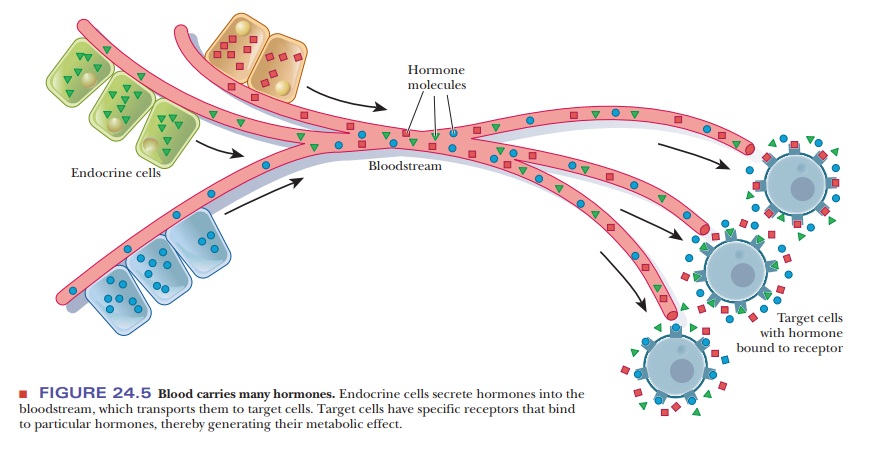 The metabolic processes within a given cell are frequently regulated by signals from outside the cell.

The metabolic processes within a given cell are frequently regulated by signals from outside the cell. A usual means of intercellular communication takes place through the workings of the endocrine system, in which the ductless glands produce hormones as intercellular messengers. 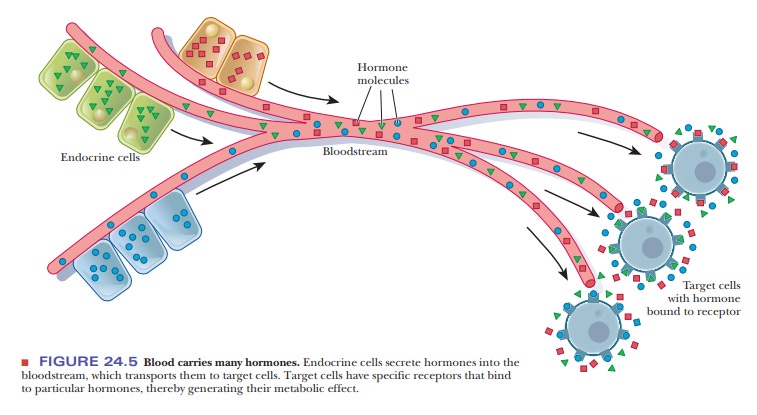 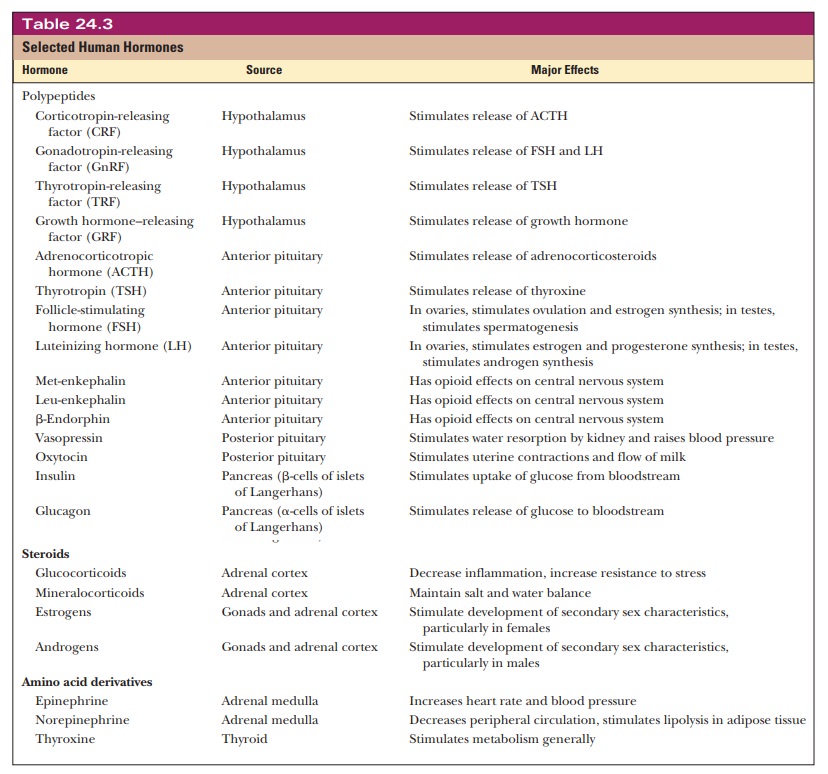 Hormones have several important functions in the body. They help main-tain homeostasis, the balance of biological activities in the body. The effect of insulin in keeping the blood glucose level within narrow limits is an example of this function. The operation of epinephrine and norepinephrine in the “fight-or-flight” response is an example of the way in which hormones medi-ate responses to external stimuli. Finally, hormones play roles in growth and development, as seen in the roles of growth hormone and the sex hormones. The methods and insights of biochemistry and physiology alike have helped illuminate the workings of the endocrine system.

The release of hormones exerts control on the cells of target organs; other control mechanisms, however, determine the workings of the endocrine gland that releases the hormone in question. Simple feedback mechanisms, in which the action of the hormone leads to feedback inhibition of the release of hor-mone, can be postulated (Figure 24.6). The workings of the endocrine system are, in fact, much less simple, with the added complexity allowing for a greater degree of control. To illustrate with a rather restricted example, insulin is released in response to a rapid rise in the level of blood glucose. In the absence of control mechanisms, an excess of insulin can produce hypoglycemia, the condition of low blood glucose. In addition to negative feedback control on the release of insulin, the action of the hormone glucagon tends to increase the level of glucose in the bloodstream. The two hormones together regulate blood glucose. 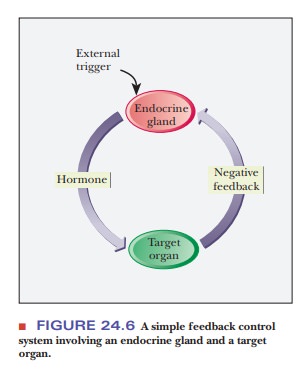 A more sophisticated control system involves the action of the hypothalamus, the pituitary, and specific endocrine glands (Figure 24.7). The central nervous system sends a signal to the hypothalamus. 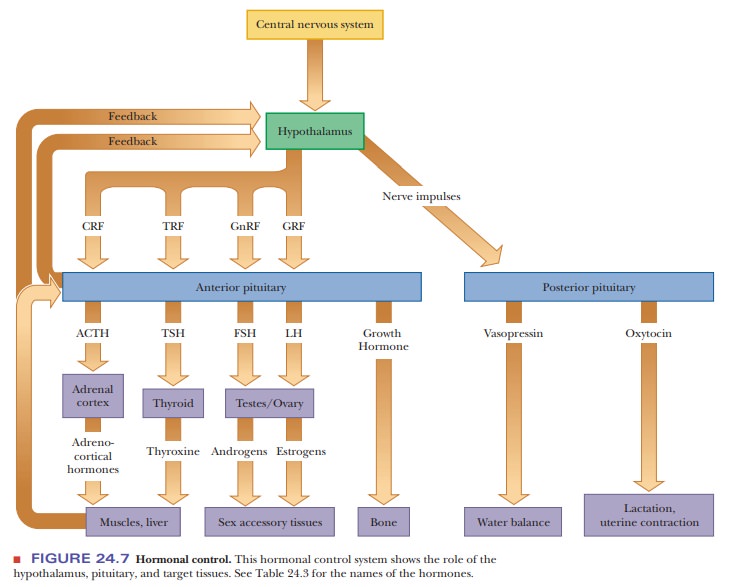 The hypothalamus secretes a hormone-releasing factor, which in turn stimulates release of a trophic hor-mone by the anterior pituitary (Table 24.3). (The action of the hypothalamus on the posterior pituitary is mediated by nerve impulses.) Trophic hormones act on specific endocrine glands, which release the hormones to be transported to target organs. Note that feedback control is exerted at every stage of the process. Even more fine-tuning is possible with zymogen activation mechanisms, which exist for many well-known hormones. 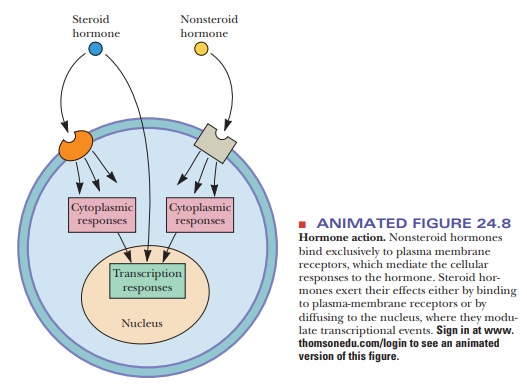 The releasing factors and trophic hormones listed in Table 24.3 tend to be polypeptides, but the chemical natures of the hormones released by specific endocrine glands show greater variation. Thyroxine, for example, produced by the thyroid, is an iodinated derivative of the amino acid tyrosine. Abnormally low levels of thyroxine lead to hypothyroidism, characterized by lethargy and obesity, whereas increased levels produce the opposite effect (hyperthyroidism). Low levels of iodine in the diet often lead to hypothyroid-ism and an enlarged thyroid gland (goiter). This condition has largely been eliminated by the addition of sodium iodide to commercial table salt (“iodized” salt). (It is virtually impossible to find table salt that is not iodized.)

Steroid hormones are produced by the adrenal cortex and the gonads (testes in males, ovaries in females). The adrenocortical hormones include glucocorticoids, which affect carbohydrate metabolism, modulate inflammatoryreactions, and are involved in reactions to stress. The mineralocorticoids control the level of excretion of water and salt by the kidneys. If the adrenal cortex does not function adequately, one result is Addison’s disease, characterized by hypogly-cemia, weakness, and increased susceptibility to stress. This disease is eventually fatal unless it is treated by administration of mineralocorticoids and glucocor-ticoids to make up for what is missing. The opposite condition, hyperfunction ofthe adrenal cortex, is frequently caused by a tumor of the adrenal cortex or of the pituitary. The characteristic clinical manifestation is Cushing’s syndrome, marked by hyperglycemia, water retention, and the easily recognized “moon face.”

The adrenal cortex produces some steroid sex hormones, the androgens and estrogens, but the main site of production is the gonads. Estrogens are requiredfor female sexual maturation and function, but not for embryonic sexual devel-opment of female mammals. Animals that are male genetically appear to be females if they are deprived of androgens during embryonic development. As a final example, we shall discuss growth hormone (GH), which is a polypeptide. When overproduction of GH occurs, it is usually because of a pituitary tumor. If this condition occurs while the skeleton is still growing, the result is gigantism. If the skeleton has stopped growing before the onset of GH overproduction, the result is acromegaly, characterized by enlarged hands, feet, and facial features. Underproduction of GH leads to dwarfism, but this condition can be treated by the injection of human GH before the skeleton reaches maturity. Animal GH is ineffective in treating dwarfism in humans. Supplies of human GH were very lim-ited when it could be obtained only from cadavers, but it can now be synthesized by recombinant DNA techniques. Human growth hormone (HGH) has recently become avail-able to individuals who believe it will help alleviate the effects of aging. It was known that the level of HGH decreases after middle age is reached. Many have assumed that the availability of growth hormone, if one could afford it, would be a virtual fountain of youth. Even though few results are conclusive at this time, HGH is being prescribed, and the medical community has adopted rules for its use. For example, doctors will consider prescribing it only for patients over age

The same hormone is also used illegally by endurance athletes, and there is currently no reliable test to stop this illegal use.