Hormones and the Control of Metabolism

Hormones and the Control of Metabolism

Now that we know something about the effects of hormones in triggering responses within the cell, we can return to and expand on some earlier points about metabolic control. We discussed some points about control mechanisms in carbohydrate metabolism. We saw at that time how glycolysis and gluconeogenesis can be regulated and how glycogen synthesis and breakdown can respond to the body’s needs. Phosphorylation and dephosphorylation of the appropriate enzymes played a large role there, and that whole scheme is subject to hormonal action.

Three hormones play a part in the regulation of carbohydrate metabolism: epinephrine, glucagon, and insulin. Epinephrine acts on muscle tissue to raise levels of glucose on demand, while glucagon acts on the liver, also to increase the availability of glucose. Feedback control plays a role in the process and ensures that the amount of glucose made available does not reach an excessive level. The role of insulin is to trigger the feedback response that achieves this further control.

Epinephrine (also called adrenalin) is structurally related to the amino acid tyrosine. Epinephrine is released from the adrenal glands in response to stress (the “fight or flight” response). When it binds to specific receptors, it sets off a chain of events that leads to increased levels of glucose in the blood, increased glycolysis in muscle cells, and increased breakdown of fatty acids for energy. Glucagon (a peptide that contains 29 amino acid residues) is released by the  α-cells of the islets of Langerhans in the pancreas, and it too binds to specificreceptors to set off a chain of events to make glucose available to the organ-ism. Each time a single hormone molecule, whether epinephrine or glucagon, binds to its specific receptor, it activates a number of stimulatory G proteins. This effect starts an amplification of the hormonal signal. Each active G protein in turn stimulates adenylate cyclase several times before the G protein is inacti-vated by its own GTPase activity, leading to still more amplification. The cAMP produced by the increased adenylate cyclase activity allows for increased activity of the cAMP-dependent protein kinase, phosphorylating target enzymes that lead to increased glucose levels. In particular, this means an increase in the activity of the enzymes involved in gluconeogenesis and glycogen breakdown as well as a decrease in the activity of enzymes involved in glycolysis and glycogen synthesis. The series of amplifying steps is called a cascade, and the cumulative effect is the underlying reason why small amounts of hormones can have such marked effects. 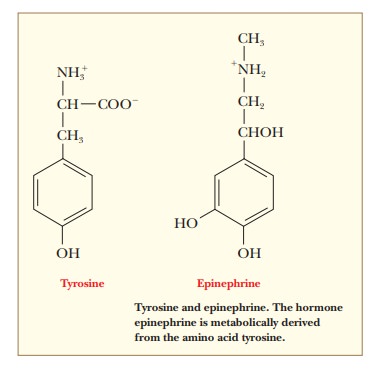 Figure 24.14 shows how the binding of epinephrine to specific receptors leads to increased glycogen breakdown in muscle and suppression of glycogen synthesis. The hormonal stimulation leads to activation of adenylate cyclase, which in turn activates the cAMP-dependent protein kinase responsible for activating glycogen phosphorylase and inactivating glycogen synthase. 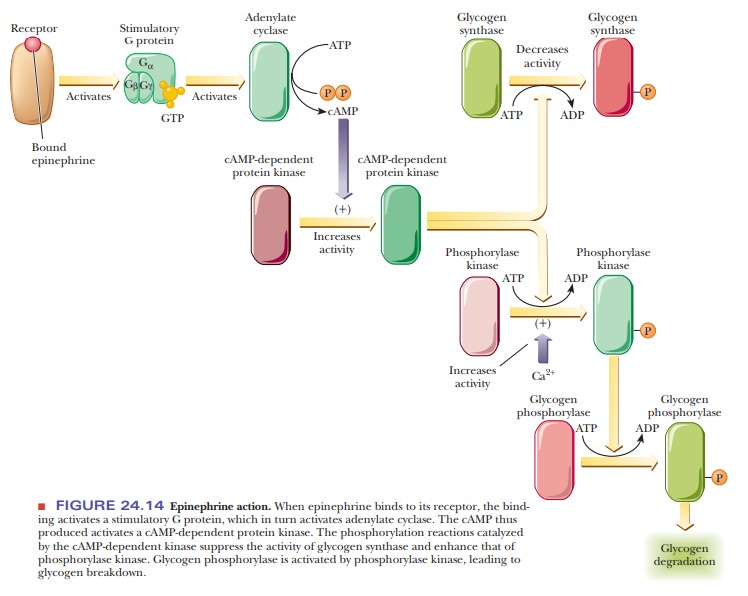 The effect of glucagon binding to receptors in stimulating gluconeogenesis in the liver and suppressing glycolysis depends on changes in the concentra-tion of the key allosteric effector, fructose-2,6-bisphosphate (F2,6P). Recall that this compound is an important allosteric activator of phosphofructokinase, the key enzyme of glycolysis; it is also an inhibitor of fructose-bisphosphate phosphatase, which plays a role in gluconeogenesis. A high concentration of F2,6P stimulates glycolysis, whereas a low concentration stimulates gluconeogenesis. The concentration of F2,6P in a cell depends on the balance between its synthesis [catalyzed by phosphofructokinase-2 (PFK-2)] and its breakdown [catalyzed by fructose-bisphosphatase-2 (FBPase-2)]. 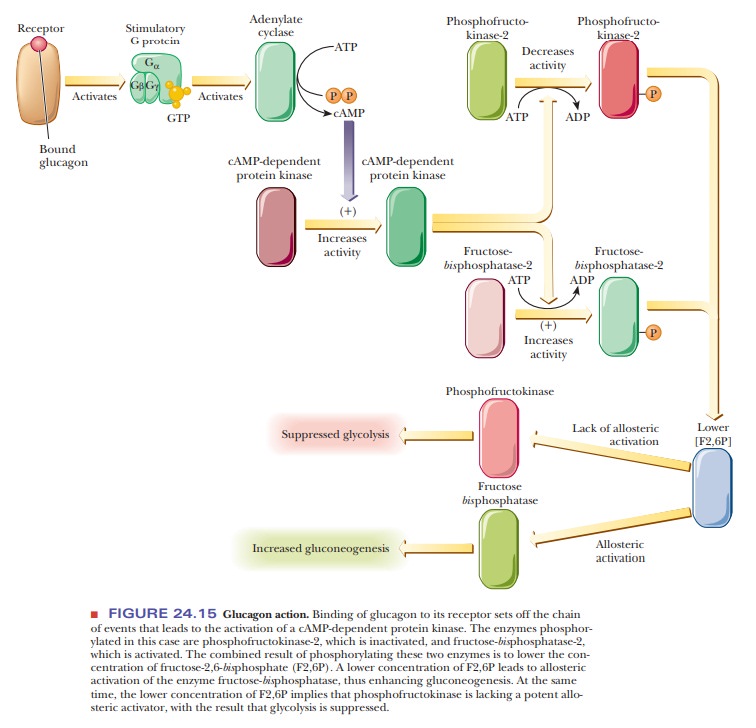 The enzyme activities (on a single multifunctional protein) that control the formation and breakdown of F2,6P are themselves controlled by a phosphorylation/dephosphorylation mechanism, which in turn is subject to the same sort of hormonal control we just discussed for the enzymes of glycogen metabolism. Figure 24.15 summarizes the chain of events that leads to increased gluconeo-genesis in the liver as a result of the binding of glucagon to its specific receptor. The following Biochemical Connections box discusses the role of insulin in overall metabolism and some current dieting trends.

When a hormone binds to its receptor on the plasma membrane of a tar-get cell, it sets off a cascade of reactions by which second messengers elicit the actual cellular response.

Two of the most important second messengers, cyclic AMP (cAMP) and phosphatidylinositol-4,5-bisphosphate (PIP2), activate protein kinases, which phosphorylate key enzymes. Calcium ion is intimately involved in the action of PIP2.

Epinephrine stimulates adenylate cyclase in muscle cells, leading to activa-tion of cAMP-dependent protein kinase. This ultimately leads to activation of glycogen phosphorylase and degradation of glycogen for energy.

Glucagon stimulates adenylate cyclase in liver cells, leading to activation of cAMP-dependent protein kinase. This leads to inhibition of phospho-fructokinase-2 and activation of fructose bisphosphatase-2. This lowers the level of fructose-2,6-bisphosphate, which suppresses glycolysis and stimulates gluconeogenesis in the liver, leading to increased glucose production.

Hormonal triggering can be added to other levels of control of metabo-lism, such as allosteric activation and covalent modification, to ensure an efficient response to the needs of the organism.