Insulin and Its Effects

To the average person, insulin is best known as the hormone that is deficient in people with diabetes, and it certainly was this relationship that spurred on the study of this fascinating hormone.

Insulin and Its Effects

To the average person, insulin is best known as the hormone that is deficient in people with diabetes, and it certainly was this relationship that spurred on the study of this fascinating hormone. We are just now realizing that insulin is involved in many cellular processes and in many different ways from what was previously thought.

Insulin is a peptide hormone secreted from the pancreas. In its active form, it is a 51-amino-acid peptide with two different chains, the A chain and the B chain, held together by disulfide bonds. As described, insulin was one of the first proteins to be cloned and expressed for human need. Insulin is created as an 86-residue precursor, called proinsulin. Residues 31 to 65 of proinsulin are removed proteolytically to give the active form. The sequence of human insulin is shown in Figure 24.16.

As we saw, the insulin receptor is a member of the class of tyrosine receptor kinases. When insulin binds to receptor sites on the extracellular side of a cell membrane, it triggers the β-subunit to autophosphorylate a tyrosine residue on its interior portion, as shown in Figure 24.17. Once the tyrosines on the receptor are phosphorylated, the receptor then phosphorylates tyrosines on target proteins, called insulin-receptor substrates (IRSs), which then act as the second messengers to produce a wide variety of cellular effects. 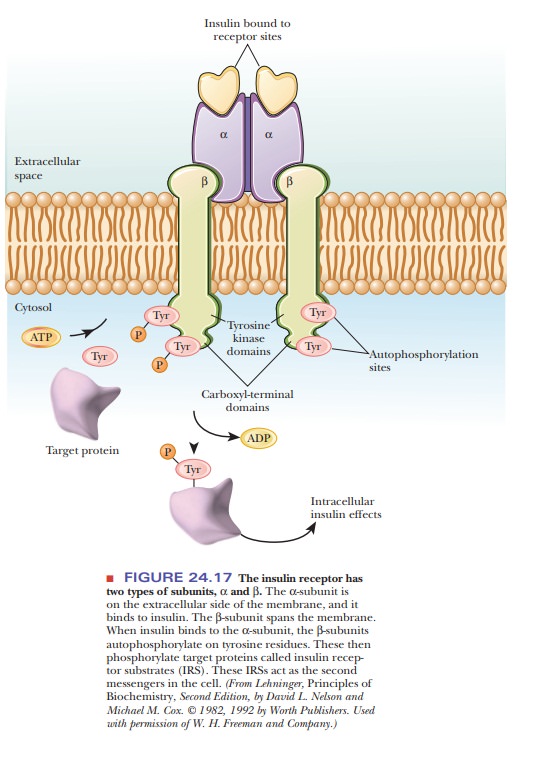 What does insulin do?

The body cannot tolerate great changes in the level of blood glucose. Insulin’s primary job is to clear glucose out of the blood, and it does so by increasing the transport of glucose from the blood to muscle cells and adipocytes. Using mechanisms still being studied, insulin signaling leads to movement of a glucose-transporter protein called GLUT4 from intracellular vesicles to the cell membrane. Once in the cell membrane, the GLUT4 protein allows more glucose to enter the cell, lowering the blood glucose level.

Insulin is best known for this effect. Failure of glucose transport is the main characteristic of, and the acute risk associated with, diabetes.

Insulin affects the activity of many enzymes, most of which are involved in getting rid of glucose. However, fat metabolism is also affected. Glucokinase is a liver enzyme that phosphorylates glucose to glucose-6-phosphate. It is induced by insulin, so that when insulin is present, glucose in the liver is sent toward catabolic pathways, such as pentose phosphate or glycolysis. Insulin also activates liver glycogen synthase and deactivates glycogen phosphorylase, causing glucose to be put into a polymeric form. In addition, insulin stimulates glycolysis through activation of phosphofructokinase and pyruvate dehydrogenase. Insulin also has a large effect on fatty-acid metabolism. It increases fatty-acid synthesis via stimulation of acetyl-CoA carboxylase (ACC), and it increases triacylglycerol synthesis in the liver through activation of lipoprotein lipase. It also increases cholesterol synthesis via activation of hydroxymethylglutaryl-CoA reductase. Table 24.4 summarizes the effects of insulin on metabolism.

Much has been learned about insulin because of its relationship with diabetes. In classical, type I diabetes (or insulin-dependent diabetes), the individual does not make insulin, or at least not enough of it. This is usually caused by destruction of the beta cells of the islets of Langerhans in the pancreas from a type of autoimmune disease. The only remedy for type I diabetes is regular insulin injections, and insulin is produced for this purpose by recombinant DNA technology.

diabetes (or non-insulin-dependent diabetes), which is characterized by cells not responding correctly to insulin. In these cases, the person may make a normal amount of the hormone, but it does not have sufficient effect, either because it does not bind correctly to the receptor, or because the receptor does not correctly transmit the second messenger. This disease often begins later in life and is then called adult-onset diabetes. Whereas people with type I diabetes are often thin, people with type II diabetes are often obese. Evidence suggests that type II diabetes in the elderly is related to dysfunction of muscle mitochondria.

One of the most recent discoveries is that people with type II diabetes also have an increased risk of Alzheimer’s disease. In this type of diabetes, insulin is increased because it takes more insulin to accomplish the same clearance of glucose into the cells. Insulin appears to increase levels of the β-amyloid pro-tein that forms plaques in the brain. A brain protein called insulin-degradingenzyme (IDE) is involved in binding to and degrading insulin. This enzyme alsobinds to β-amyloid protein and clears it from the brain. When insulin levels are high, IDE spends more time tied up with insulin and less time clearing the β-amyloid protein. Because insulin is produced in high quantities when a per-son eats a high-carbohydrate meal, one could easily theorize that the increasing number of people getting Alzheimer’s disease could be tied to our fast-food, high-sugar diet and lifestyle.

Athletes must be able control their diets for maximum performance. Insulin plays a large role in the choice of a pre-race breakfast for aerobic athletes. If an athlete eats a large, carbohydrate-filled breakfast in the morning, there is a rise

in blood glucose, followed by a rise in insulin. This often leads to a fall in blood glucose below the baseline level. It may take hours for the blood glucose levels to come back up. In addition, the high insulin level would cause activation of fat and glycogen synthesis and would inhibit glycogen breakdown. Thus, for a period of time after the high-carbohydrate breakfast, the athlete would be essentially running on empty. For this reason, many runners do not eat before a morning event, or, if they do, they eat little and avoid large amounts of high-glycemic-index foods. Athletes often drink coffee or tea in the morning. Besides the general stimulation of the central nervous system, caffeine also inhibits insulin production and stimulates fat mobilization.

Insulin’s primary job is to stimulate the glucose transporters in muscle— particularly the GLUT4 transporter—to take up glucose from the blood.

In addition, insulin has a wide range of intracellular effects, such as switch-ing off glycogen breakdown and turning on glycogen synthesis, stimulat-ing glycolysis in the liver and muscle, turning off gluconeogenesis in the liver, and stimulating fatty-acid synthesis and storage.

A recent discovery is that elevated levels of insulin in the blood may be related to Alzheimer’s disease.

Physical training appears to increase the sensitivity of the GLUT4 trans-porter to insulin so that an athlete needs less insulin to clear glucose out of the blood than a sedentary person.