How do second messengers work? Cyclic AMP and G Proteins

Cyclic AMP (adenosine-3',5'-monophosphate, cAMP) is one example of a second messenger.

How do second messengers work?

Cyclic AMP (adenosine-3',5'-monophosphate, cAMP) is one example of a second messenger. The mode of action starts with binding of a hormone to a specific receptor called a β1- or β2-adrenergic receptor, which triggers the production of cAMP from ATP, catalyzed by adenylate cyclase.

This reaction is mediated by a stimulatory G protein, a trimer consisting of three subunits—α, β, and γ. Binding of the hormone to the receptor activates the G protein; the α-subunit binds GTP while releasing GDP, giving rise to the name of the protein. The active protein has GTPase activity and slowly hydrolyzes GTP, returning the G protein to the inactive state. GDP remains bound to the α-subunit and must be exchanged for GTP when the protein is activated the next time (Figure 24.9). The G protein and adenylate cyclase are bound to the plasma membrane, while cAMP is released into the interior of the cell to act as a second messenger. As we have already seen in several pathways, cAMP stimulates protein kinase A, which phosphorylates a host of enzymes and transcription factors. Some examples are known in which the binding of hormone to receptor (anα2-receptor) inhibits rather than stimulates adenylate cyclase. A G protein with a different kind of α-subunit mediates the process. The modified G protein is referred to as aninhibitory G protein to distinguish it from the kind that stimulates response tohormone binding (Figure 24.10). 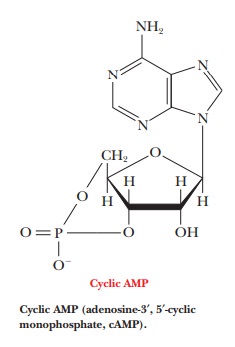 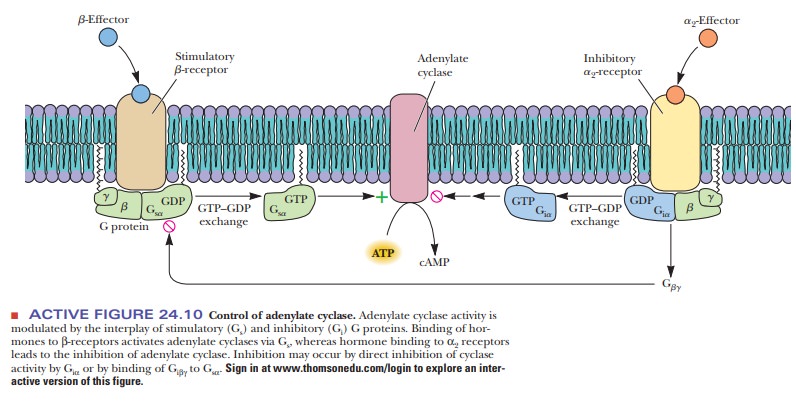 In eukaryotic cells, the usual mode of action of cAMP is to stimulate a cAMP-dependent protein kinase, a tetramer consisting of two regulatory subunits and two catalytic subunits. When cAMP binds to the dimer of regulatory subunits, the two active catalytic subunits are released. The active kinase catalyzes the phosphorylation of a target enzyme or transcription factor (Figure 24.11). In the scheme shown in Figure 24.11, phosphorylation activates the enzyme. Cases are also known in which phosphorylation inactivates a target enzyme. The usual site of phosphorylation is the hydroxyl group of a serine or a threonine. ATP is the source of the phosphate group that is trans-ferred to the enzyme. The target enzyme then elicits the cellular response. 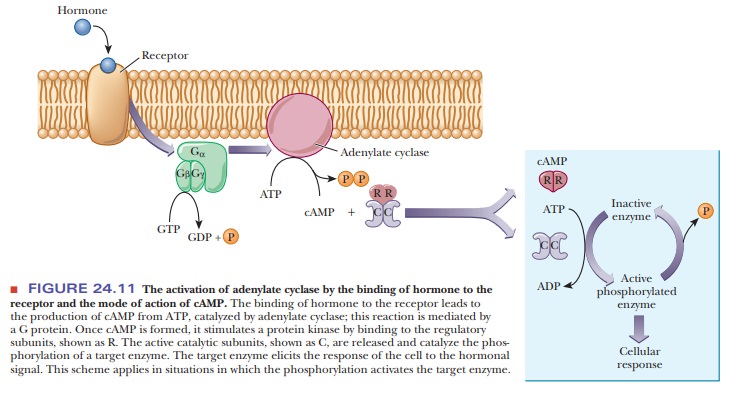 G proteins are very important signaling molecules in eukaryotes. They can be activated by combinations of hormones. For example, both epinephrine and glucagon act via a stimulatory G protein in liver cells. The effect can be cumulative, so that if both glucagons and epinephrine have been released, the cellular effect is greater. Besides the effect on cAMP, G proteins are involved in activating many other cellular processes, including stimulating phospholipase C and opening or closing membrane ion channels.

A G protein is permanently activated by cholera toxin, leading to excessive stimulation of adenylate cyclase and chronic elevation of cAMP levels. The main danger in cholera, caused by the bacterium Vibrio cholerae, is severe dehy-dration as a result of diarrhea. The unregulated activity of adenylate cyclase in epithelial cells leads to the diarrhea because cAMP in epithelial cells stimulates active transport of Na+. Excessive cAMP in the epithelial cells of the small intes-tine produces a large flow of Na+ and water from the mucosal surface of the epithelial cells into the lumen of the intestine. If the lost fluid and salts can be replaced in cholera victims, the immune system can eliminate the actual infec-tion within a few days.