Alcohol is the most abused drug in America, and alcoholism is among the most common diseases.

Alcohol is the most abused drug in America, and alcoholism is among the most common diseases. Statistics about deaths due to drunk driving are available, but no one knows how many other accidental deaths may be indirectly caused by alcohol. Many believe that some particular biochemistry must be associated with alcoholism. There is certainly a genetic trait, shown most forcefully in a benchmark study of identical twins raised apart from each other. Attempts to find “the gene for alcoholism” have not, however, met with success. A complex genetic relationship is likely to be involved.

Alcohol dehydrogenase is an inducible enzyme. Its level increases in response to alcohol use. The first reaction occurs very rapidly in alcoholics, so the intoxicating effect of alcohol is actually reduced (i.e., less intoxication per ounce). Alcoholics can tolerate blood alcohol levels that would be lethal to others. For everyone, the second reaction is rate-limiting. Acetaldehyde can cause headaches, nausea, and hangovers. Malnutrition is common among alcoholics because alcohol is a source of “empty calories” without important nutrients, particularly vitamins. 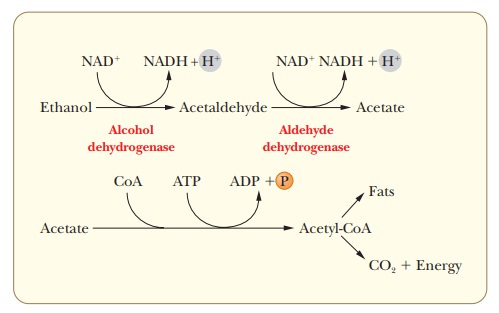 Biochemical, psychological, and nutritional effects of alcohol are not the same for all people. The studies of twins indicate the possibility of a “born” alcoholic who could be totally hooked on the first drink. Fetal alcohol syndrome is of particular concern to women. Ethanol is a teratogen; there is no “safe” level of alcohol during pregnancy. Fetal alcohol syndrome occurs in up to 5 of every 1000 births. Indicators include stunted growth, dysfunction of the cen-tral nervous system, and a characteristic facial shape.

Clearly, biochemistry is involved in addiction. Because many of the psychoactive drugs are structural analogs of serotonin and epinephrine, it is easy to imagine enhancement of their effects or competition with them. There is increasing interest in the effects of drugs (in general) on the production of endorphins and enkephalins, the short peptides that are the brain’s own opiate painkillers. In people who are not alcohol-ics, ethanol inhibits enkephalin synthesis because the pleasant effect of alcohol replaces the need for enkephalins. Part of the misery of a hangover is caused by the lack of enkephalins; the hangover usually lasts until the level of these compounds returns to normal.