What Is a Reasonable Result for a Collaborative Study?

Collaborative testing provides a means for estimating the variability (or repro- ducibility) among analysts in different labs.

What Is a Reasonable Result for a Collaborative Study?

Collaborative testing provides a means for estimating the variability (or repro- ducibility) among analysts in different labs. If the variability is significant, we can determine that portion due to random errors traceable to the method (σrand) and that due to systematic differences between the analysts (σsys). In the previous two sections we saw how a two-sample collaborative test, or an analysis of variance can be used to estimate σrand and σsys (or σ2rand and σ2sys). We have not considered, however, what is a reasonable value for a method’sreproducibility.

An analysis of nearly 10,000 collaborative studies suggests that a reasonable es- timate for a method’s reproducibility is

Equation 14.26 appears to be independent of the type of analyte, the type of matrix, and the method of analysis. 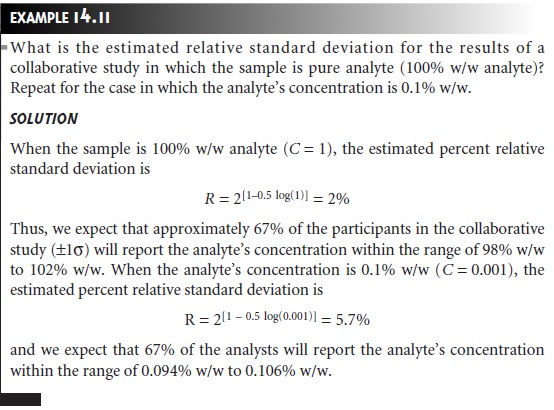 Of course, equation 14.26 only provides an estimate of the variability in results submitted by those participating in a collaborative study. A relative standard devia- tion that is within one-half to twice the estimated value suggests that the method performs acceptably when used by analysts in different laboratories. The percent relative standard deviation for a single analyst should be one-half to two-thirds that for the variability between analysts.