One of the most effective ways to think about optimization is to visualize how a system’s response changes when we increase or decrease the levels of one or more of its factors. 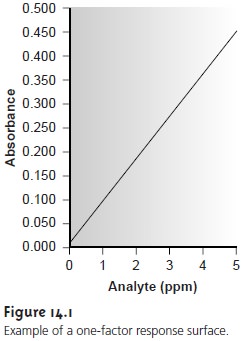 The response surface in Figure 14.1, for example, is

where A is the absorbance, and CA is the analyte’s concentration in parts per million.

where R is the response, and A and B are the factor levels. Alternatively, we may represent a two-factor response surface as a contour plot, in which contour lines in- dicate the magnitude of the response (Figure 14.2b). 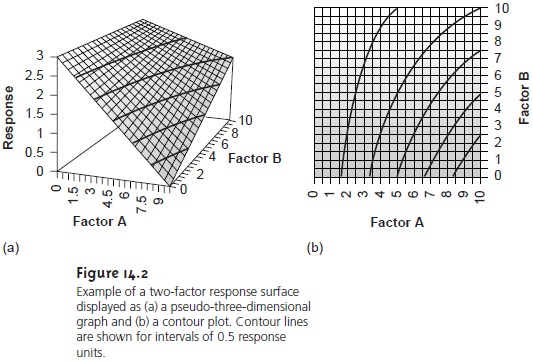 The response surfaces in Figure 14.2 are plotted for a limited range of factor levels (0 =< A =< 10, 0 =< B =< 10), but can be extended toward more positive or more negative values. This is an example of an unconstrained response surface. Most re- sponse surfaces of interest to analytical chemists, however, are naturally constrained by the nature of the factors or the response or are constrained by practical limits set by the analyst. The response surface in Figure 14.1, for example, has a natural con- straint on its factor since the smallest possible concentration for the analyte is zero. Furthermore, an upper limit exists because it is usually undesirable to extrapolate a calibration curve beyond the highest concentration standard.