Imagine that you wish to climb to the top of a mountain.

Imagine that you wish to climb to the top of a mountain. Because the mountain is covered with trees that obscure its shape, the shortest path to the summit is un- known. Nevertheless, you can reach the summit by always walking in a direction that moves you to a higher elevation. The route followed (Figure 14.3) is the result of a systematic search for the summit. Of course, many routes are possible leading from the initial starting point to the summit. The route taken, therefore, is deter- mined by the set of rules (the algorithm) used to determine the direction of each step. For example, one algorithm for climbing a mountain is to always move in the direction that has the steepest slope. 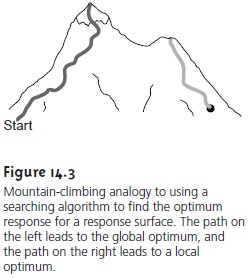 A searching algorithm is characterized by its effec- tiveness and its efficiency. To be effective, the experimentally determined optimum should closely coincide with the system’s true optimum. A searching algorithm may fail to find the true optimum for several reasons, including a poorly designed algo- rithm, uncertainty in measuring the response, and the presence of local optima. A poorly designed algorithm may prematurely end the search. For example, an algo- rithm for climbing a mountain that allows movement to the north, south, east, or west will fail to find a summit that can only be reached by moving to the northwest.

When measuring the response is subject to relatively large random errors, or noise, a spuriously high response may produce a false optimum from which the searching algorithm cannot move. When climbing a mountain, boulders encoun- tered along the way are examples of “noise” that must be avoided if the true opti- mum is to be found. The effect of noise can be minimized by increasing the size of the individual steps such that the change in response is larger than the noise.

Finally, a response surface may contain several local optima, only one of which is the system’s true, or global, optimum. This is a problem because a set of initial conditions near a local optimum may be unable to move toward the global opti- mum. The mountain shown in Figure 14.3, for example, contains two peaks, with the peak on the left being the true summit. A search for the summit beginning at the position identified by the dot may find the local peak instead of the true sum- mit. Ideally, a searching algorithm should reach the global optimum regardless of the initial set of factor levels. One way to evaluate a searching algorithm’s effective- ness, therefore, is to use several sets of initial factor levels, finding the optimum re- sponse for each, and comparing the results.

A second desirable characteristic for a searching algorithm is efficiency. An effi- cient algorithm moves from the initial set of factor levels to the optimum response in as few steps as possible. The rate at which the optimum is approached can be in- creased by taking larger steps. If the step size is too large, however, the difference between the experimental optimum and the true optimum may be unacceptably large. One solution is to adjust the step size during the search, using larger steps at the beginning, and smaller steps as the optimum response is approached.

A one-factor-at-a-time optimization is consistent with a commonly held belief that to determine the influ- ence of one factor it is necessary to hold constant all other factors. This is an effective, although not necessarily an ef- ficient, experimental design when the factors are independent. Two factors are considered independent when changing the level of one factor does not influence the effect of changing the other factor’s level. Table 14.1 provides an example of two in- dependent factors.

When factor B is held at level B1, changing factor A from level A1 to level A2 increases the response from 40 to 80; thus, the change in response, ∆R, is

In the same manner, when factor B is at level B2, we find that 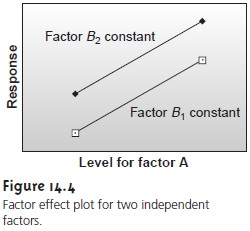 The resulting response surface for equation 14.1 is shown in Figure 14.5. 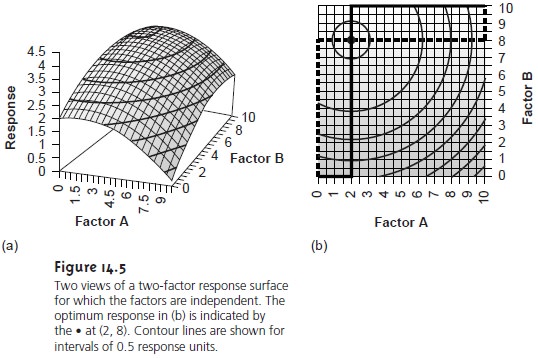 The progress of a searching algorithm is best followed by mapping its path on a contour plot of the response surface. Positions on the response surface are identified as (a, b) where a and b are the levels for factors A and B. Four examples of a one- factor-at-a-time optimization of the response surface for equation 14.1 are shown in Figure 14.5b. For those paths indicated by a solid line, factor A is optimized first, followed by factor B. The order of optimization is reversed for paths marked by a dashed line. The effectiveness of this algorithm for optimizing independent factors is shown by the fact that the optimum response at (2, 8) is reached in a single cycle from any set of initial factor levels. Further- more, it does not matter which factor is optimized first. Although this algorithm is effective at locating the opti- mum response, its efficiency is limited by requiring that only a single factor can be changed at a time.

Unfortunately, it is more common to find that two factors are not independent. In Table 14.2, for instance, changing the level of factor B from level B1 to level B2 has a significant effect on the response when factor A is at level A1

but has no effect when factor A is at level A2.

This effect is seen graphically in Figure 14.6. Factors that are not independent are said to interact. In this case the equation for the response includes an interaction term in which both factors A and B are present. Equation 14.2, for example, con- tains a final term accounting for the interaction between the factors A and B.

The resulting response surface for equation 14.2 is shown in Figure 14.7a. 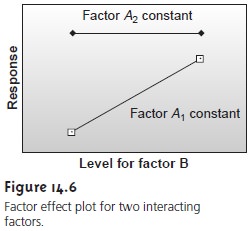 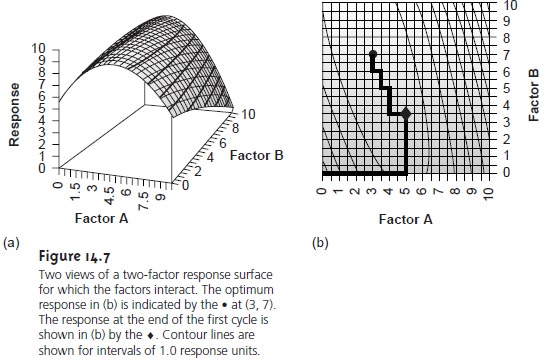 The progress of a one-factor-at-a-time optimization for the response surface given by equation 14.2 is shown in Figure 14.7b. In this case the optimum response of (3, 7) is not reached in a single cycle. If we start at (0, 0), for example, optimizing factor A follows the solid line to the point (5, 0). Optimizing factor B completes the first cycle at the point (5, 3.5). If our algorithm allows for only a single cycle, then the optimum response is not found. The optimum response usually can be reached by continuing the search through additional cycles, as shown in Figure 14.7b. Theefficiency of a one-factor-at-a-time searching algorithm is significantly less whenX the factors interact. An additional complication with interacting factors is the possi- bility that the search will end prematurely on a ridge of the response surface, wherea change in level for any single factor results in a smaller response (Figure 14.8). 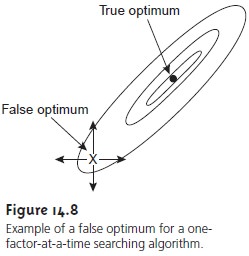 The efficiency of a searching algorithm is improved by al- lowing more than one factor to be changed at a time. A convenient way to accom- plish this with two factors is to select three sets of initial factor levels, positioned as the vertices of a triangle (Figure 14.9), and to measure the response for each. The set of factor levels giving the smallest response is rejected and replaced with a new set of factor levels using a set of rules. This process is continued until no further optimiza- tion is possible. The set of factor levels is called a simplex. In general, for k factors a simplex is a (k + 1)-dimensional geometric figure. 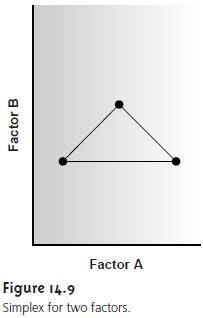 Rule 1. Rank the response for each vertex of the simplex from best to worst.

Rule 4. Boundary conditions are a useful way to limit the range of possible factor levels. For example, it may be necessary to limit the concentration of a factor  for solubility reasons or to limit temperature due to a reagent’s thermal stability. If the new vertex exceeds a boundary condition, then assign it a response lower than all other responses, and follow rule 3.

Because the size of the simplex remains constant during the search, this algorithm is called a fixed-sized simplex optimization. Example 14.1 illustrates the application of these rules. 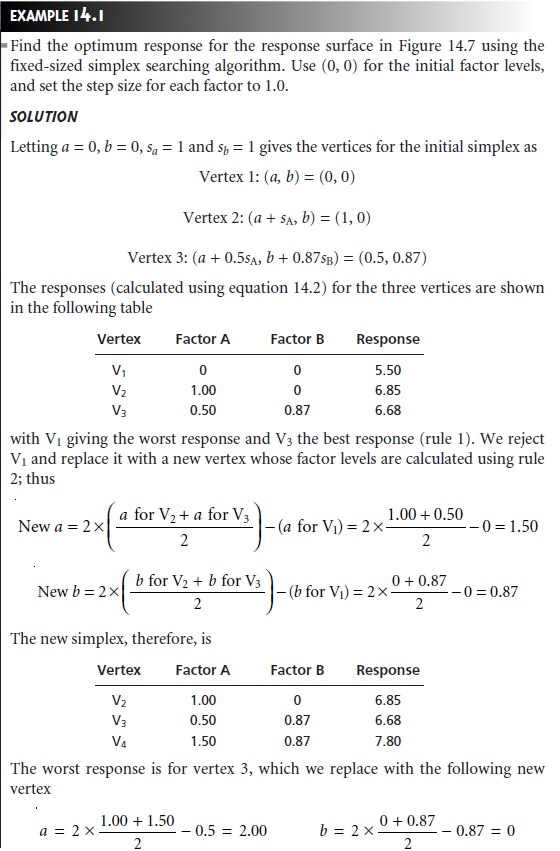 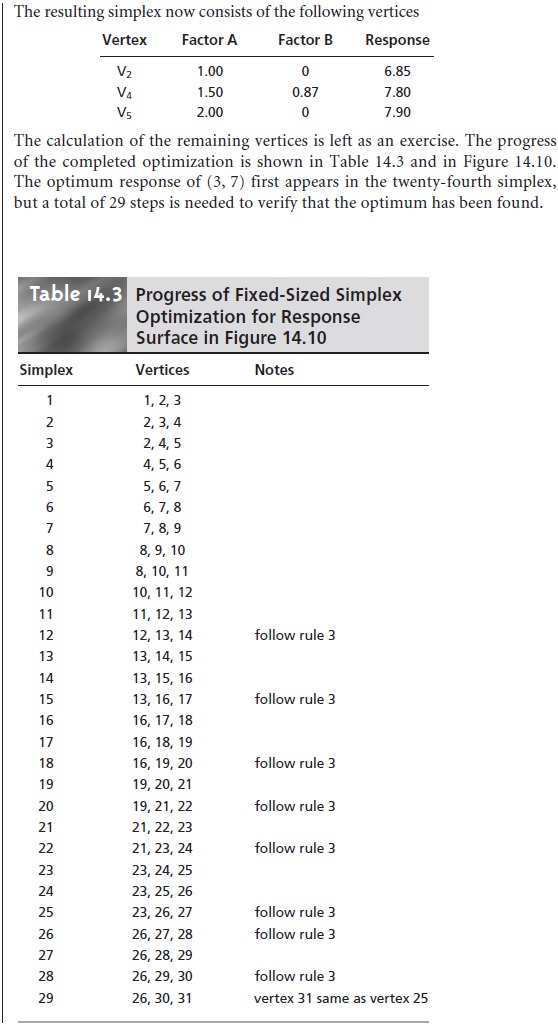 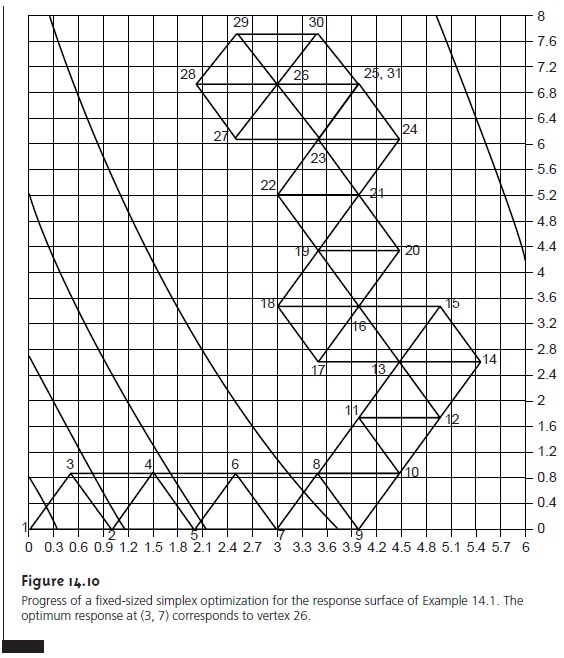 The fixed-size simplex searching algorithm is effective at locating the optimum response for both independent and interacting factors. Its efficiency, however, is limited by the simplex’s size. We can increase its efficiency by allowing the size of the simplex to expand or contract in response to the rate at which the optimum is being approached.3,6 Although the algorithm for a variable-sized simplex is not pre- sented here, an example of its increased efficiency is shown Figure 14.11. The refer- ences and suggested readings may be consulted for further details. 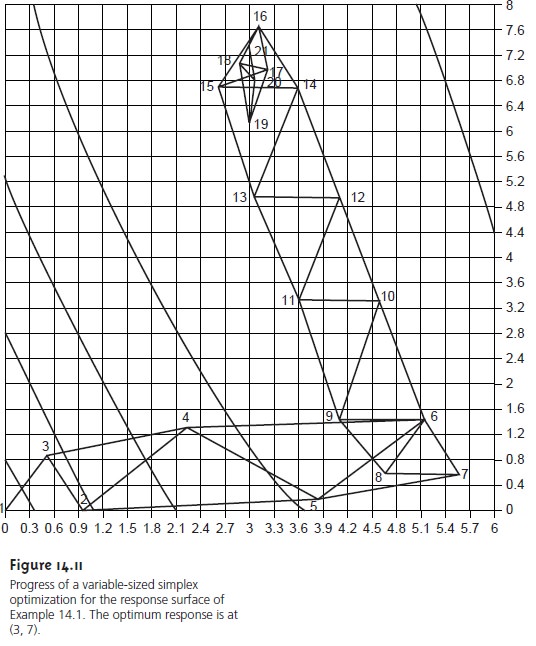