Validating the Method as a Standard Method

Validating the Method as a Standard Method

For an analytical method to be of use, it must be capable of producing results with acceptable accuracy and precision. The process of verifying a method as de- scribed in the previous section determines whether the method meets this goal for a single analyst. A further requirement for a standard method is that an analysis should not be affected by a change in the analyst performing the work, the laboratory in which the work is performed, or the time when the analysis is conducted. The process by which a method is approved for general use is known as validation and involves a collaborative test of the method by analysts in sev- eral laboratories. Collaborative testing is used routinely by regulatory agencies and professional organizations, such as the U.S. Environmental Protection Agency, the American Society for Testing and Materials, the Association of Offi- cial Analytical Chemists, and the American Public Health Association, in estab- lishing their standard methods of analysis.

When an analyst performs a single analysis on a sample, the difference be- tween the experimentally determined value and the expected value is influenced by three sources of error: random error, systematic errors inherent to the method, and systematic errors unique to the analyst. If enough replicate analyses are performed, a distribution of results can be plotted (Figure 14.16a). The width of this distribution is described by the standard deviation and can be used to de- termine the effect of random error on the analysis. The position of the distribu- tion relative to the sample’s true value, μ, is determined both by systematic er- rors inherent to the method and those systematic errors unique to the analyst. For a single analyst there is no way to separate the total systematic error into its component parts. 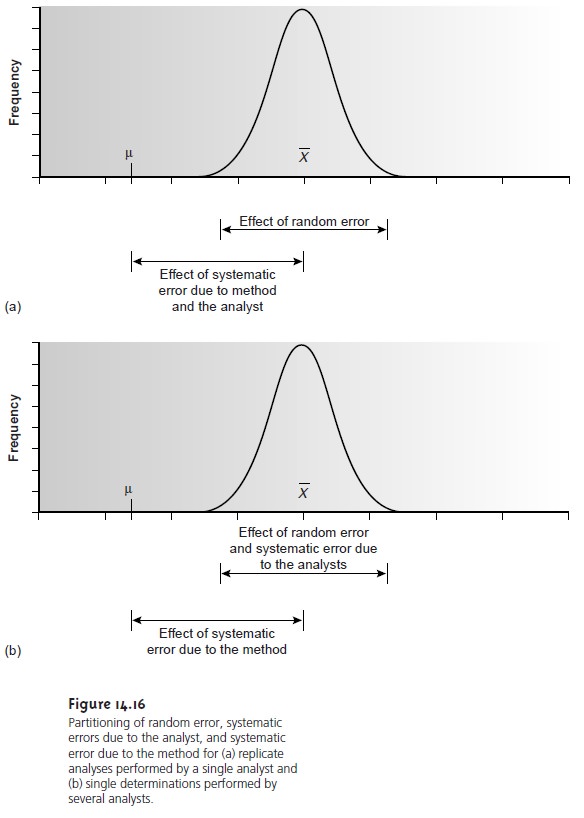 The goal of a collaborative test is to determine the expected magnitude of all three sources of error when a method is placed into general practice. When several analysts each analyze the same sample one time, the variation in their col- lective results (Figure 14.16b) includes contributions from random errors and those systematic errors (biases) unique to the analysts. Without additional infor- mation, the standard deviation for the pooled data cannot be used to separate the precision of the analysis from the systematic errors of the analysts. The posi- tion of the distribution, however, can be used to detect the presence of a system- atic error in the method.