Water is vital for human existence. Water is the largest component of the human body, making up to 60 to 70 percent of the total body’s weight.

Water is vital for human existence. Water is the largest component of the human body, making up to 60 to 70 percent of the total body’s weight. This percentage of water in human being is required to be maintained by water as a foodstuff. Infants have greater percentage of water than adults. Old age declines the water percentage of the body. Water is second only to oxygen in its vital importance to the body. One can live without food for a longer time than one does without water. Water is colourless, calorie less componud of hydrogen and oxygen that virtually every cell in the body needs to survive.

Substances dissolve in water as ions with positive and negative charge. They are called electrolytes. The common electrolytes in our body are sodium, potassium and chloride. Because of this, water can dissolve most substances and in doing so, it enables minerals and other chemicals to undergo biological reactions in the body.

Distribution of water in the body:

Total body water content is mainly determined by total amount of salt in the body. Salt and water concentration in the body is controlled by the kidneys. 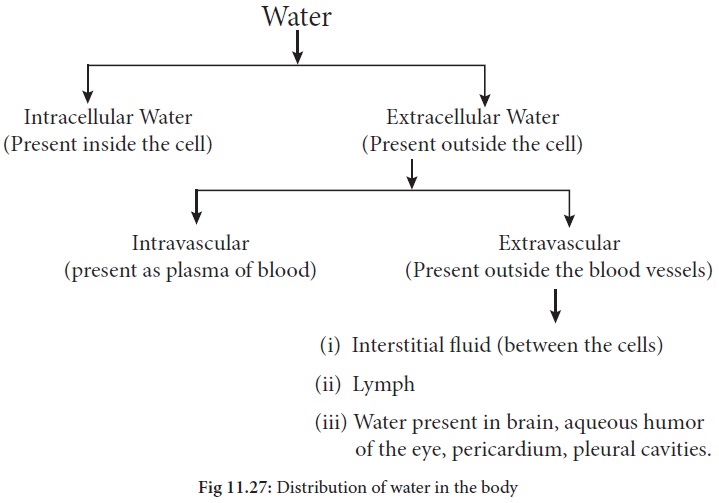 Water flows in and out of the body cells through cell membranes.

Fluid contained within a cell represents about two thirds of all body fluids.

Fluid present outside the cells, it includes intravascular and interstitial fluids; represents about one-third of all body fluid.

2.      In addition to water,  ingested fluids such as ghee (milk-based preparation). Soups and beverages also supply essential minerals and vitamins.

3.      Metabolic water is formed by the metabolism of food in the body. It may amount to about 450ml per day.

·         Carrier of Food Nutrients: Every nutrient in soluble form in water is carried from intestines to tissues through blood.

·         Constituent of Liquid: Water is the major constituent of all liquids of body as blood, urine, sweat, lymph.

·         Regulate body temperature: Water helps to regulate and control body temperature. Heat is produced when food is burnt for energy. Water is evaporated through respiration and sweat and body temperature is maintained normal. Body’s heat is lost through the skin, lungs, urine and faeces.

·         Safety/Security of Delicate Organs: Water is around lungs, heart, brain which protects them from outer injury. Thus provide security to these organs and thereby to human being.

·         Water as lubricant: Water acts as lubricant in joints. Water around joints help normal circulation process in cells. It is an essential constituent of all the cells of the body and the internal environment. 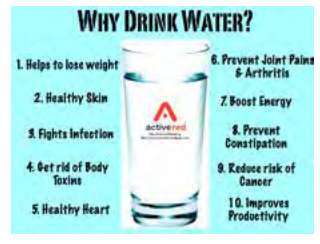 Requirement of water varies with climate, dietary constituents, activities and surface area of the body. As a rule a person should take enough water to excrete about 1200 –1500 ml of urine per day. In tropics because of greater water loss through perspiration increased water intake is required to maintain urine volume. Normal intake of water ranges between 8 – 10 glasses per day.

Water is lost through feces, urine, lungs (expiration) skin (invisible perspiration and visible perspiration) amounting to about 2-3 liters per day. During infections and fever, the liquid intake should be increased as losses are higher. A moderate amount of water taken with or preceding a meal is an aid to digestion.

Dehydration results in extreme deficiency of water and fluids. Symptoms of dehydration are fatigue, headache, sullenness and in extreme cases, collapse.

The steps in the progression of dehydration are as follows. 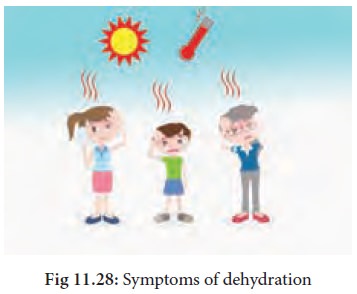 Excessive loss of water takes place due to vomiting, diarrohea, haemorrhage, excessive perspiration, exudating, burns, uncontrolled diabetes mellitus, fever and hot weather. It can be fatal and causes death in several children which can be easily avoided by proper fluid intake or oral rehydration therapy.

Oral rehydration therapy is a method of treating dehydration by making the patient drink solution which can be prepared by dissolving salt and sugar in boiled and cooled water. 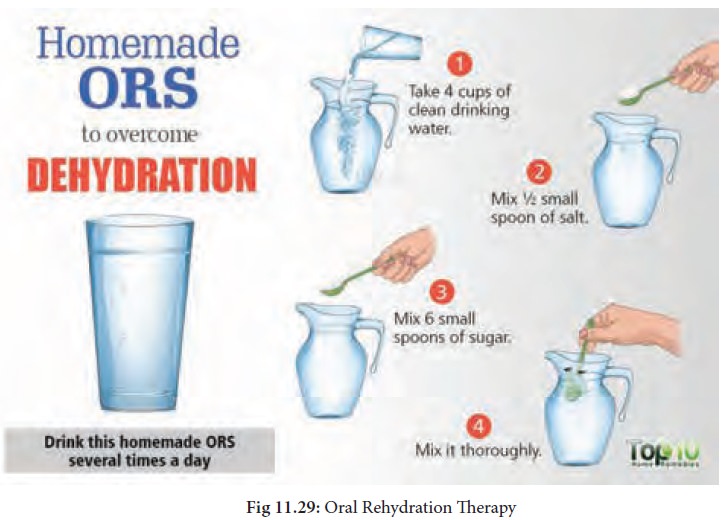 Water intoxication results due to excess intake of water. This results in an increase in the volume of intracellular fluid. This condition can lead to headache, nausea, vomiting, muscle twitching and convulsions. It can even be fatal.