Nutrition is a major factor in bringing out the maximum potential that one is endowed both physically and mentally.

Nutrition is a major factor in bringing out the maximum potential that one is endowed both physically and mentally. Widespread malnutrition is largely a result of dietary inadequacy and unhealthy lifestyles. The great advantages of looking at malnutrition as a problem in human ecology is that it allows for variety of approaches towards its prevention.

·         The nutrition components of ICDS aims to provide the following services:

·         assist in providing massive doses of vitamin A, ORS and iron tablets.

·         food supplementation to preschool children between the age of six months and six years, pregnant and lactating mothers and selected adolescent girls.

The Anganwadi workers are expected to survey all families in the community and identify all pregnant, lactating women and preschool children, monitor the growth of children and provide food supplement to the three groups for 300 days in a year. ICDS guidelines specify that monthly weighing of children should be done in the crucial 0-24 months age group. 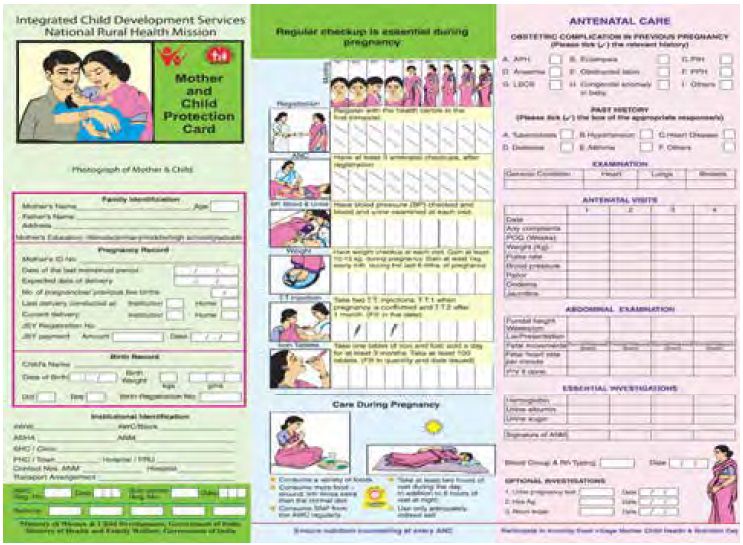 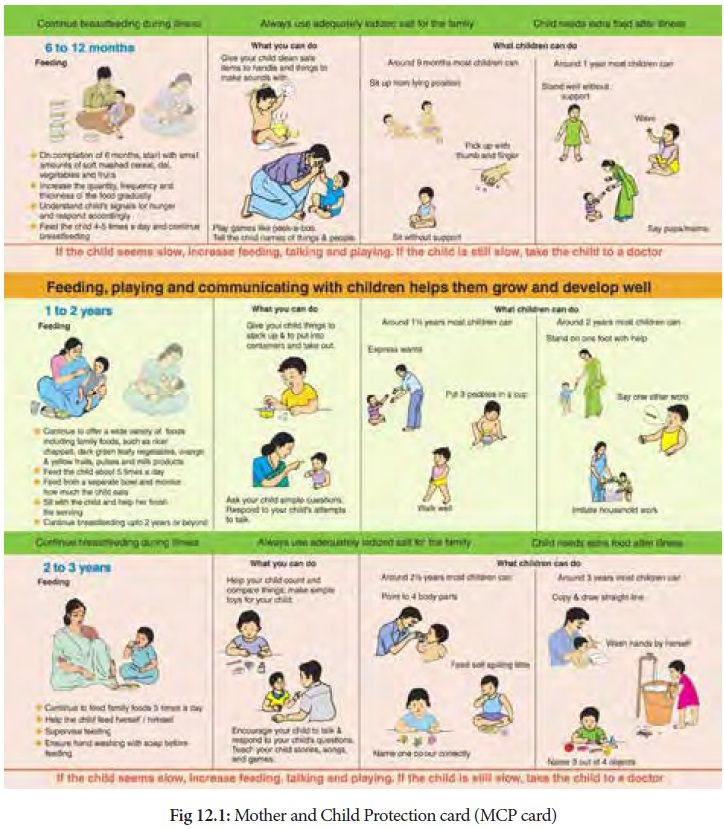 Mother and  Child Protection card (MCP card) was introduced for functionaries of National Rural Health Mission (NRHM) and ICDS from 1st April 2010 to progressively replace the earlier JacchhaBacchha card. The new MCP card is increasingly viewed as a critical tool for upkeeping maternal and child health in the updated coverage of both ICDS and NRHM.

The midday meal programme (MDMP) is also known as school lunch programme. This programme has been in operation since 1961 throughout the country. In formulating midday mealsforschoolchildren, thefollowing broad principles should be kept in mind:

·         The meal should be a supplement and not a substitute to the home diet.

·         The meal should supply atleast one third of the total energy requirement and half of the protein need.

·         meal should be such that it can  be prepared easily in schools. No complicated cooking process should be involved.

·         As far as possible, locally available foods should be used. This will reduce the cost of the meal.

·         meal should be frequently changed to avoid monotony.

Objectives of the school feeding programme are to:

·         provide food for undernourished children and to improve the nutritional status and monitor it.

The Mid-Day Meal Programme for school children comes under the Ministry of Human Development. The Government of India pays 40 percent of the expenditure and 60 percent is borne by the States. It covers all children upto the age of 15 years.

In Tamil Nadu, the noon meal programme was launched on July 1st 1982 by the then Chief Minister M.G.Ramachandran in rural areas and then extended to the urban areas. In this programme, students from classes I to V in Corporation, Government and Government aided schools are given free mid-day meal for 200 days in a year. Under this programme, the Government of India provides 100 grams of rice, 15 gram of dhal, 1 grams of oil and 20 paise worth of vegetables per indiviual. The meal given are based on a combination of cereals, pulses and leafy vegetables. Eggs are given thrice a week. Such a diet would increase the amount of vitamins and minerals and results in weight gain and clearance of deficiency symptoms.

What do children eat today in their midday meal :

·         Egg on all working days. Banana alternative for vegetarians.

·         First and third week of month, pulav made of black Bengal gram given for protein

Mid-Day meal programme has resulted in the following:

·         Reduction in severe malnutrition in children.

·         Developed attentiveness in them and thereby improved their power of comprehension.

·         Improved their performance in examinations.

·         Decreased the incidence of various diseases and physical disorders caused by starvation or intake of less nutritious food.

·         Enabled parents to attend to their routine bread earning tasks.

·         The gender difference in feeding the children reduced at home.

·         A favourable attitude in parents in educating the children, specifically female children.

Prevention and control of anaemia

Prevention of anaemia requires approaches that address all the potential causative factors. These include:

1. Dietary approach: The following points need to be considered for the promotion of this strategy:

·         Promotion of consumption of pulses, green leafy vegetables, other vegetables which are rich in iron and folic acid and meat products rich in iron particularly for pregnant and lactating mothers and preschool children. Media can also be involved for creation of awareness.

·         Creation of awareness in mothers attending antenatal clinics, immunization sessions, anganwadi centres and crèches about the prevalence of anaemia, ill effects of anaemia and that it is preventable.

·         Addition of iron rich foods to the weaning foods of infants.

·         Promotion of home gardening to increase the availability of common iron rich foods such as green leafy vegetables.

·         Discouraging the consumption of foods and beverages like tea and tamarind that inhibit iron absorption, immediately after food especially by the vulnerable groups like pregnant women and children.

·         Biweekly iron supplementation for preschool children of 6 months to 5 years.

·         Weekly supplementation for children from 1st to 5th grade in Government and Government aided schools.

·         Weekly supplementation for out of school children (5-10 years) at anganwadi centres. 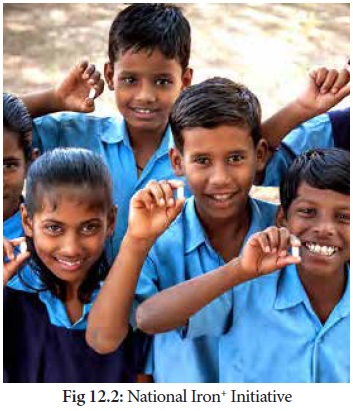 In addition to increased iron and folate intake, improvement in environmental sanitation and personal hygiene are also needed to control worm infestations and infections. Deworming done regularly would help in reducing the incidence of anaemia and improve the efficacy of iron supplements. An improvement in food intake results in improvement in haemoglobin levels

Prevention and control of vitamin A deficiency

2.      Dietary modification: The most rational and sustainable long term solution to control of vitamin A deficiency is to ensure that the community includes regularly, in their daily diets, foods rich in vitamin A or its precursor. 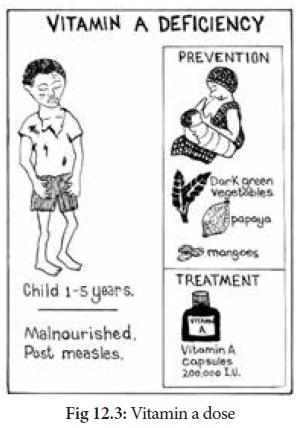 4.      Fortification of commonly and widely consumed foods with vitamin A: Fortification or enrichment of widely consumed foods with vitamin A is another strategy toprevent and control vitamin A deficiency. Foods which are consumed daily by all sections of the community with little variation in the intake are generally utilized for the fortification. Fortified foods are integrated into the conventional food system as value added products to reach a large segment of population.