The body contains about 24 minerals, all of which must be provided by the diet.

The body contains about 24 minerals, all of which must be provided by the diet. These are required by the body in very minute amounts and are often referred to as trace elements. The main important ones are iron, iodine, calcium, zinc and sodium.

Iron was first recognized as a constituent of the body by Lernery in 1713. It is now known that all the iron in the body exists in combination with protein molecules.

Overall the body contains 2.5g to 4.0g of iron. Most of the iron in the body is found in the blood, but some is present in every cell bound to iron containing enzymes. Iron is present in Haemoglobin which contains ferrous iron. It is essential for carrying oxygen to different tissues.

·         Iron is an important mineral needed for the formation of haemoglobin which is responsible for carrying oxygen from the lungs to different cells and tissues of the body in the form of oxyhaemoglobin. Thus iron helps in the oxidation process.

Haeme iron from animal foods is better absorbed than nonhaeme iron present in plant sources. Liver is the best source of iron. Iron is also absorbed well from red meat like lamb. Nonhaeme iron is present in cereals, millets, pulses and green leafy vegetables. Of the cereal grains, wheat and millets like bajra and ragi are very good source of iron. Inclusion in our daily diet about 50g of green leafy vegetables which are rich in iron can meet a fair proportion of iron needs. 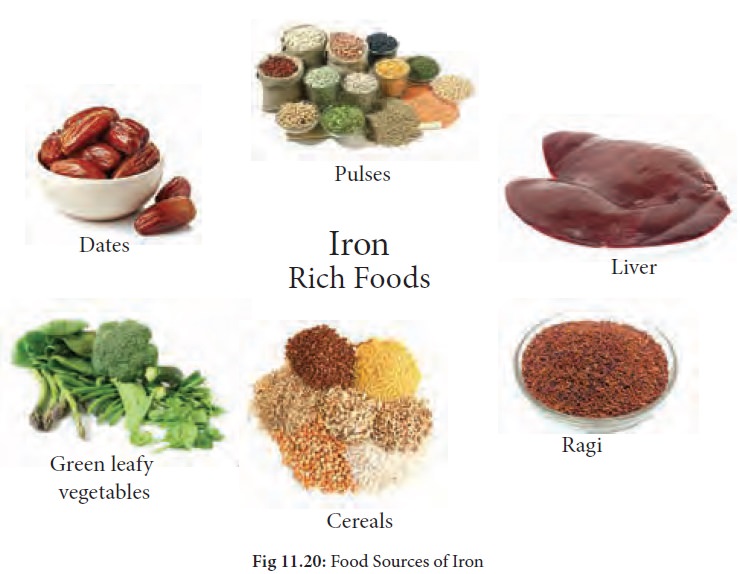 Iron deficiency leads to Anaemia which has the following symptoms:

·         Nails become brittle and become concave and appear like a spoon. 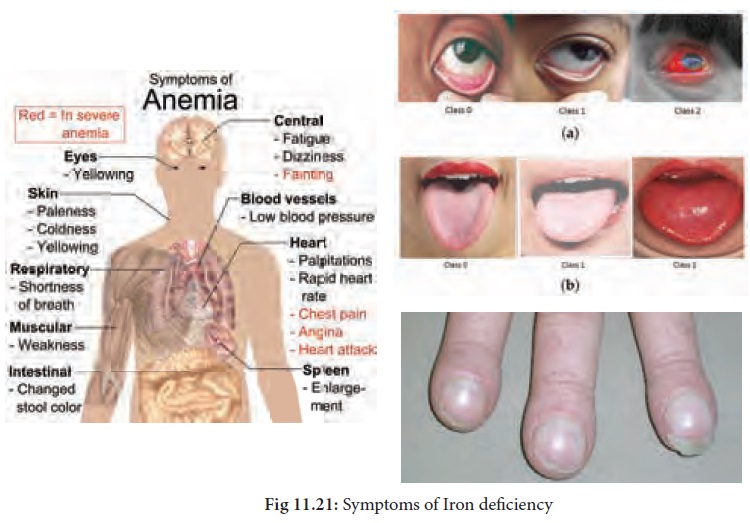 The significance of Iodine as an essential trace element lies in its role in thyroxine production. Iodine is a constituent of thyroxine, the active principle of the thyroid gland. The thyroid gland plays an important role in energy metabolism and in the growth of the body.

·         It is essential for the production of thyroid hormone called thyroxin which is secreted by the thyroid gland.

·         Thyroxin controls the basic metabolic rate in the body as it controls the metabolism of all nutrients.

·         Thyroxin regulates the rate of oxidation within the cells.

·         It regulates the functioning of nerve and muscle tissue.

Iodine is present only in small amounts in common foods, the quantity of iodine present depending on the iodine content of the soil. Iodised salt, sea salt, vegetables grown at sea shore, garlic, onion, cheese and sea fish are good sources of iodine. 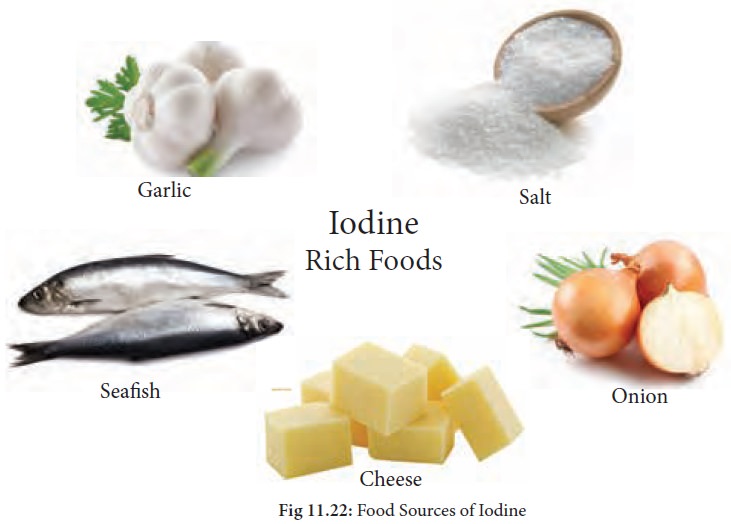 ·         Goitre: It is characterized by swelling of thyroid gland.

·         Cretinism: Person is deaf and has a shuffiing gait, retarded mental and physical growth, thus shorter in stature (dwarf).

Calcium is the major element in the body and an adult man of 60 kg has nearly one kilogram of calcium. Almost 99% of this calcium is found in the hard tissues of the body, namely the bones and teeth. Vitamin D is essential for the absorption of calcium. In vitamin D deficiency, calcium absorption is impaired.

·         It regulates the permeability of capillary walls.

·         It regulates the excitability of nerve fibres and nerve centres.

·         It acts as an activator for the enzymes present in the gastric juice.

·         It is essential for proper utilization of phosphorus and vitamins A, C and D 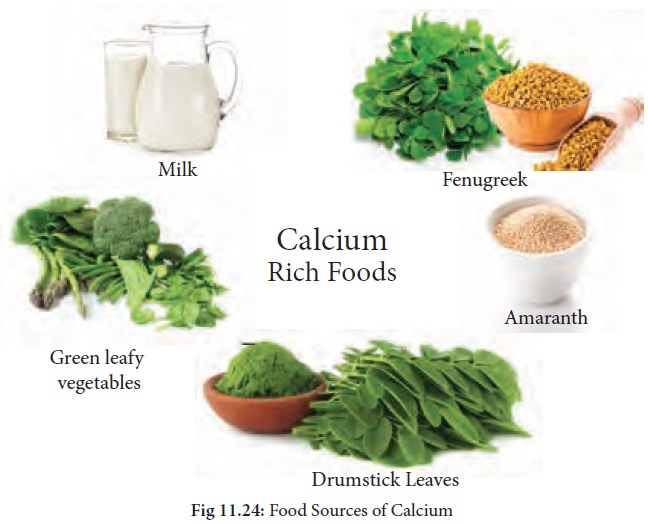 Zinc is an essential trace element which plays an important role in many enzymes of our body. Our body contains 2-3 grams of zinc. It has been found to be present in the hormone insulin. It plays an essential role in the formation of DNA and RNA. It aids in the healing of burns and wounds.

·         It plays a vital role in growth and cell division especially during pregnancy and prevents congenital abnormalities and premature delivery.

·         It plays an important role in maintaining fertility in males.

·         It is important for healthy vision and prevents night blindness and cataracts. 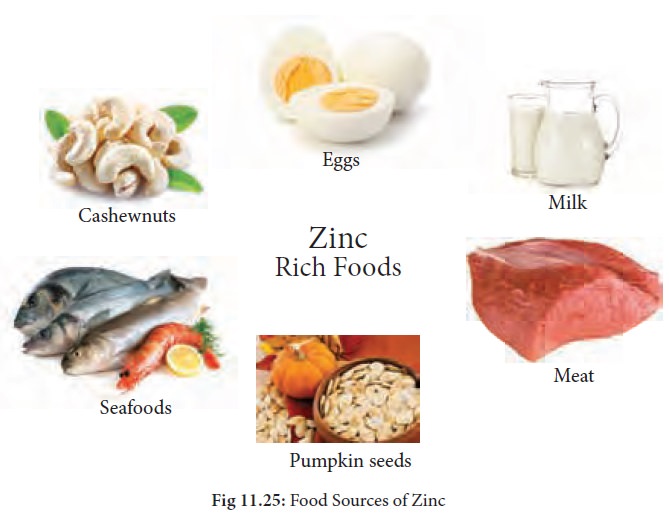 Sodium is a plentiful mineral in the body. It is essential in the recommended quantity for the body. The average adult contains approximately 100g of sodium. Sodium is easily absorbed in the small intestine. Sodium is lost in sweat during exercise or in hot environments. Sodium and chloride compound is table salt.

·         Sodium is the most abundant cation in the extracellular fluid of the body.

·         Itactswithotherelectrolytes,especially potassium, in the intracellular fluid to regulate the osmotic pressure and maintain proper water balance within the body.

·         It is the major factor in maintaining the acid-base equilibrium, in transmitting nerve impulses and in relaxing muscles. 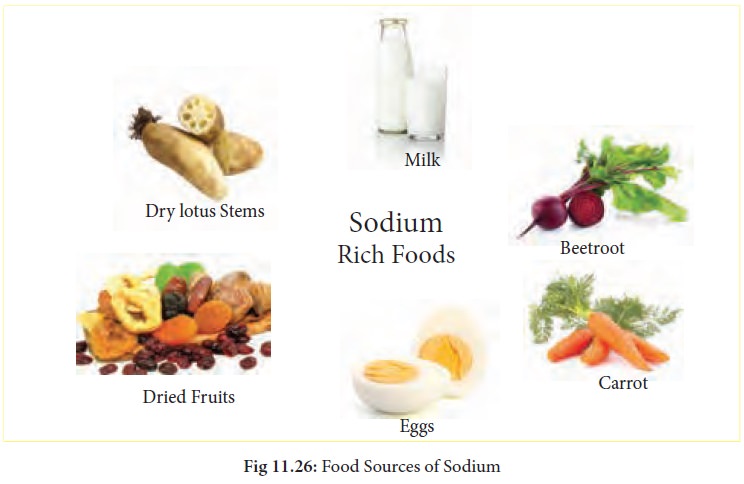 ·         Deficiency of sodium is caused by excessive sweating, prolonged use of diuretics, chronic diarrhoea.

·         Deficiency may lead to nausea, muscular weakness, heat exhaustion and mental apathy. Oversupply of sodium is a more common problem because of overuse of dietary sodium chloride or common salt.

·         Too much sodium may lead to water retention, high blood pressure and even stomach ulcers.