On 2 July 1776, the British under General. Howe attempted to regain what they had lost. Washington was forced to evacuate Long Island. The main American army managed to reach Pennsylvania.

On 2 July 1776, the British under General. Howe attempted to regain what they had lost. Washington was forced to evacuate Long Island. The main American army managed to reach Pennsylvania. While Howe waited in New York for the winter to pass, Washington made a daring attack on Christmas night at Trenton. The British forces were defeated in Princeton.

Meanwhile Americans were divided among themselves as Patriots and Loyalists. About two-thirds of the people who supported the war were Patriots. The Patriots fought for independence and the Loyalists supported the British. The Patriots were better organized than the loyalists. The American War of Independence was as much a civil war as a war with the British. According to an eyewitness, “Neighbour was against neighbour, father against son and son against father.”

In 1777 the British attempts at splitting the colonies into two by a campaign from the north failed. However, they managed to occupy Philadelphia. Washington’s efforts to take a town near Philadelphia were spoiled by Lord Cornwallis. But the British were defeated at Saratoga. This defeat paved the way for an alliance between France and the Americans. On 6 February 1778, France and America signed two treaties by which France recognized the United States of America and offered trade concessions. By June 1778 England and France were at war.

By the end of 1778 the theatre of war shifted to the south. In the Battle of Guilford Courthouse in March 1781 Cornwallis suffered heavy losses. He then marched towards Virginia. Finding not much support he took up a defensive position in Yorktown. Cornwallis was cut off from the sea by the French fleet. In September Washington attacked Yorktown, with a combined American and French troops. On 19 October 1781 Cornwallis surrendered. In 1783, the Peace of Paris was signed. Great Britain agreed to the independence of the United States. The military band played the tune ‘The World Turned Upside Down’ as British forces departed from Yorktown in 1781.

Cornwallis: Born into an aristocratic family and educated at Eton and Cambridge, Cornwallis joined the army in 1757. Upon his father’s death in 1762 he became Earl Cornwallis and entered the House of Lords, the upper house of Britain. His military action in the American War of Independence was praiseworthy, inflicting defeats on the American army in a few battles though finally he had to surrender his army at Yorktown. Despite this defeat, Cornwallis retained the confidence of successive British governments and continued to enjoy an active career. Knighted in 1786, he was appointed Governor General by the East India Company government in British India. 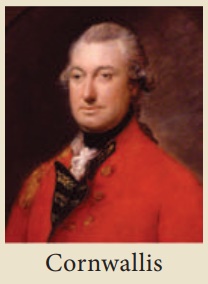