The immediate result of the war was America’s independence. For the first time a colonial power was overthrown by the colonised, leading to the establishment of a republican government in the United States.

The immediate result of the war was America’s independence. For the first time a colonial power was overthrown by the colonised, leading to the establishment of a republican government in the United States. The colonists wanted to get rid of the feudal inequalities of Europe and they succeeded. For many followers of the Enlightenment in Europe, the language of the Declaration of Independence seemed a living fulfillment of their ideals. The Declaration of Independence of 1776 stated that “all men are born equal.” But in reality the poor Black slaves did not fit in this. America had to fight a bitter civil war in the succeeding century, to abolish slavery.

By 1777 nearly all the colonies had a written constitution. These constitutions protected individual rights, freedom of press and freedom of religion. The Continental Congress had drafted the Articles of Confederation. The Church and the State were separated. Thomas Jefferson in his Virginia Statute for Religious Freedom introduced freedom of religion. It was later incorporated into the American Constitution.The conception of people’s right to a government of their choice encouraged the Latin American revolutionaries to strive for the overthrow of the Spanish empire in South America. Mirabeau quoted the Declaration of Independence with enthusiasm during the French

Revolution and the revolutionaries inspired by it were determined to fight against royal absolutism. The intellectuals of the time believed that the republican state was the only political structure in which individuals could preserve their basic freedom, including property and political rights.

Lafayette, who fought   the   British on      Washington’s side through to the conclusive battle at Yorktown in 1781, later during the French Revolution served the French National Guard as its Commander. 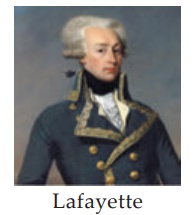 He penned the Declaration of the Rights of Man and the Citizen, with the help of Jefferson, which the National Assembly adopted on August 27, 1789.