Each colony had a Governor and the legislatures acted as a check on his powers. Thus, initially, there was no conflict between the British and American interests.

Each colony had a Governor and the legislatures acted as a check on his powers. Thus, initially, there was no conflict between the British and American interests. The English King and many big landowners in England had large financial interests in these colonies. The Seven Years War of 1756-63 between Britain and France had centred on the control of colonies, especially in North America. Britain defeated France and took control of Canada. But the war cost the English heavily. The British ministers proposed that the American colonists pay some of the cost of the war. So a series of taxes were imposed on the colonists. It should be noted that the Americans did not have representation in the British Parliament.

Even before the arrival of Europeans in America, there was an indigenous population, called Native Americans (they used to be referred to as ‘Red Indians’; it is now considered demeaning, and historians do not use this term any more), spread over the vast American continent. They belonged to various tribes and many of them were at war with each other. Besides they refused to work under conditions of slavery. Through a combination of violence and diplomacy Europeans conquered and defeated many of these tribes. Greatly reduced in numbers today they live in various reserves. 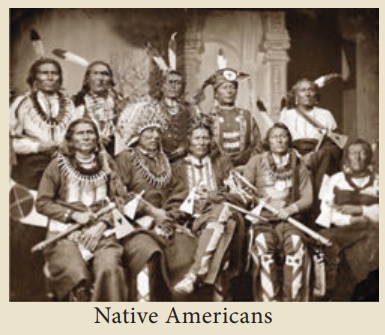 The Sugar Act of 1764 prohibited the import of foreign rum and imposed duties on molasses, wines, silks, coffee and other luxury items. As the Act was enforced ruthlessly, it led to protests by merchants in legislatures and town meetings. The preamble of the Sugar Act provided the slogan ‘No Taxation without representation’. Soon the Currency Act was passed that insisted on colonies repaying the debt only in gold or silver. It was a huge burden on the colonial economy. The Quartering Act of 1765 required the colonies to pay for the cost of keeping British troops in America. The Stamp Act (1765) required that many printed materials in the colonies be produced on stamped paper produced in London, carrying an embossed revenue stamp.