Course of the French Revolution

The critical moment came after the king shut out the commoners and the latter assembled in the Tennis-Court and took an oath that they would not disperse until they found a way out to their problems.

Course of the French Revolution

The Fall of Bastille

The critical moment came after the king shut out the commoners and the latter assembled in the Tennis-Court and took an oath that they would not disperse until they found a way out to their problems. The King tried to use force but his own soldiers refused to obey his orders. Louis then intrigued to get foreign regiments to shoot down his own people. This provoked the people to rise in revolt in Paris on 14 July 1789. They stormed the Bastille prison and set free all the prisoners. The fall of the Bastille was the first great turning point in the revolution. 14 July is celebrated as the National Day of France to this day. The subsequent popular risings all over the country emboldened the National Assembly to act swiftly. 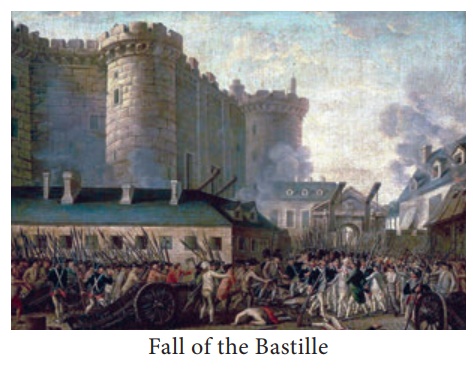 This Assembly comprised moderate liberals, who wanted a constitution on the model of England and America. Their leader was Mirabeau. The Assembly was controlled by the middle classes and there was no representation to the peasants and the common masses. This National Assembly abolished serfdom, feudal privileges, including exempting nobles and clergy from taxation, even titles, and feudal courts. The Assembly then passed a Declaration of the Rights of the Man and the Citizen.The idea was taken from the American Declaration of Independence. But the American declaration is short, while the French one is long. The Rights of Man include the rights which were supposed to ensure him equality and liberty and happiness. The Assembly brought about many other reforms. The vast property of the Church was confiscated by the State. A new division of France was made into eighty departments. The old feudal courts were replaced by better law-courts.

However, the crisis intensified in Paris due to the high price of bread. Riots broke out. The women of Paris marched to Versailles to demand bread from the King. The crowd was in an aggressive mood. The crowd demanded that bread be provided to them. The royal family, including the King, was mobbed. They forced the King and the royal family to go with them to Paris. 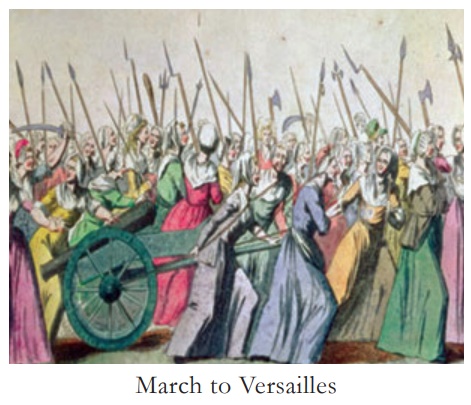 The King’s position was increasingly shaky. He was not able to reconcile to the legislations passed by the National Assembly. He decided to escape from Paris. Dressing himself  as  a  valet, he escaped along with his family to Varennes, a border town. However, he was recognized there by a postman, arrested by the National Guards and brought back to Paris. From then onwards, he remained in Paris virtually a prisoner.

There were many parties and groups fighting for control of power in the early days of the Revolution. There were the royalists still hoping to retain Louis XVI as an absolute king. The moderate liberals wanted to keep the King as a limited monarch. They called themselves the party of the Girondins. The hardcore republicans were the Jacobins. In foreign countries especially in England, there were the émigrés, the French nobles who had run away from the Revolution and were continually intriguing against it. All the kings and emperors of Europe, who were frightened by this mass upsurge were ranged against revolutionary France.

In September 1791, the National Assembly framed the first constitution. It provided for a Constitutional monarchy. The Legislature consisted of a single chamber of 750 members. The franchise was limited to those who owned a certain amount of property. The King continued to be the Executive head, but his powers were considerably limited. But the common people who had stormed the Bastille were disillusioned with the developments and found another outlet for their revolutionary energy. This was the Paris Commune. This Commune was in direct touch with the masses. The Commune became the rival of the National Assembly composed of the moderate middle class.

Emigres and the Revolutionary War

Many nobles who supported the monarchy fled France and lived in exile. They were known as Emigres (those who had emigrated). This included the brothers of the King. They lived in the frontier towns bordering France and were preparing for counter-revolutionary moves. In August 1791, Austria and Prussia together issued the Declaration of Pilnitz, pledging to restore monarchy in France. In April 1792, the Legislative Assembly which had succeeded the National Assembly declared war against Austria and Prussia. Foreign armies advanced into French territory and defeated the French troops. The King and his supporters were suspected of treachery. So the revolutionary Commune of Paris hoisted the Red Flag to signify the enforcement of martial law and in August 1792 ordered an attack on the King’s palace. Though the King ordered shooting by his Swiss guards, he was finally deposed and imprisoned. The people of Paris angered by the action of the Swiss guards in shooting and killing many of them hunted down the supporters of monarchy under their leader Marat. In three days, from September 2, about 1500 suspected dissidents were put in prison. After a trial, they were killed and this incident is called “September Massacres.” In       September        also occurred the first victory of the French troops over the invading Austrians and Prussians at the battle of Valmy. This saved the Revolution. On September 21, 1792 the National Convention met. 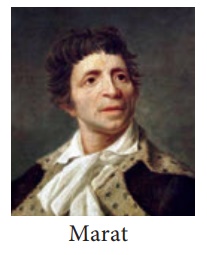 National Convention and the Reign of Terror, June 1793-July 1794

The first action of the National Convention was to  proclaim the formation of a republic. The trial of Louis XVI was taken up immediately and he was condemned to death. He was guillotined. From the very steps of the guillotine, Danton, a great leader of the Revolution, addressed the assembled crowds and threw an open challenge to other European kings. The new republic of France, through conscription, built up a strong army. The wars particularly against Austria, Prussia and later England engaged Republican France. As a consequence it was not possible to deal with local social problems. 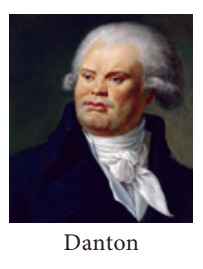 In order to depart totally from the ancient regime, the Convention created a new Republican calendar for France. All references to religion found in the old calendar’s name were deleted, and a 10-day week followed. In this secular calendar, the twelve months of the year were named after natural elements, while each day was named after a seed, tree, flower, fruit, animal, or tool, replacing the saints’-day names and Christian festivals. (The republican calendar was abandoned by Napoleon on 1 January 1806.) The existing system of measures was replaced by a metric system based on the kilogram and the metre.

In the meantime there was a struggle for power between the various groups, chiefly between the Girondins and the Jacobins. The Jacobins won and at the beginning of June 1793 most of the Girondins’ deputies were removed from the Convention. The Convention, dominated by the Jacobins, appointed two committees the Committees of Public Welfare and Public Safety and gave them wide powers. In September 1793 the Convention passed the Law of Suspects, which authorized the arrest of persons suspected of opposing the revolution. A month later twenty two Girondins’ deputies of the Convention were tried by the Revolutionary Tribunal and sentenced to death. Thus began the Reign of Terror’.

Danton, Herbert and Robespierre emerged as the main leaders of the National Convention. However, they were divided on many issues. Robespierre controlled the Committee of Public Safety and eliminated his rivals. There was a massive peasant revolt in the Vendee partly because of the unwillingness of the peasantry to accept conscriptions. The Vendee revolt was suppressed with great cruelty. There was a strong movement against Christianity. The proponents of this movement proposed the worship of Reason. There was great Festival of Liberty and Reason in Notre Dame Cathedral in Paris. But Robespierre was     conservative        in religious matters and neither he nor Danton approved of this movement. Herbert and his supporters who had organized the festival were sent to the guillotine. This caused the first split in the Jacobin party. 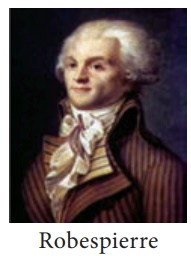 Danton and others protested against Robespierre for sending too many people to the guillotine. But they were also executed. Surrounded by enemies and totally alienated from the people, Robespierre and his clique chose to intensify the Terror.

The Law of Suspects made spreading of false news to  divide  or instigate the people a punishable crime. Under this Law, large groups of persons were tried together and sentenced. This Terror lasted for forty six days. On 27 July 1794, the Convention suddenly turned against Robespierre and his supporters.

The next day Robespierre was sent to the guillotine. 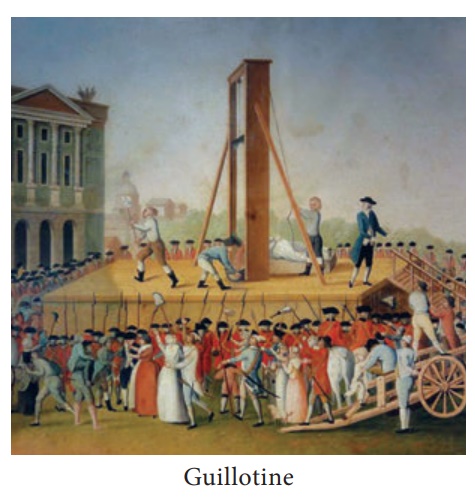 The Reign of Terror ended with the fall of Robespierre. Robespierre, the dictator of the Convention, though he was honest, patriotic and a person of integrity, earned notoriety by sending many of his colleagues to the guillotine. In October 1795 the Convention broke up and a Directory of five members assumed power. 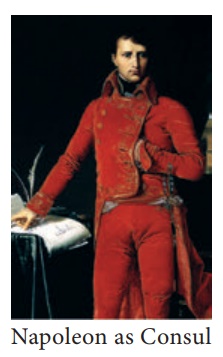 The Directory was  short  lived and was replaced by the Consulate with Napoleon as the first Consul. This Consulate was abolished by Napoleon Bonaparte, who later crowned himself as the Emperor  of France.

The Revolution thus failed, shattering the dreams of the idealists and the hopes of the poor. Yet the republican idea and principles of liberty, equality and fraternity continued to influence generations to come.