The French Revolution | History - Causes of the Outbreak | 9th Social Science : History: The Age of Revolutions

Causes of the Outbreak

Louis XV succeeded his great-grandfather Louis XIV and reigned for fifty nine years. He learnt no lesson that the king is not above law but bound by law from the English Revolution and the beheading of the King Charles I.

Causes of the Outbreak

Louis XV succeeded his great-grandfather Louis XIV and reigned for fifty nine years. He learnt no lesson that the king is not above law but bound by law from the English Revolution and the beheading of the King Charles I. In 1774 he was succeeded by his grandson Louis XVI. He was entirely under the influence of his wife Marie Antoinette, who believed, more than the King, in the Divine Right Theory of Kingship - the theory that the king was representative of god on earth and therefore for all his actions he was accountable only to god and not to anybody else. Both the King and the Queen were hated by the people.

On the eve of the French revolution France was going through a period of economic crisis. The French treasury was bankrupt because of its involvement in the Seven Years War that ended in defeat. French participation in the American War of Independence made the financial condition worse. The luxurious lifestyle of the royalty and nobles in Versailles court, in contrast to the grinding poverty of the common people, made the people accept the new ideologies of French philosophers of the eighteenth century. The Finance Ministers of the King, Turgot, Necker, Calonne and Brienne one after the other suggested reduction of royal expenditure and taxation of the first two Estates - the nobles and the clergy. Their advice was not only disregarded but they themselves were dismissed from service. To meet the resource crunch the government borrowed heavily resulting in a huge fiscal deficit. Nearly half the revenue went towards payment of interest for the loans. Under the circumstances, the French monarch Louis XVI was forced to convene the Estate General, the combined body of three estates comprising nobles, clergy and commoners respectively. 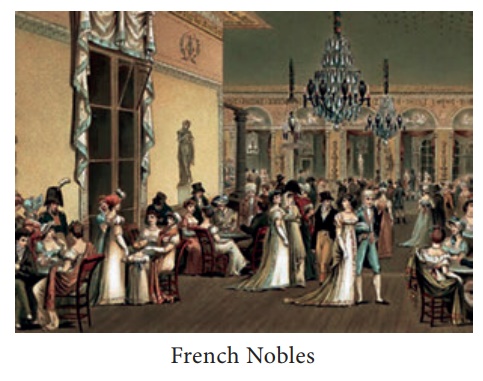 The condition of the already impoverished peasants worsened due to a series of bad harvests. It resulted in the rise of the price of bread. The peasants of the countryside and the labourers and artisans of the towns were the worst affected. There were hunger riots at the beginning of the reign of Louis XVI.

They were followed later by fresh peasant risings. A vast number of people had become professional beggars. It was officially declared in 1777 that there were eleven lakhs of beggars in France. The peasants were hungry not only for food, but were also hungry for land. They hated the nobles and the clergy because they enjoyed many privileges, notably exemption from taxation.

The clergy, despite being a minority, numbering only about 130,000, occupied a preeminent positionin France. They collected tithe (one tenth of the annual produce or earnings) from the common people. The nobility, also a minority, numbering about 110,000, was a landowning class enjoying feudal rights. They collected feudal dues from the peasants. Their land was tilled by the peasants. The farm produce of the peasants had to be processed in the mills of the feudal lord. The traditional hereditary nobles known as nobles of the sword enjoyed hunting rights. They were against the rising middle class (bourgeoisie) or a new class of nobility, the status that was conferred by the king for their services. These nobles were known as nobles of the robe.

The middle class and the peasants together formed the Third Estate. The bourgeoisie (the capitalist class) were the privileged few but the bulk of the Third Estate was constituted by the representatives of peasants. The peasants paid taxes to the state such as taille (land tax), gabelle (salt tax), etc., and provided free labour (corvee) for the construction of public roads. Burdened by the demands of the state, nobility and clergy, the peasants were in despair at the prospect of dying of starvation.

There were many notable thinkers and writers in France in the eighteenth century. The most famous writer of the time on rationalistic and scientific subjects was Voltaire (1694-1778). When imprisoned and banished, he had to live at Ferney near Geneva. Voltaire, Montesquieu (1689-1755) and Rousseau criticized the then existing conditions in France. Voltaire, was a prolific writer and activist, and was vehement in his criticism of the Church. His most famous work was Candide. His famous quote was: “those who can make you believe absurdities can make you commit atrocities.” He is said to have once exclaimed, “I disapprove of what you say, but I will defend to the death your right to say it.”

Another great writer, a contemporary of Voltaire, but younger than him, was Jean Jacques Rousseau (1712-78). His political theory set the minds of many afire with new ideas and new resolves. His ideas played an important part in preparing the people of France for the great revolution. He famously said in his book Social Contract, “Man is born free, but is everywhere in chains.” He argued that the laws are binding only when they are supported by the general will of the people.

Montesquieu (1689-1755), who wrote The Persian Letters and The Spirit of the Laws, also defended liberty. He put forward the theory of separation of powers: The liberty of the individual would be best protected only in a government where the powers of its three organs, viz., legislature, executive and judiciary were separate. It would put in place the necessary checks and balances to prevent any one organ from assuming more power to itself.

An Encyclopaedia also came out in Paris about this time and this was full of articles by Diderot and Jean d’Alembert. These philosophers and thinkers, opposed to religious intolerance and political and social privileges, succeeded in provoking large numbers of ordinary people to think and act. 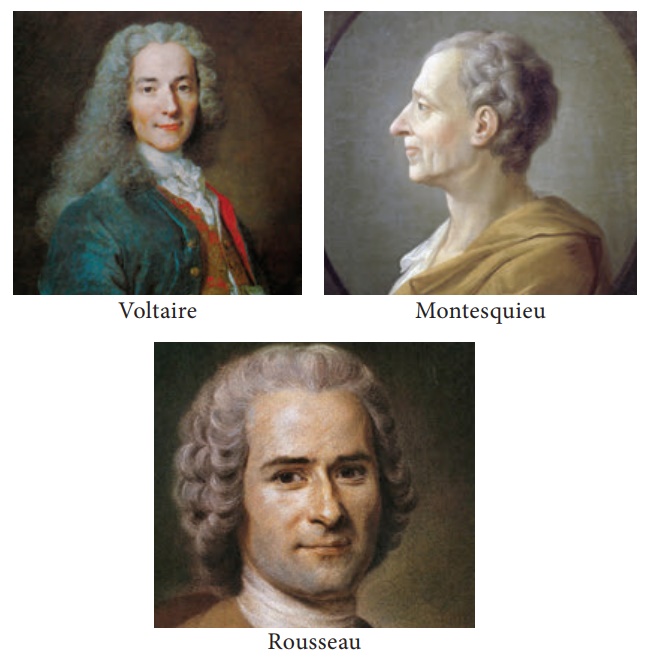