A virus cannot be completely invisible. Code must be stored somewhere, and the code must be in memory to execute. Moreover, the virus executes in a particular way, using certain methods to spread.

A virus cannot be completely invisible. Code must be stored somewhere, and the code must be in memory to execute. Moreover, the virus executes in a particular way, using certain methods to spread. Each of these characteristics yields a telltale pattern, called a signature, that can be found by a program that looks for it. The virus's signature is important for creating a program, called a virus scanner, that can detect and, in some cases, remove viruses. The scanner searches memory and long-term storage, monitoring execution and watching for the telltale signatures of viruses. For example, a scanner looking for signs of the Code Red worm can look for a pattern containing the following characters:

When the scanner recognizes a known virus's pattern, it can then block the virus, inform the user, and deactivate or remove the virus. However, a virus scanner is effective only if it has been kept up to date with the latest information on current viruses. Sidebar 3-5 describes how viruses were the primary security breach among companies surveyed in 2001.

Security firm Symantec reports that malicious code threats rose in 2005, as in previous years. In 2005, they found 21,858 new instances of viruses and worms, compared to 11,846 for 2004 [SYM06]. Curiously, the number of distinct families of malicious code decreased from 335 for 2004 to 274 for 2005, perhaps showing that malicious code writers are becoming more adept at modifying a base attack code type or that self-modifying malicious code is on the rise. E-mail is still the preferred medium of delivery, with 92 percent of attacks using that for delivery. Other popular methods were peer-to -peer sharing protocols at 14 percent and remote exploitation of a system or software vulnerability at 13 percent. (A single malicious code strain could use more than one propagation method, accounting for the sum of methods exceeding 100 percent.)

Most viruses attach to programs that are stored on media such as disks. The attached virus piece is invariant, so the start of the virus code becomes a detectable signature. The attached piece is always located at the same position relative to its attached file. For example, the virus might always be at the beginning, 400 bytes from the top, or at the bottom of the infected file. Most likely, the virus will be at the beginning of the file because the virus writer wants to obtain control of execution before the bona fide code of the infected program is in charge. In the simplest case, the virus code sits at the top of the program, and the entire virus does its malicious duty before the normal code is invoked. In other cases, the virus infection consists of only a handful of instructions that point or jump to other, more detailed instructions elsewhere. For example, the infected code may consist of condition testing and a jump or call to a separate virus module. In either case, the code to which control is transferred will also have a recognizable pattern. Both of these situations are shown in Figure 3-9. 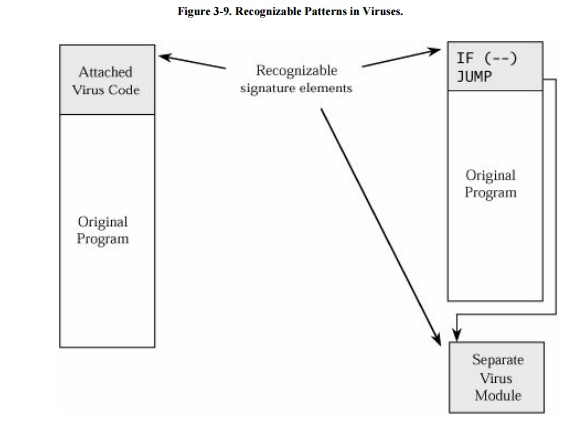 The virus scanner can use a code or checksum to detect changes to a file. It can also look for suspicious patterns, such as a JUMP instruction as the first instruction of a system program (in case the virus has positioned itself at the bottom of the file but is to be executed first, as in Figure 3-9).

A virus writer may want a virus to do several things at the same time, namely, spread infection, avoid detection, and cause harm. These goals are shown in Table 3-2, along with ways each goal can be addressed. Unfortunately, many of these behaviors are perfectly normal and might otherwise go undetected. For instance, one goal is modifying the file directory; many normal programs create files, delete files, and write to storage media. Thus, no key signals point to the presence of a virus. 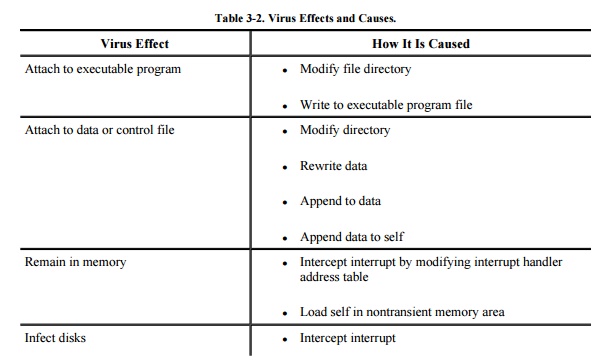 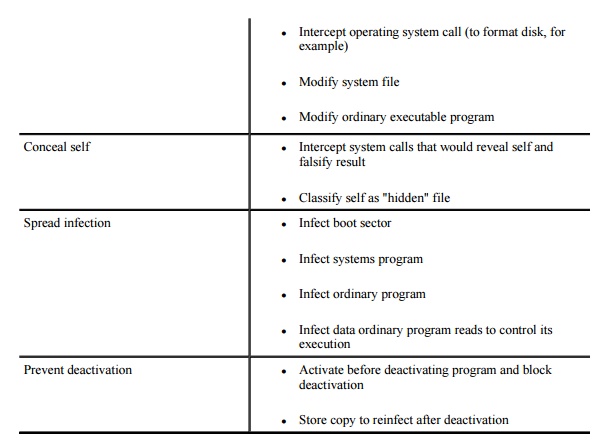 Most virus writers seek to avoid detection for themselves and their creations. Because a disk's boot sector is not visible to normal operations (for example, the contents of the boot sector do not show on a directory listing), many virus writers hide their code there. A resident virus can monitor disk accesses and fake the result of a disk operation that would show the virus hidden in a boot sector by showing the data that should have been in the boot sector (which the virus has moved elsewhere).

There are no limits to the harm a virus can cause. On the modest end, the virus might do nothing; some writers create viruses just to show they can do it. Or the virus can be relatively benign, displaying a message on the screen, sounding the buzzer, or playing music. From there, the problems can escalate. One virus can erase files, another an entire disk; one virus can prevent a computer from booting, and another can prevent writing to disk. The damage is bounded only by the creativity of the virus's author.

A virus is effective only if it has some means of transmission from one location to another. As we have already seen, viruses can travel during the boot process by attaching to an executable file or traveling within data files. The travel itself occurs during execution of an already infected program. Since a virus can execute any instructions a program can, virus travel is not confined to any single medium or execution pattern. For example, a virus can arrive on a disk or from a network connection, travel during its host's execution to a hard disk boot sector, reemerge next time the host computer is booted, and remain in memory to infect other disks as they are accessed.

The virus signature may be the most reliable way for a virus scanner to identify a virus. If a particular virus always begins with the string 47F0F00E08 (in hexadecimal) and has string 00113FFF located at word 12, it is unlikely that other programs or data files will have these exact characteristics. For longer signatures, the probability of a correct match increases.

If the virus scanner will always look for those strings, then the clever virus writer can cause something other than those strings to be in those positions. Many instructions cause no effect, such as adding 0 to a number, comparing a number to itself, or jumping to the next instruction. These instructions, sometimes called no-ops, can be sprinkled into a piece of code to distort any pattern. For example, the virus could have two alternative but equivalent beginning words; after being installed, the virus will choose one of the two words for its initial word. Then, a virus scanner would have to look for both patterns. A virus that can change its appearance is called a polymorphic virus. (Poly means "many" and morph means "form.")

A two -form polymorphic virus can be handled easily as two independent viruses. Therefore, the virus writer intent on preventing detection of the virus will want either a large or an unlimited number of forms so that the number of possible forms is too large for a virus scanner to search for. Simply embedding a random number or string at a fixed place in the executable version of a virus is not sufficient, because the signature of the virus is just the constant code excluding the random part. A polymorphic virus has to randomly reposition all parts of itself and randomly change all fixed data. Thus, instead of containing the fixed (and therefore searchable) string "HA! INFECTED BY A VIRUS," a polymorphic virus has to change even that pattern sometimes.

A simple variety of polymorphic virus uses encryption under various keys to make the stored form of the virus different. These are sometimes called encrypting viruses. This type of virus must contain three distinct parts: a decryption key, the (encrypted) object code of the virus, and the (unencrypted) object code of the decryption routine. For these viruses, the decryption routine itself, or a call to a decryption library routine, must be in the clear so that becomes the signature.