A trapdoor is an undocumented entry point to a module. Developers insert trapdoors during code development, perhaps to test the module, to provide "hooks" by which to connect future modifications or enhancements, or to allow access if the module should fail in the future.

A trapdoor is an undocumented entry point to a module. Developers insert trapdoors during code development, perhaps to test the module, to provide "hooks" by which to connect future modifications or enhancements, or to allow access if the module should fail in the future. In addition to these legitimate uses, trapdoors can allow a programmer access to a program once it is placed in production.

Because computing systems are complex structures, programmers usually develop and test systems in a methodical, organized, modular manner, taking advantage of the way the system is composed of modules or components. Often, programmers first test each small component of the system separate from the other components, in a step called unit testing, to ensure that the component works correctly by itself. Then, developers test components together during integration testing, to see how they function as they send messages and data from one to the other. Rather than paste all the components together in a "big bang" approach, the testers group logical clusters of a few components, and each cluster is tested in a way that allows testers to control and understand what might make a component or its interface fail. (For a more detailed look at testing, see Pfleeger and Atlee [PFL06a].)

To test a component on its own, the developer or tester cannot use the surrounding routines that prepare input or work with output. Instead, it is usually necessary to write "stubs" and "drivers," simple routines to inject data in and extract results from the component being tested. As testing continues, these stubs and drivers are discarded because they are replaced by the actual components whose functions they mimic. For example, the two modules MODA and MODB in Figure 3-10 are being tested with the driver MAIN and the stubs SORT, OUTPUT, and NEWLINE. 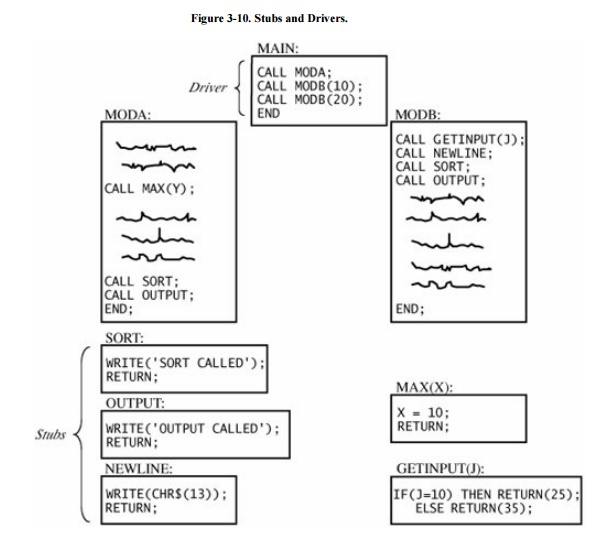 During both unit and integration testing, faults are usually discovered in components. Sometimes, when the source of a problem is not obvious, the developers insert debugging code in suspicious modules; the debugging code makes visible what is going on as the components execute and interact. Thus, the extra code may force components to display the intermediate results of a computation, to print the number of each step as it is executed, or to perform extra computations to check the validity of previous components.

To control stubs or invoke debugging code, the programmer embeds special control sequences in the component's design, specifically to support testing. For example, a component in a text formatting system might be designed to recognize commands such as .PAGE, .TITLE, and .SKIP. During testing, the programmer may have invoked the debugging code, using a command with a series of parameters of the form var = value. This command allows the programmer to modify the values of internal program variables during execution, either to test corrections to this component or to supply values passed to components this one calls.

Command insertion is a recognized testing practice. However, if left in place after testing, the extra commands can become a problem. They are undocumented control sequences that produce side effects and can be used as trapdoors. In fact, the Internet worm spread its infection by using just such a debugging trapdoor in an electronic mail program.

Poor error checking is another source of trapdoors. A good developer will design a system so that any data value is checked before it is used; the checking involves making sure the data type is correct as well as ensuring that the value is within acceptable bounds. But in some poorly designed systems, unacceptable input may not be caught and can be passed on for use in unanticipated ways. For example, a component's code may check for one of three expected sequences; finding none of the three, it should recognize an error. Suppose the developer uses a CASE statement to look for each of the three possibilities. A careless programmer may allow a failure simply to fall through the CASE without being flagged as an error. The fingerd flaw exploited by the Morris worm occurs exactly that way: A C library I/O routine fails to check whether characters are left in the input buffer before returning a pointer to a supposed next character.

As with viruses, trapdoors are not always bad. They can be very useful in finding security flaws. Auditors sometimes request trapdoors in production programs to insert fictitious but identifiable transactions into the system. Then, the auditors trace the flow of these transactions through the system. However, trapdoors must be documented, access to them should be strongly controlled, and they must be designed and used with full understanding of the potential consequences.

Developers usually remove trapdoors during program development, once their intended usefulness is spent. However, trapdoors can persist in production programs because the developers

·      intentionally leave them in the program for testing

·      intentionally leave them in the program for maintenance of the finished program, or

The first case is an unintentional security blunder, the next two are serious exposures of the system's security, and the fourth is the first step of an outright attack. It is important to remember that the fault is not with the trapdoor itself, which can be a useful technique for program testing, correction, and maintenance. Rather, the fault is with the system development process, which does not ensure that the trapdoor is "closed" when it is no longer needed. That is, the trapdoor becomes a vulnerability if no one notices it or acts to prevent or control its use in vulnerable situations.

In general, trapdoors are a vulnerability when they expose the system to modification during execution. They can be exploited by the original developers or used by anyone who discovers the trapdoor by accident or through exhaustive trials. A system is not secure when someone believes that no one else would find the hole.