The virus writer may find these qualities appealing in a virus: · It is hard to detect. · It is not easily destroyed or deactivated. · It spreads infection widely. · It can reinfect its home program or other programs. · It is easy to create. · It is machine independent and operating system independent.

The virus writer may find these qualities appealing in a virus:

·      It is not easily destroyed or deactivated.

·      It can reinfect its home program or other programs.

Few viruses meet all these criteria. The virus writer chooses from these objectives when deciding what the virus will do and where it will reside.

Just a few years ago, the challenge for the virus writer was to write code that would be executed repeatedly so that the virus could multiply. Now, however, one execution is enough to ensure widespread distribution. Many viruses are transmitted by e-mail, using either of two routes. In the first case, some virus writers generate a new e-mail message to all addresses in the victim's address book. These new messages contain a copy of the virus so that it propagates widely. Often the message is a brief, chatty, nonspecific message that would encourage the new recipient to open the attachment from a friend (the first recipient). For example, the subject line or message body may read "I thought you might enjoy this picture from our vacation." In the second case, the virus writer can leave the infected file for the victim to forward unknowingly. If the virus's effect is not immediately obvious, the victim may pass the infected file unwittingly to other victims.

Let us look more closely at the issue of viral residence.

The majority of viruses today execute only once, spreading their infection and causing their effect in that one execution. A virus often arrives as an e-mail attachment of a document virus. It is executed just by being opened.

A special case of virus attachment, but formerly a fairly popular one, is the so-called boot sector virus. When a computer is started, control begins with firmware that determines which hardware components are present, tests them, and transfers control to an operating system. A given hardware platform can run many different operating systems, so the operating system is not coded in firmware but is instead invoked dynamically, perhaps even by a user's choice, after the hardware test.

To allow for change, expansion, and uncertainty, hardware designers reserve a large amount of space for the bootstrap load. The boot sector on a PC is slightly less than 512 bytes, but since the loader will be larger than that, the hardware designers support "chaining," in which each block of the bootstrap is chained to (contains the disk location of) the next block. This chaining allows big bootstraps but also simplifies the installation of a virus. The virus writer simply breaks the chain at any point, inserts a pointer to the virus code to be executed, and reconnects the chain after the virus has been installed. This situation is shown in Figure 3-8. 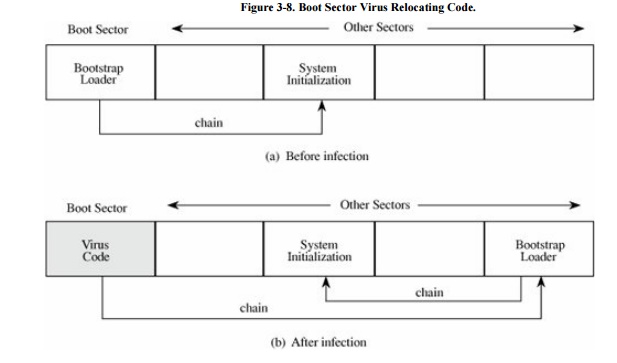 The boot sector is an especially appealing place to house a virus. The virus gains control very early in the boot process, before most detection tools are active, so that it can avoid, or at least complicate, detection. The files in the boot area are crucial parts of the operating system. Consequently, to keep users from accidentally modifying or deleting them with disastrous results, the operating system makes them "invisible" by not showing them as part of a normal listing of stored files, preventing their deletion. Thus, the virus code is not readily noticed by users.

Some parts of the operating system and most user programs execute, terminate, and disappear, with their space in memory being available for anything executed later. For very frequently used parts of the operating system and for a few specialized user programs, it would take too long to reload the program each time it was needed. Such code remains in memory and is called "resident" code. Examples of resident code are the routine that interprets keys pressed on the keyboard, the code that handles error conditions that arise during a program's execution, or a program that acts like an alarm clock, sounding a signal at a time the user determines. Resident routines are sometimes called TSRs or "terminate and stay resident" routines.

A virus can also modify the operating system's table of programs to run. On a Windows machine the registry is the table of all critical system information, including programs to run at startup. If the virus gains control once, it can insert a registry entry so that it will be reinvoked each time the system restarts. In this way, even if the user notices and deletes the executing copy of the virus from memory, the virus will return on the next system restart.

Other Homes for Viruses

A virus that does not take up residence in one of these cozy establishments has to fend more for itself. But that is not to say that the virus will go homeless.

One popular home for a virus is an application program. Many applications, such as word processors and spreadsheets, have a "macro" feature, by which a user can record a series of commands and repeat them with one invocation. Such programs also provide a "startup macro" that is executed every time the application is executed. A virus writer can create a virus macro that adds itself to the startup directives for the application. It also then embeds a copy of itself in data files so that the infection spreads to anyone receiving one or more of those files.

Libraries are also excellent places for malicious code to reside. Because libraries are used by many programs, the code in them will have a broad effect. Additionally, libraries are often shared among users and transmitted from one user to another, a practice that spreads the infection. Finally, executing code in a library can pass on the viral infection to other transmission media. Compilers, loaders, linkers, runtime monitors, runtime debuggers, and even virus control programs are good candidates for hosting viruses because they are widely shared.