A printed copy of a virus does nothing and threatens no one. Even executable virus code sitting on a disk does nothing.

A printed copy of a virus does nothing and threatens no one. Even executable virus code sitting on a disk does nothing. What triggers a virus to start replicating? For a virus to do its malicious work and spread itself, it must be activated by being executed. Fortunately for virus writers but unfortunately for the rest of us, there are many ways to ensure that programs will be executed on a running computer.

For example, recall the SETUP program that you initiate on your computer. It may call dozens or hundreds of other programs, some on the distribution medium, some already residing on the computer, some in memory. If any one of these programs contains a virus, the virus code could be activated. Let us see how. Suppose the virus code were in a program on the distribution medium, such as a CD; when executed, the virus could install itself on a permanent storage medium (typically, a hard disk) and also in any and all executing programs in memory. Human intervention is necessary to start the process; a human being puts the virus on the distribution medium, and perhaps another initiates the execution of the program to which the virus is attached. (It is possible for execution to occur without human intervention, though, such as when execution is triggered by a date or the passage of a certain amount of time.) After that, no human intervention is needed; the virus can spread by itself.

A more common means of virus activation is as an attachment to an e-mail message. In this attack, the virus writer tries to convince the victim (the recipient of the e-mail message) to open the attachment. Once the viral attachment is opened, the activated virus can do its work. Some modern e-mail handlers, in a drive to "help" the receiver (victim), automatically open attachments as soon as the receiver opens the body of the e-mail message. The virus can be executable code embedded in an executable attachment, but other types of files are equally dangerous. For example, objects such as graphics or photo images can contain code to be executed by an editor, so they can be transmission agents for viruses. In general, it is safer to force users to open files on their own rather than automatically; it is a bad idea for programs to perform potentially security-relevant actions without a user's consent. However, ease-of-use often trumps security, so programs such as browsers, e-mail handlers, and viewers often "helpfully" open files without asking the user first.

A program virus attaches itself to a program; then, whenever the program is run, the virus is activated. This kind of attachment is usually easy to program. 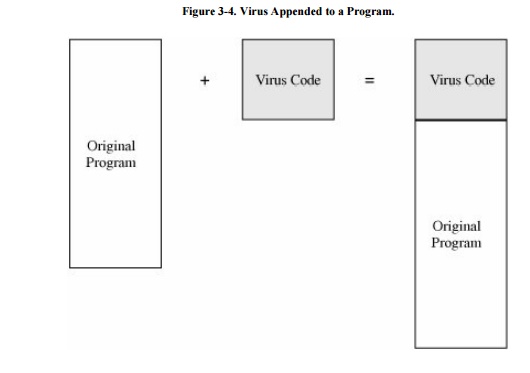 This kind of attachment is simple and usually effective. The virus writer does not need to know anything about the program to which the virus will attach, and often the attached program simply serves as a carrier for the virus. The virus performs its task and then transfers to the original program. Typically, the user is unaware of the effect of the virus if the original program still does all that it used to. Most viruses attach in this manner.

Viruses That Surround a Program

An alternative to the attachment is a virus that runs the original program but has control before and after its execution. For example, a virus writer might want to prevent the virus from being detected. If the virus is stored on disk, its presence will be given away by its file name, or its size will affect the amount of space used on the disk. The virus writer might arrange for the virus to attach itself to the program that constructs the listing of files on the disk. If the virus regains control after the listing program has generated the listing but before the listing is displayed or printed, the virus could eliminate its entry from the listing and falsify space counts so that it appears not to exist. A surrounding virus is shown in Figure 3-5. 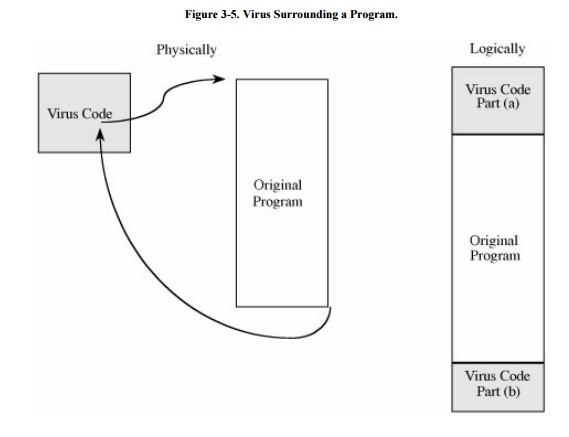 A third situation occurs when the virus replaces some of its target, integrating itself into the original code of the target. Such a situation is shown in Figure 3-6. Clearly, the virus writer has to know the exact structure of the original program to know where to insert which pieces of the virus. 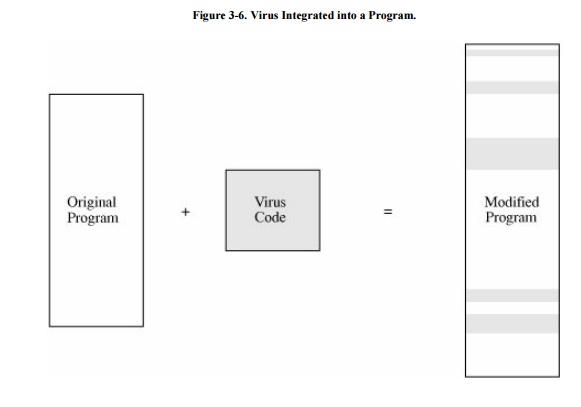 Currently, the most popular virus type is what we call the document virus, which is implemented within a formatted document, such as a written document, a database, a slide presentation, a picture, or a spreadsheet. These documents are highly structured files that contain both data (words or numbers) and commands (such as formulas, formatting controls, links). The commands are part of a rich programming language, including macros, variables and procedures, file accesses, and even system calls. The writer of a document virus uses any of the features of the programming language to perform malicious actions.