Viruses are responsible for causing some of the most serious infectious diseases to affect humans. Some important examples are listed in Table 10.3, and some are discussed in a little more detail below.

Viruses are responsible for causing some of the most serious infectious diseases to affect humans. Some important examples are listed in Table 10.3, and some are discussed in a little more detail below. 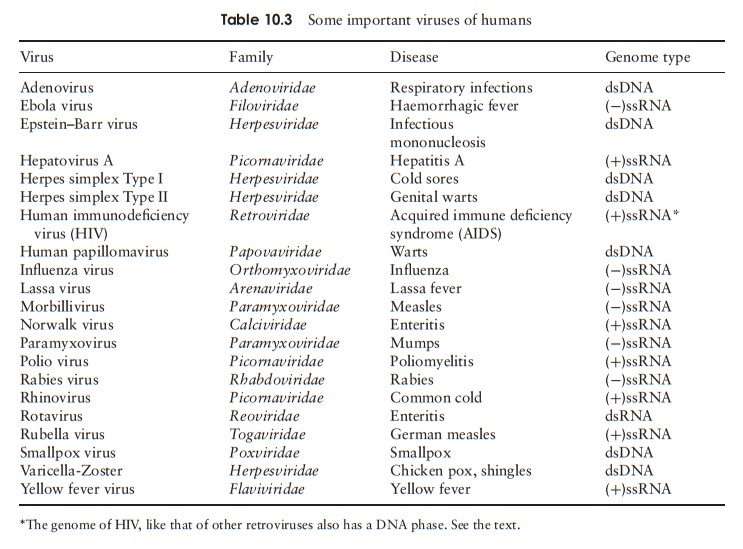 Influenza is a disease of the respiratory tract caused by members of the Orthomyx-oviridae. Transmission occurs as a result of inhaling airborne respiratory droplets froman infected individual. Infection by the influenza virus results in the destruction of epithelial cells of the respiratory tract, leaving the host open to secondary infections from bacteria such as Haemophilus influenzae and Staphylococcus aureus. It is these secondary infections that are responsible for the great majority of fatalities caused by influenza. Generally, sufferers from influenza recover completely within 10–14 days, but some people, notably the elderly and those with chronic health problems, may develop complications such as pneumonia.

The influenza virus has an envelope, and a segmented (−) sense ssRNA genome (Figure 10.19). The envelope contains two types of protein spike, each of which plays a crucial role in the virus’s infectivity:

·              Neuraminidase is an enzyme which hydrolyses sialic acid, thereby assisting in the release of viral particles.

·              Haemagglutinin enables the virus to attach to host cells by binding to epithelial sialic acid residues. It also helps in the fusion of the viral envelope with the cell membrane.

Both types of spike act as antigens, proteins that stimulate the production of antibodies in a host. One of the reasons that influenza is such a successful virus is that the ‘N’ and ‘H’ antigens are prone to undergoing changes (antigenic shift) so that the antigenic ‘signature’ of the virus becomes altered, and host immunity is evaded. Different strains of the influenza virus are given a code denoting which variants of the antigens they carry; the strain that caused the 1918 pandemic, for example, was N1H1, while the one responsible for the outbreak of ‘bird flu’ in SE Asia in 2003/4 was H5N1.

Everybody must surely be familiar with the symptoms of gastroenteritis – sickness, diarrhoea, headaches and fever. The cause of this gastroenteritis may be bacterial (e.g.Salmonella) or viral. The major cause of the vi-ral form is the human rotavirus , which, together with the Norwalk virus, is responsible for the majority of re-ported cases. The rotavirus has a segmented, dsRNA genome, and is a non-enveloped virus.

The virus damages the villi in the upper part of the intestinal tract, affecting normal ion transport, and resulting in the characteristic water loss. Transmission of gastroen-teritis is via the faecal–oral route, that is, by the ingestion of faecally contaminated food or water. Poor hygiene practice or contaminated water supplies are usually to blame for the perpetuation of the cycle. Normally, the condition is self-limiting, lasting only a couple of days; the normal treatment is fluid replacement therapy. In areas where clean water supplies are not available, however, the outcome can be much more serious. In the Third World, the condition is a major killer; it is the principal cause of infant mortality, and the cause of some five to ten million deaths per year.

After an infection has passed, a virus may sometimes remain in the body for long periods, causing no harm. It may be reactivated, however, by stress or some change in the individual’s health, and initiate a disease state. Well known examples of latent viral infections are cold sores and shingles, both caused by members of the herpesvirus family. A virus of this sort will remain with an individual throughout their lifetime.Whereas latent virus infections are characterised by a sudden increase in virus pro-duction, in persistent (slow) infections the increase is more gradual, building up ove rseveral years. Such infections have a serious effect on the target cells, and are generally fatal. An example is the measles virus, which can re-manifest itself after many years in a rare condition called subacute sclerosing panencephalitis.

A number of chemical and physical agents are known to trigger the uncontrolled prolif-eration of cells that characterise cancers, but in the last two decades it has become clear that at least six types of human cancer can be virally induced. How do cells lose control of their division, and how are viruses able to bring this about? It is now known that cells contain genes called protooncogenes, involved in normal cell replication. They are normally under the control of other, tumour-suppressor genes, but these can be blocked by proteins encoded by certain DNA viruses. When this happens, the protooncogene functions as an oncogene, and cell division is allowed to proceed uncontrolled. Retro-viruses have a different mechanism; they carry their own, altered, version of the cellularoncogene,  which  becomes  integrated  into  the  host’sgenome and leads to uncontrolled cell growth. Retro-virus oncogenes are thought to have been acquired orig-inally from human (or animal) genomes, with the RNA transcript becoming incorporated into the retrovirus particle.

As a result of changes in the pathogen or in the host pop-ulation, completely new infectious diseases may arise, or we may experience the reappearance of diseases previ-ously considered to be under control. These are known as, respectively, emerging and re-emerging infections. Changed patterns of human population movement are often responsible for the development of such infections, with the spread of smallpox to the New World by European colonisers being a famous example. Frequently emerging virus infections are zoonotic in origin, that is, they are transferred to humans from animal reservoirs. HIV, for example, is thought to have developed from a similar virus found in monkeys.

While this book was in preparation, there was a sharp reminder of the ever-present threat of emerging viral diseases, in the form of a new viral disease called severe acute res-piratory syndrome (SARS). The outbreak of this disease began in Guangdong province in southern China in November 2002. The Chinese authorities were heavily criticised for not reporting the extent of the outbreak until some 3 months later, by which time cases were appearing in many parts of the world, illustrating the role of increased inter-continental travel in the spread of such a disease. At its peak in April 2003, over 1000 new cases of SARS were being reported per week. The cause of SARS was quickly iden-tified as a member of the Coronaviridae (single-stranded RNA viruses). Transmittedby droplets from coughs and sneezes, it produces flu-like symptoms, but has a mor-tality rate of around 4 percent. Strict public health measures were brought into force, including restrictions in flights to and from affected areas, and the number of reported cases began to subside. In July 2003, the World Health Organisation announced that the final country, Taiwan, had been removed from its list of SARS-infected countries. By this time, SARS had claimed over 800 lives, mostly in China and Hong Kong, but with a number of deaths occurring as far afield as Canada and South Africa. Although apparently under control, isolated cases of SARS infections emerged in late 2003, and early 2004, most of which could be linked to laboratory workers. In January 2004 the Chinese authorities announced that a SARS vaccine was about to enter human clinical trials.

Smallpox, once the scourge of millions, was in 1979 the first infectious disease to be declared successfully eradicated. This followed a worldwide campaign of vaccination by the World Health Organisation over the previous decade, and was made feasible by the fact that humans are the only reservoir for the virus. Vaccination is a preventative strategy that aims to stimulate the host immune system, by exposing it to the infectious agent in question in an inactivated or incomplete form. There are four main classes of virus vaccines:

Attenuated (=‘weakened’) vaccines contain ‘live’ viruses, but ones whose pathogenic-ity has been greatly reduced. The aim is to mimic an infection in order to stimulate an immune response, but without bringing about the disease itself. A famous example of this type of vaccine is the polio vaccine developed by Albert Sabin in the 1960s. The cowpox virus used by Edward Jenner in his pioneering vaccination work in the late 18th century was a naturally occurring attenuated version of the smallpox virus.

Inactivated vaccines contain viruses which have been exposed to a denaturing agentsuch as formalin. This has the effect of rendering them non-infectious, while at the same time retaining their ability to stimulate an immune response. Vaccines directed against influenza are of this type.

Subunit vaccines depend on the stimulation of an immune response by just a part ofthe virus. Since the complete virus is not introduced, there is no chance of infection, so vaccines of this type have the attraction of being very safe. Subunit vaccines are often made using recombinant DNA technology; the first example to be approved for human use was the hepatitis B vaccine, which consists of part of the protein coat of the virus produced in specially engineered yeast cells.

DNA vaccines are also the product of modern molecular biology techniques. DNAcoding for virus antigens is directly injected into the host, where it is expressed and triggers a response by the immune system. Vaccines of this type have not so far been approved for use in humans.