The phage and animal virus growth cycles we have described so far have all involved double-stranded DNA genomes.

The phage and animal virus growth cycles we have described so far have all involved double-stranded DNA genomes. As you will remember,  many viruses contain RNA instead of DNA as their genetic material, and we now need to consider briefly how these viruses complete their replication cycles.

Replication of RNA viruses occurs in the cytoplasm of the host; depending on whether the RNA is single- or double-stranded, and (+) or (−) sense, the details differ. The genome of a (+) sense single stranded RNA virus functions directly as an mRNA molecule, producing a giantpolyprotein, which is then cleaved into the various struc-tural and functional proteins of the virus. In order for the (+) sense RNA to be replicated, a complementary (−) sense strand must be made, which acts as a template for the pro-duction of more (+) sense RNA (Figure 10.14). The RNA of a (−) sense RNA virus must first act as a template for the formation of its complementary sequence by a virally encoded RNA polymerase. The (+) sense RNA so formed has two functions: (i) to act 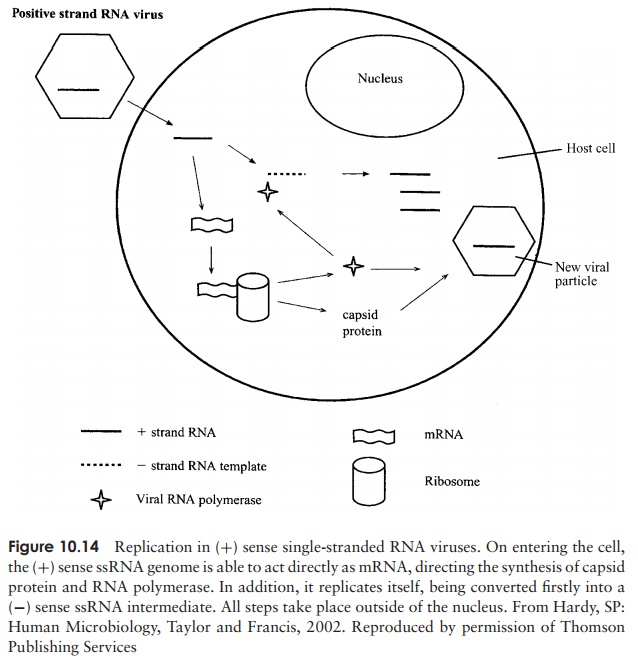 as mRNA and undergo translation into the virus’s various proteins, and (ii) to act as template for the production of more genomic (−) sense RNA (Figure 10.15).

Double-stranded RNA viruses are all segmented. They form separate mRNAs foreach of their proteins by transcription of the (−) strand of their genome. These are each translated, and later form an aggregate (subviral particle) with specific proteins, where they act as templates for the synthesis of a double-stranded RNA genome, ready for incorporation into a new viral particle. 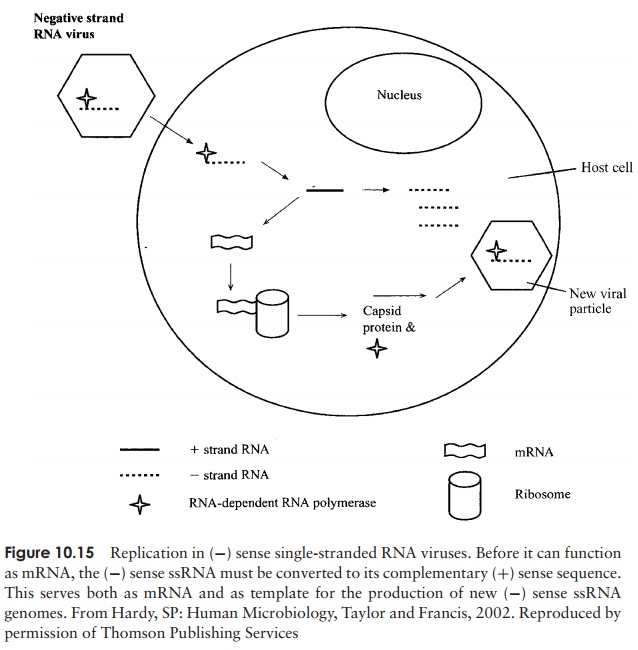 These viruses, which include some important human pathogens, have a genome that exists as RNA and DNA at different part of their replication cycle. Retroviruses have a (+) sense ss-RNA genome which is unique among viruses in being diploid. The two copies of the genome serve as templates for the enzyme reverse transcriptase to produce 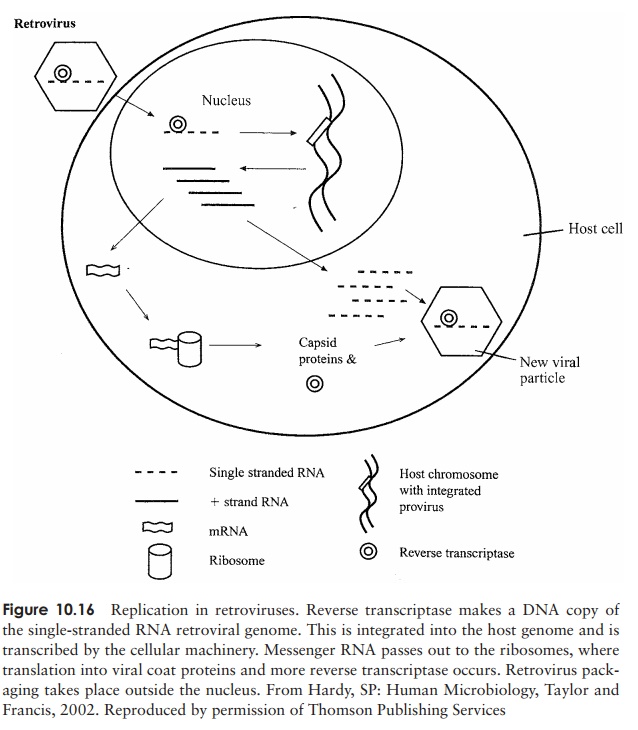 a complementary strand of DNA. The RNA component of this hybrid is then degraded, allowing the synthesis of a second strand of DNA. This proviral DNA passes to the nucleus, where it is incorporated into the host’s genome (Figure 10.16). Transcription by means of a host RNA polymerase results in mRNA, which is translated into viral proteins and also serves as genomic material for the new retrovirus particles. The human immunod-eficiency virus (HIV), the causative agent of acquired immune deficiency syndrome, is an important example of a retrovirus.

In two families of viruses (hepadnaviruses and caulimoviruses), DNA and RNA phases again alternate, but their order of appearance is reversed, so that a dsDNA genome is produced. This is made possible by reverse transcriptase occurring at a later stage, during the maturation of the virus particle.