Viruses that infect bacterial cells are called bacteriophages (phages for short), which means, literally, ‘bacteria eaters’. Perhaps the best understood of all viral replication cycles are those of a class of bacteriophages which infect E. coli, known as the T-evenphages. These are large, complex viruses, with a characteristic head and tail structure(Figure 10.8). The double-stranded, linear DNA genome contains over 100 genes, and is contained within the icosahedral head. The growth cycle is said to be lytic, because itculminates in the lysis (=bursting) of the host cell. Figure 10.9 shows the lytic cycle of phage T4, and the main stages are described below. 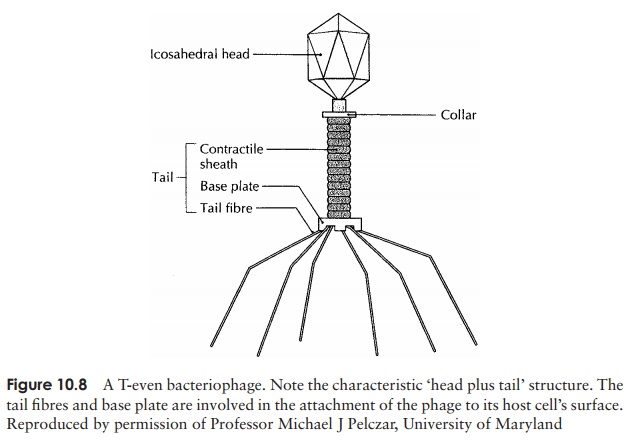 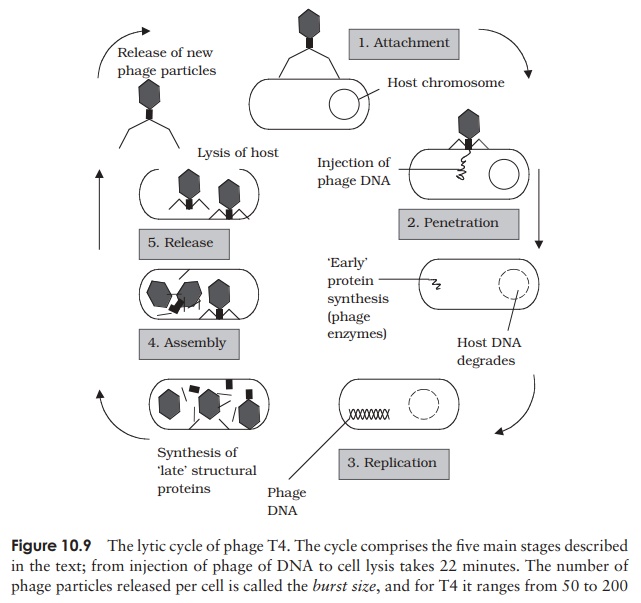 1. Adsorption (attachment): T4 attaches by means ofspecific tail fibre proteins to complementary recep-tors on the host cell’s surface. The nature of these receptors is one of the main factors in determining a virus’s host specificity.

2. Penetration: The enzyme lysozyme, present in thetail of the phage, weakens the cell wall at the point of attachment, and a contraction of the tail sheath of the phage causes the core to be pushed down into the cell, releasing the viral DNA into the in-terior of the bacterium. The capsid remains en-tirely outside the cell, as elegantly demonstrated in the famous experiment by Hershey and Chase.

3. Replication: Phage genes cause host protein and nu-cleic acid synthesis to be switched off, so that all of the host’s metabolic machinery becomes dedi-cated to the synthesis of phage DNA and proteins. Host nucleic acids are degraded by phage-encoded enzymes, thereby providing a supply of nucleotide building blocks. Host enzymes are employed to repli-cate phage DNA, which is then transcribed into mRNA and translated into protein.

3. Assembly: Once synthesised in sufficient quanti-ties, capsid and DNA components assemble sponta-neously into viral particles. The head and tail regions are synthesised separately, then the head is filled with the DNA genome, and joined onto the tail.

4. Release: Phage-encoded lysozyme weakens the cell wall, and leads to lysis of the celland release of viral particles;these are able to infect new host cells, and in so doing recommence the cycle. During the early phase of infection, the host cell contains components of phage, but no complete particles. This period is known as the eclipseperiod. The time which elapses between the attachment of a phage particle to the cellsurface and the release of newly-synthesised phages is the latent period (sometimes known as the burst time); for T4 under optimal conditions, this is around 22 minutes. This can be seen in a one-step growth curve, as shown in Figure 10.10. 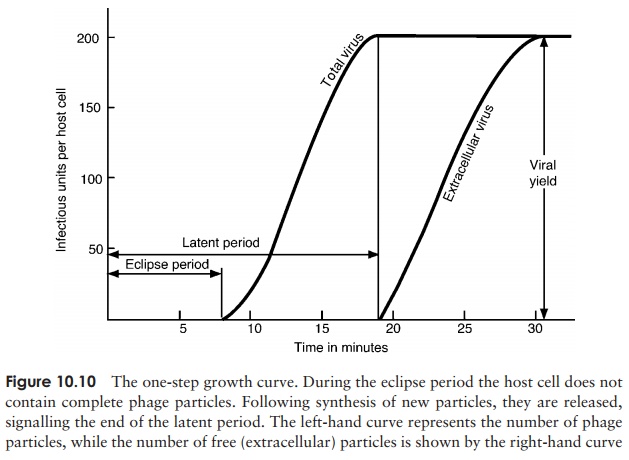 Phages such as T4, which cause the lysis of their cells, are termed virulent phages. Temperate phages, in addition to following a lytic cycle as outlined above, are able toundergo an alternative form of growth cycle. Here, the phage DNA actually becomes incorporated into the host’s genome as a prophage (Figure 10.11). In this condition of lysogeny, the host cell suffers no harm. This is because the action of repressor proteins,encoded by the phage, prevents most of the other phage genes being transcribed. These genes are, however, replicated along with the bacterial chromosome, so all the bacterial offspring contain the incorporated prophage. The lysogenic state is ended when the survival of the host cell is threatened, usually by an environmental factor such as UV light or a chemical mutagen. Inactivation of the repressor protein allows the phage DNA to be excised, and adopt a circular form in the cytoplasm. In this form, it initiates a lytic cycle, resulting in destruction of the host cell. An example of a temperate phage is bacteriophage λ (Lambda), which infects certain strains of E. coli. Bacterial strains that can incorporate phage DNA in this way are termed lysogens. 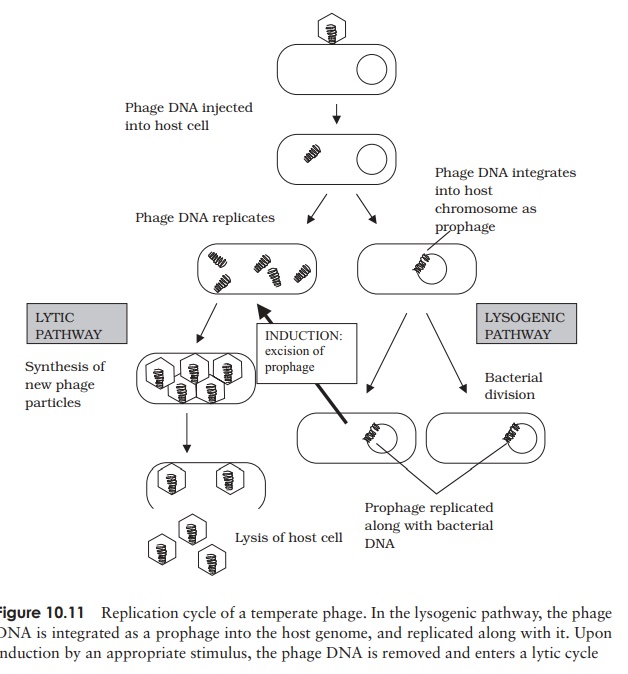