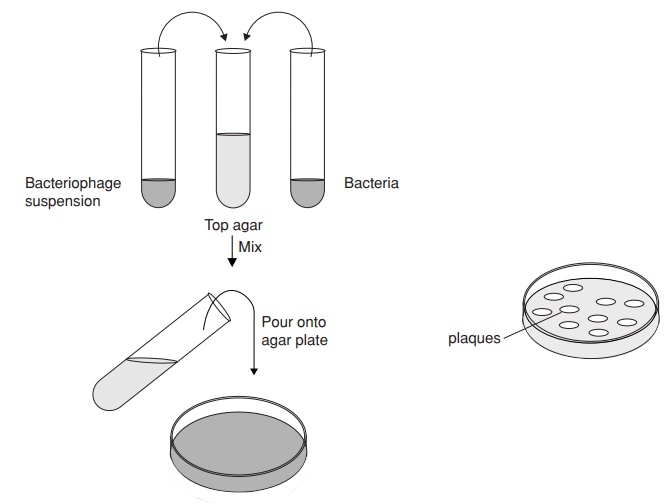 Whilst the growth of bacteria in the laboratory generally demands only a supply of the relevant nutrients and appropriate environmental conditions, maintaining viruses presents special challenges.

Whilst the growth of bacteria in the laboratory generally demands only a supply of the relevant nutrients and appropriate environmental conditions, maintaining viruses presents special challenges. Think back, and you will realise why this is so; all viruses are obligate intracellular parasites, and therefore need an appropriate host cell if they are to replicate.

Bacteriophages, for example, are grown in culture with their bacterial hosts. Stock cultures of phages are prepared by allowing them to infect a broth culture of the appro-priate bacterium. Successful propagation of phages results in a clearing of the culture’s turbidity; centrifugation removes any remaining bacteria, leaving the phage particles in the supernatant. A quantitative measure of phages, known as the titre, can be obtained by mixing them with a much greater number of bacteria and immobilising them in agar. Due to their numbers, the bacteria grow as a confluent lawn. Some become infected by phage, and when new viral particles are released following lysis of their host, they infect more host cells. Because they are immobilised in agar, the phages are only able to infect cells in the immediate vicinity. As more and more cells in the same area are lysed, an area of clearing called a plaque appears in the lawn of bacteria (Figure 10.17). Quantification is based on the assumption that each visible plaque arises from infection by a single phage particle. Thus, we speak of plaque-forming units. 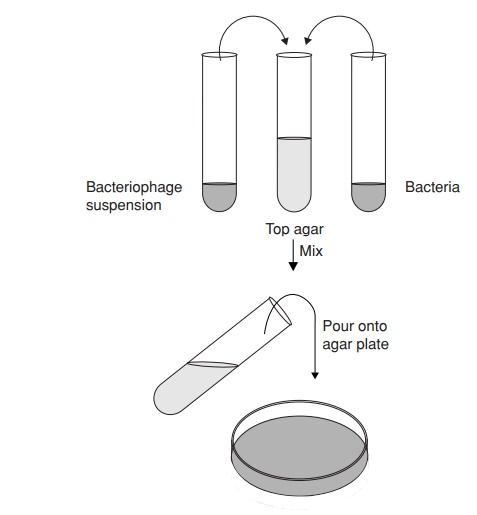 Animal viruses used to be propagated in the host animal; clearly there are limitations to this, not least when the host is human! One of the major breakthroughs in the field of virus cultivation was made in 1931 when it was shown by Alice Woodruff and Ernest Goodpasture that fertilised chicken’s eggs could serve as a host for a number of animal 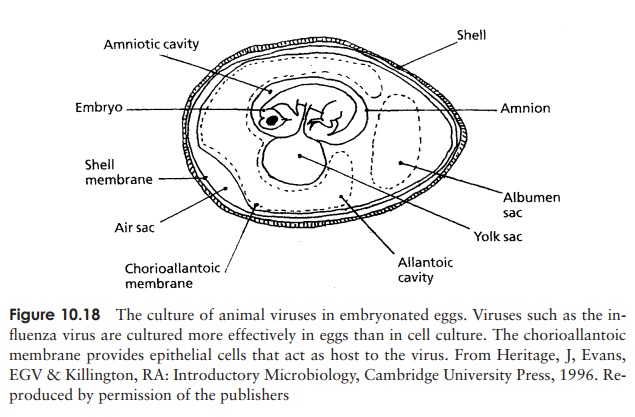 and human viruses, such as those that cause rabies and influenza. It has been said that the chicken embryo did for virus culture what agar did for the growth of bacteria. Depending on the virus in question, inoculation can be made into the developing embryo itself or into one of the various membranes and cavities such as the chorioallantoic membrane or the allantoic cavity (Figure 10.18). Viral propagation is demonstrated by death of the embryo, or the appearance of lesions on the membranes.

In the 1950s, cell culture techniques advanced, thanks in part to the widespread avail-ability of antibiotics, making the control of bacterial contamination much more readily achieved. Cells are usually grown as monolayers in tissue culture flasks containing a suitable liquid growth medium. Treatment with the protease trypsin dissolves the con-nective tissue matrix between the cells, allowing them to be harvested, and used to seed new cultures. Changes in cell morphology, known generically as cytopathic effects, are indicators of viral infection, and may be used diagnostically in the identification of specific viral types.

Plant viruses need to overcome the barrier presented by the cellulose cell wall of the plant; in nature this is often achieved by the piercing mouthparts of an insect vector or by entering areas of damaged tissue. Experimentally, viruses can be introduced into an appropriate host by rubbing the surface of a leaf with the virus together with a mild abrasive to create a minor wound.