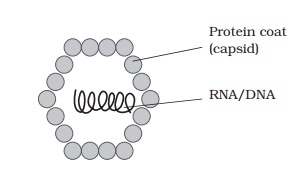 The demonstration by Wendel Stanley in 1935 that a preparation of tobacco mosaic virus could be crystallised was an indication of the relative chemical homogeneity of viruses, and meant that they could not be thought of in the same terms as other living things.

The demonstration by Wendel Stanley in 1935 that a preparation of tobacco mosaic virus could be crystallised was an indication of the relative chemical homogeneity of viruses, and meant that they could not be thought of in the same terms as other living things. Compared to even the most primitive cellular organism, viruses have a very simple structure (Figure 10.1). An intact viral particle, or virion, has in essence just two components: a core of nucleic acid, surrounded and protected by a protein coat orcapsid, the combination of the two being known as the nucleocapsid. In certain virustypes, the nucleocapsid is further surrounded by a membranous envelope, partly derived from host cell material. Most viruses are smaller than even the smallest bacterial cells; Figure 10.2 shows the size of some viruses compared to that of typical bacterial and eucaryotic cells. 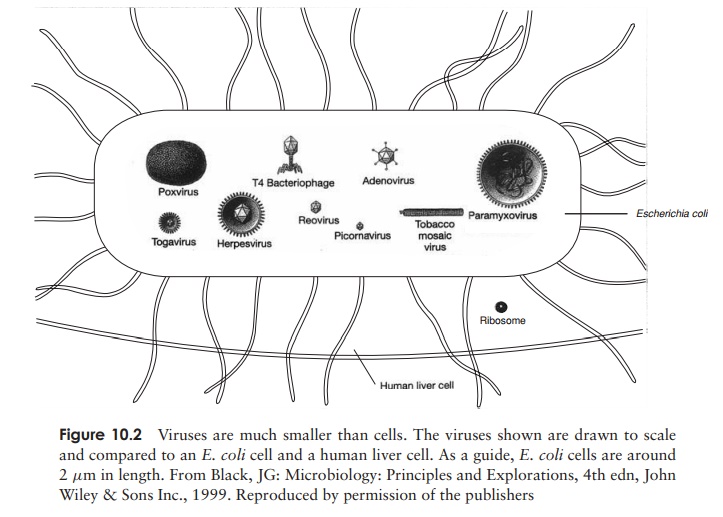 The genetic material of a virus may be either RNA or DNA, and either of these may be single-stranded or double-stranded (Figure 10.3). As shown in Figure 10.4, the genome may furthermore be circular or linear. An additional variation in the viral genome is 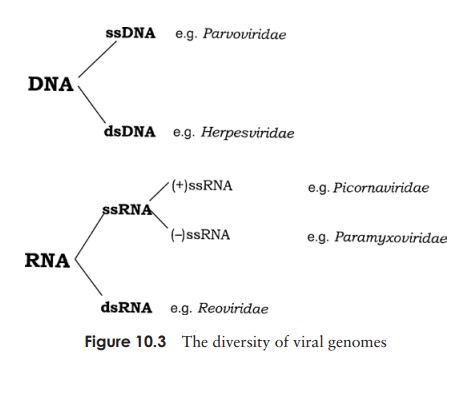 seen in certain RNA viruses, such as the influenza virus; here, instead of existing as a single molecule, it is segmented, existing as several pieces, each of which may encode a separate protein. In some plant viruses, the segments may be present in separate particles, so in order for replication to occur, a number of virions need to co-infect a cell, thereby complementing each other (multipartite genomes)! Double-stranded RNA is always present in the segmented form. 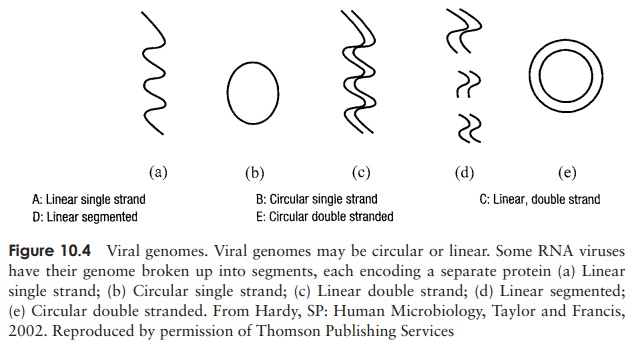 The size of the genome varies greatly; it may contain as few as four genes or as many as over 200. These genes may code for both structural and non-structural proteins; the latter include enzymes such as RNA/DNA polymerases required for viral replication.

Single-stranded RNA viral genomes can be divided into two types, known as (+)sense and (−) sense RNA. The former is able to act as mRNA, attach to ribosomes andbecome translated into the relevant proteins within the host cell. As such, it is infectious in its own right. Minus (−) sense RNA, on the other hand, is only infectious in the presence of a capsid protein possessing RNA polymerase activity. This is needed to convert the (−) RNA into its complementary (+) strand, which then acts as a template for protein production, as described above.

When DNA forms the genome of viruses, it is usually double-stranded (dsDNA), although some of the smaller ones such as the parvoviruses have ssDNA (Figure 10.3).

The characteristic shape of a virus particle is determined by its protein coat or capsid. In the non-enveloped viruses, the capsid represents the outermost layer, and plays a role in attaching the virus to the surface of a host cell. It also acts to protect the nucleic acid against harmful environmental factors such as UV light and desiccation, as well as the acid and degradative enzymes encountered in the gastrointestinal tract. 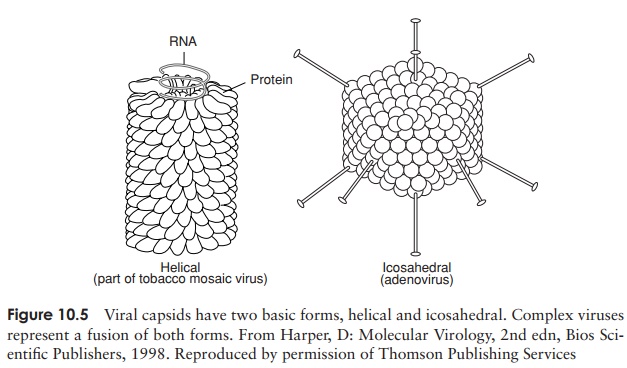 The capsid is made up of a number of subunits called capsomers (Figure 10.5), and may comprise a few different protein types or just one. The number of cap-somers is constant for a particular viral type. This repetitive subunit construction is necessitated by the small amount of protein-encoding RNA/DNA in the viral genome. The capsomers have the ability to interact with each other spontaneously to form the completed capsid by a process of self-assembly. This would be less easily achieved if there were large numbers of different protein types. Capsomers are arranged symmet-rically, giving rise to two principal capsid shapes,icosahedral and helical (Figure 10.5). Both shapes can be found in either enveloped or non-enveloped viruses. Complex viruses, such as certain bacteriophages, contain elements of both helical and icosahedral symmetry.

A number of plant viruses, including the well-studied tobacco mosaic virus, have a rod-like structure when viewed under the electron microscope (Figure 10.5a). This is caused by a helical arrangement of capsomers, resulting in a tube or cylinder, with room in the centre for the nucleic acid element, which fits into a groove on the inside. The diameter of the helix is determined by the nature of the protein(s) making up the capsomers; its length depends on the size of the nucleic acid core

Icosahedral capsids An icosahedron is a regular three-dimensional shape with 20 triangular faces, and 12 points or corners (Fig-ure 10.5). The overall effect is of a roughly spherical structure.

Envelopes are much more common in animal viruses than in those of plants. The lipid bilayer covering an enveloped virus is derived from the nuclear or cytoplasmic membrane of a previous host. Embedded in this, however, are proteins (usually glycoproteins) encoded by the virus’s own genome. These may project from the surface of the virion as spikes, which may be instrumental in allowing the virus to bind to or penetrate its host cell (Figure 10.6). The envelope is more susceptible than the capsid to environmental pressures, and the virus needs to remain moist in order to survive. Consequently, such viruses are transmitted by means of body fluids such as blood (e.g. hepatitis B virus) or respiratory secretions (e.g. influenza virus).