Vectors based on bacteriophages

Bacteriophages are viruses that infect bacterial cells by injecting their DNA into them and consequently take over the machinery of the bacterial cells to multiply themselves.

Vectors based on bacteriophages

Bacteriophages are viruses that infect bacterial cells by injecting their DNA into them and consequently take over the machinery of the bacterial cells to multiply themselves. The injected DNA hence is selectively replicated and expressed in the host bacterial cell resulting in a number of phages which eventually extrude out of the cell (lytic pathway) and infect neighbouring cells. This ability to transfer DNA from the phage genome to specific bacterial hosts during the process of viral infection gave scientists the idea that specifically designed phage based vectors would be useful tools for gene cloning experiments. Two phages that have been extensively modified for the development of cloning vectors are lambda (ë) and M13 phages.

Bacteriophage lambda has a double stranded, linear DNA genome containing 48,514 bp, in which 12 bases on each end are unpaired but complementary. These ends therefore are sticky and are called cohesive or cos sites and are important for packaging DNA into phage heads. An important feature of the lambda genome is that a large fragment in the central region of its genome is not essential for lytic infection of E. coli cells. Therefore, vectors have been designed such that this region can be replaced by foreign insert DNA. These phage based vectors allow cloning of DNA fragments up to 23 kb in size.

M13 is a filamentous phage which infects E. coli having a pilus (protrusion) which is selectively present in cells containing a F plasmid (called F+ cells). The genome of the M13 phage is a single stranded, circular DNA of 6407 bp. Foreign DNA can be inserted into it without disrupting any of the essential genes. In the life cycle of the phage following infection of the host E.coli cell the single stranded DNA is converted to a double-stranded molecule which is referred to as the Replicative Form (RF). The RF replicates until there are about 100 copies in the cell. At this point DNA replication becomes asymmetric and single stranded copies of the genome are produced and extruded from the cell packaged with protein as M13 particles (Fig. 5). The major advantages of developing vectors based on M13 are that its genome is less than 10 kb in size; the RF can be purified and manipulated exactly like a plasmid. In addition, genes cloned into M13 based vectors can be obtained in the form of single stranded DNA. Single stranded forms of cloned DNA are useful for use in various techniques including DNA sequencing and site-directed mutagenesis, techniques which will be discussed in a latter section. 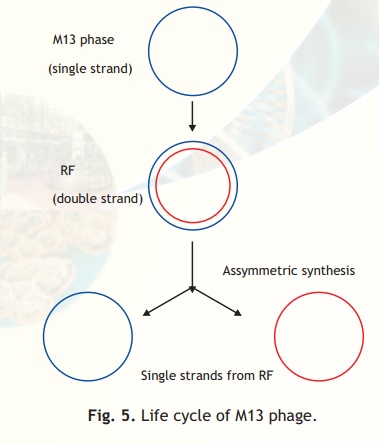