The tenth cranial nerve not only supplies areas in the head region like the other cranial nerves, it also descends into thorax and abdomen where it ramifies in the viscera like a plexus.

The tenth cranial nerve not only supplies areas in the head region like the other cranial nerves, it also descends into thorax and abdomen where it ramifies in the viscera like a plexus. It is the strongest para-sympathetic nerve of the autonomic nervoussystem and, hence, the most important antag-onist of the sympathetic nervous system.

It has the following components:

The motor fibers for the branchial arch muscles (AB4) originate from large multi-polar neurons in the ambiguous nucleus (AB5).

The visceromotor fibers (AB6) originate in the parvocellular posterior nucleus of thevagus nerve (AB7), which lies laterally tothe nucleus of the hypoglossal nerve in the floor of the rhomboid fossa. 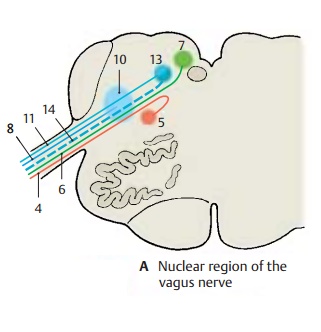 The exteroceptive sensory fibers (AB8) origi-nate from neurons in the superior ganglion. They descend with the terminal trigeminalroot (B9) and terminate in thespinal nu-cleus of the trigeminal nerve (AB10).

In addition to a meningeal branch (sensory supply to the dura mater in the posterior cranial fossa), the vagus nerve gives off the auricular branch (B15). The latter branchesoff at the superior ganglion, passes through the mastoid canaliculus, and reaches the ex-ternal meatus through the tympanomastoidfissure. It supplies the skin of the meatus inthe dorsal and caudal region (D) and a small area of the auricula (C) (exteroceptive sensory component of the nerve). It gives off four branches:

1 The pharyngeal branches (B16) at the level of the inferior ganglion. They com-bine in the pharynx with fibers of the glossopharyngeal nerve and the sympa-thetic nervous system to form thepharyn-geal plexus. At the outer surface of themuscles and in the submucosa of the pharynx, the latter forms a meshwork of fine fibers with groups of neurons. The vagal fibers provide sensory innervation to the muscosa of the trachea and mu-cosa of the esophagus including the epiglottis (E, F). The taste buds (E) on the epiglottis are also supplied by the vagus nerve. (Continued p. 116.) 2. The superior laryngeal nerve (A2) origi-nates below the inferior ganglion (nodose ganglion) and divides at the level of the hyoid bone into an external branch (motor branch for the cricothyroid muscle) and an internal branch (sensory branch for the mucosa of the larynx as far down as the vocal cords).

3. The recurrent laryngeal nerve (A3) branches off in the thorax after the vagus nerve has extended on the left over the arch of the aorta (A4) and on the rightacross the subclavian artery (A5). It passes on the left around the aorta and the ligamentum arteriosum and on the right around the subclavian artery and then ascends behind the artery. Between trachea and esophagus, to which it gives off the tracheal branches (A6) and the esophageal branches, it extends up to thelarynx. Its terminal branch, the inferiorlaryngeal nerve (A7), supplies motor fibersto all laryngeal muscles except for the cri-cothyroid muscle, and sensory fibers to the laryngeal mucosa below the vocal cords.

The motor fibers originate from the ambigu-ous nucleus, the cell groups of which showa somatotopic organization: The fibers of the glossopharyngeal nerve arise in the cranial part, those of the superior laryngealnerve further below, and those of the inferior laryngeal nerve caudally, whereby the neu-rons for abduction and adduction are ar-ranged one below the other (C).

4. The cervical cardiac branches (pregan-glionic parasympathetic fibers). The supe-rior branches (A8) depart at various levelsand run with the large vessels to the heart, where they terminate in the para-sympathetic ganglia of the cardiac plexus. One of the branches carries viscero-sensory fibers that transmit information about aortic wall tension. Stimulation of these fibers causes a fall in blood pres-sure (depressor nerve). The inferior cervi-cal cardiac branches (A9) depart from therecurrent laryngeal nerve or from the main trunk and terminate in the ganglia of the cardiac plexus.

Clinical Note: Injury to the vagus nerve leadsto deficiencies in both pharynx and larynx (F) (see vol. 2). In the case of unilateral paralysis of the levator muscle of the velum palatinum (F18), the soft palate and uvula are pulled toward the healthy side. The vocal cord of the affected side (F19) remains immobilized in the cadaver position owing to paralysis of the internal laryngeal muscles (recurrent laryngeal paralysis). E shows the normal positions.

Thoracic and Abdominal Part (A, D)

The vagus nerve loses its identity as a single nerve; as a visceral nerve, it spreads out like a network. It forms the pulmonary plexus (A10) at the hilum of the lung, which it crosses dorsally, and the esophageal plexus (A11), from which the anterior vagal trunk (A12) and the posterior vagal trunk (A13) ex-tend to the anterior and posterior aspects of the stomach, forming the anterior (A14) and posterior gastric branches. The hepatic branches (A15) run to the hepatic plexus, the celiac branches (A16) to the celiac plexus,and the renal branches (A17) to the renalplexus.

The preganglionic visceromotor (parasym-pathetic) fibers originate from the posteriornucleus of the vagus nerve, in which a so-matotopic organization of the visceral supply can be recognized (D).