Base of the Skull

The base of the skull holds the brain. Three bony depressions on each side correspond to the basal aspects of the brain;

Base of the Skull

The base of the skull holds the brain. Three bony depressions on each side correspond to the basal aspects of the brain; the basal aspect of the frontal lobe lies in the anteriorcranial fossa (A1), that of the temporal lobe inthe middle cranial fossa (A2), and the basal aspect of the cerebellum in the posteriorcranial fossa (A3). (For the participation ofbones in and the boundaries of the cranial fossae, see vol. 1.) The cranial cavity is lined by a hard meninx, the dura mater; its two layers form both a cover for the brain and the periosteum. Embedded between these two layers are large venous sinuses. Nerves and blood vessels pass through numerous foramina in the base of the skull (see vol. 1).

On the floor of the anterior cranial fossa close to the midline, the olfactory nerves pass through the openings of the thin lamina cribrosa to the olfactory bulb (A4).The sella turcica rises between the two middle cranial fossae; its depression con-tains the hypophysis (A5), which is attached to the floor of the diencephalon. Lateral to the sella turcica, the internal carotid artery

(A6) passes through the carotid canal into the cranial cavity. Its S-shaped course by-passes the cavernous sinus (A7). The opticnerve (A8) enters the cranial cavity throughthe optic canal in the medial area of the fossa, while the eye-muscle nerves leave the cavity through the superior orbital fissure (see vol. 1). The paths of the abducens nerve (A9) and the trochlear nerve (A10) are charac-terized by their intradural position. The ab-ducens nerve enters the dura at the middle level of the clivus, and the trochlear nerve enters at the edge of the clivus at the attach-ment of the tentorium. The oculomotor nerve (A11) and the trochlear nerve run through the lateral wall of the cavernous sinus, and the abducens nerve through the laterobasal sinus of the internal carotid artery (see vol. 2). The trigeminal nerve (A12) reaches below a dural bridge into the middle cranial fossa where the trigeminal ganglion (A13) lies in a pocket formed by the two dural layers, the trigeminal cavity. The three trigeminalbranches leave the cranial cavity through different openings; after passing through the wall of the cavernous sinus, the ophthal-mic nerve (A14) extends with its branchesthrough the orbital fissure, the maxillarynerve (A15) through theround foramen, andthe mandibular nerve (A16) through the ovalforamen. 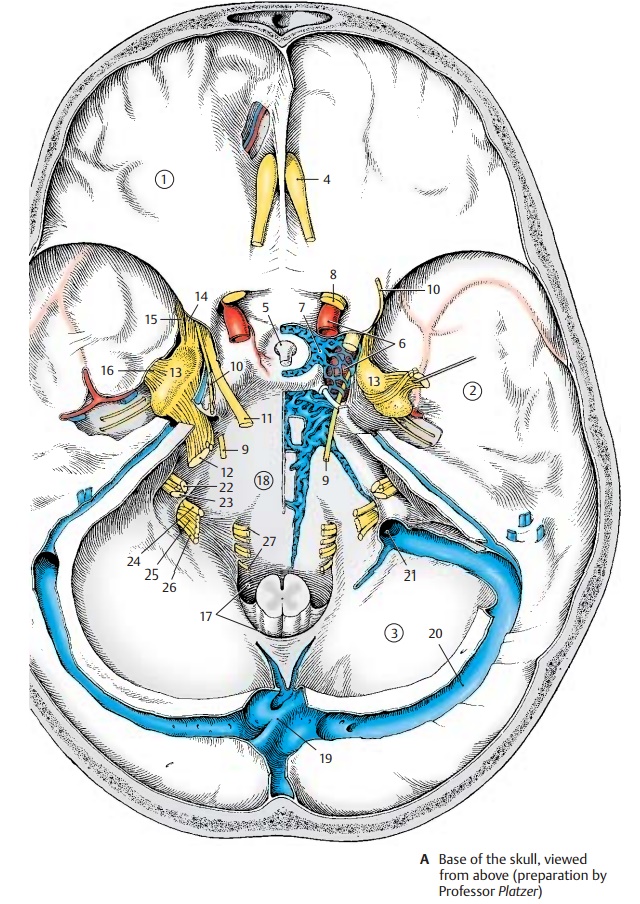 The two posterior cranial fossae surround the foramen magnum (A17) to which the clivus (A18) descends steeply from the sellaturcica. The brain stem rests on the clivus, and the cerebellar hemispheres fit into the two basal fossae. From the confluence ofsinuses (A19), the transverse sinus (A20) em-braces the posterior cranial fossa and opens into the internal jugular vein (A21). The facialnerve (A22) and the vestibulocochlear nerve (A23) enter the auditory canal, the internalacoustic meatus. Basal to the meatus, theglossopharyngeal nerve (A24), vagus nerve (A25), and accessory nerve (A26) pass through the anterior part of the jugularfossa. The fiber bundles of thehypoglossalnerve (A27) pass as a single nerve throughthe hypoglossal canal.