Why the Architecture is the Way it is: Rationale

WHY THE ARCHITECTURE IS THE WAY IT IS: RATIONALE

·     the implications of system-wide design choices on meeting the requirements or satisfying constraints.

·     the effect on the architecture when adding a foreseen new requirement or changing an existing one.

·     the constraints on the developer in implementing a solution.

·     decision alternatives that were rejected.

In general, the rationale explains why a decision was made and what the implications are in changing it.

We have concentrated on the kind of information that should be included in architecture documentation. Architecture in some sense expresses what is essential about a software system, and that essence is independent of languages and notations to capture it. Nevertheless, today the Unified Modeling Language (UML) has emerged as the de facto standard notation for documenting a software architecture. However, it must be said that UML makes its main contribution in a view's primary presentation, and its secondary contribution in the behavior of an element or group of elements. It is up to the architect to augment the UML pictures with the necessary supporting documentation (the element catalog, the rationale, and so forth) that a responsible job requires. UML provides no direct support for components, connectors, layers, interface semantics, or many other aspects of a system that are supremely architectural.

Still, in most cases we can use the constructs that UML does offer to achieve satisfactory effects, at least in crafting the primary presentations of architectural views. We begin by discussing module views.

Recall that a module is a code or implementation unit and a module view is an enumeration of modules together with their interfaces and their relations.

Figure 9.4 shows how module interfaces can be represented in UML. UML uses a "lollipop" to denote an interface, which can be appended to classes and subsystems, among other things.

UML also allows a class symbol (box) to be stereotyped as an interface; the open-headed dashed arrow shows that an element realizes an interface. The bottom of the class symbol can be annotated with the interface's signature information: method names, arguments, argument types, and so forth. The lollipop notation is normally used to show dependencies from elements to the interface, while the box notation allows a more detailed description of the interface's syntax, such as the operations it provides.

UML provides a variety of constructs to represent different kinds of modules. Figure 9.5 shows some examples. UML has a class construct, which is the object-oriented specialization of a module. Packages can be used in cases where grouping of functionality is important, such as to represent layers and classes. The subsystem construct can be used if a specification of interface and behavior is required. 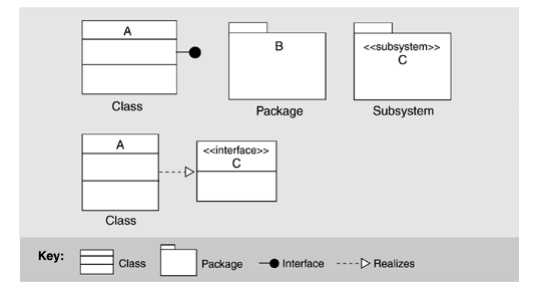 Figure 9.6. Examples of relation notations in UML. Module B is part of module A, module D depends on module C, and module F is a type of module E. 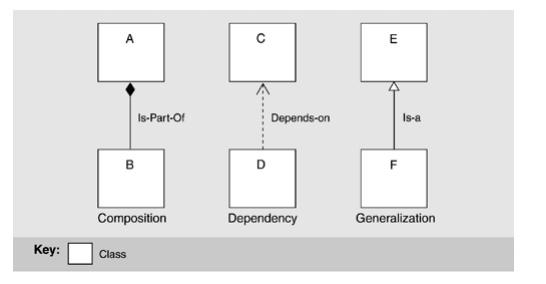 In UML, the subsystem construct can be used to represent modules that contain other modules; the class box is normally used for the leaves of the decomposition. Subsystems are used both as packages and as classifiers. As packages, they can be decomposed and hence are suitable for module aggregation. As classifiers, they encapsulate their contents and can provide an explicit interface. Aggregation is depicted in one of three ways in UML:

·     A succession of two diagrams (possibly linked) can be shown, where the second is a depiction of the contents of a module shown in the first.

·     An arc denoting composition is drawn between the parent and the children (see Figure 9.7 right).

In UML, composition is a form of aggregation with implied strong ownership-that is, parts live and die with the whole. If module A is composed of modules B and C, then B or C cannot exist without A, and if A is destroyed at runtime, so are B and C. Thus, UML's composition relation has implications beyond the structuring of the implementation units; the relation also endows the elements with a runtime property. As an architect, you should make sure you are comfortable with this property before using UML's composition relation.

Expressing generalization is at the heart of UML in which modules are shown as classes (although they may also be shown as subsystems). Figure 9.8 shows the basic notation available in UML.

The two diagrams in Figure 9.8 are semantically identical. UML allows an ellipsis (…) in place of a submodule, indicating that a module can have more children than shown and that additional ones are likely. Module Shape is the parent of modules Polygon, Circle, and Spline, each of which is a subclass, child, or descendant of Shape. Shape is more general, while its children are specialized versions.

The basic notation for dependency was shown in Figure 9.6. The most architecturally significant manifestation of dependency is found in layers. Sadly, UML has no built-in primitive corresponding to a layer. However, it can represent simple layers using packages, as shown in Figure 9.9. These are general-purpose mechanisms for organizing elements into groups. UML has predefined packages for systems and subsystems. We can introduce an additional package for layers by defining it as a package stereotype. A layer can be shown as a UML package with the constraints that it groups modules together and that the dependency between packages is "allowed to use." We can designate a layer using the package notation with the stereotype name <<layer>> preceding the layer name, or introduce a new visual form, such as a shaded rectangle.

Figure 9.9. A simple representation of layers in UML