In UML, a deployment diagram is a graph of nodes connected by communication associations.

In UML, a deployment diagram is a graph of nodes connected by communication associations. Figure 9.13 provides an example. Nodes may contain component instances, which indicates that the component lives or runs on the node. Components may contain objects, which indicates that the object is part of the component. Components are connected to other components by dashed-arrow dependencies (possibly through interfaces). This indicates that one component uses the services of another; a stereotype may be used to indicate the precise dependency if needed. The deployment type diagram may also be used to show which components may run on which nodes, by using dashed arrows with the stereotype «supports».

Figure 9.13. A deployment view in UML 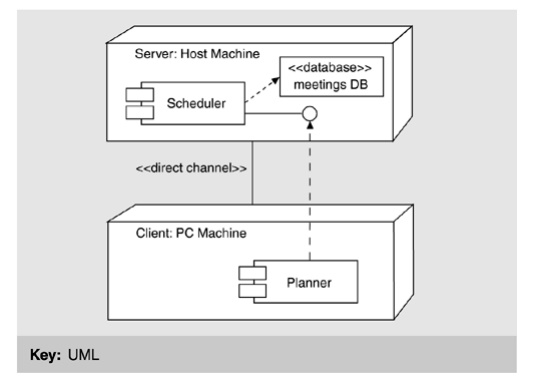 A node is a runtime physical object that represents a processing resource, generally having at least a memory and often processing capability as well. Nodes include computing devices but also human or mechanical processing resources. Nodes may represent types of instances. Runtime computational instances, both objects and components, may reside on node instances.