There is no single preferred strategy to document component-and-connector (C&C) views in UML, but a number of alternatives. Each alternative has its advantages and disadvantages.

Figure 9.10 illustrates the general idea using a simple pipe-and-filter system. Here, the filter architectural type is represented as the UML class Filter. Instances of filters, such as Splitter, are represented as corresponding objects in an object instance diagram. To provide a namespace boundary, we enclose the descriptions in packages. The representation of MergeAndSort, denoted Details, would be shown as another package elsewhere.

Figure 9.10. Types as classes, and instances as objects, exemplified with a simple pipe and filter 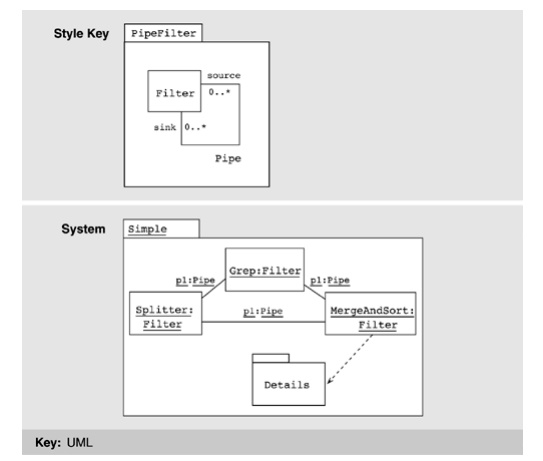 We now take a closer look at this strategy.

The type/instance relationship in architectural descriptions is a close match to the class/object relationship in a UML model. UML classes, like component types in architectural descriptions, are first-class entities and are rich structures for capturing software abstractions. The full set of UML descriptive mechanisms is available to describe the structure, properties, and behavior of a class, making this a good choice for depicting detail and using UML-based analysis tools. Properties of architectural components can be represented as class attributes or with associations; behavior can be described using UML behavioral models; and generalization can be used to relate a set of component types. The semantics of an instance or type can also be elaborated by attaching one of the standard stereotypes; for example, the «process» stereotype can be attached to a component to indicate that it runs as a separate process. Note that the relationship between MergeAndSort and its substructure is indicated using a dependency relation.

Interfaces to components, sometimes called ports, can be shown in five ways, as shown in Figure 9.11, described in increasing order of expressiveness. However, as expressiveness rises so does complexity, so you should pick the first strategy that will serve your purposes.

·     Option 1: No explicit representation. Leaving out interfaces leads to the

simplest diagrams but suffers from the obvious problem that there is no way to characterize the names or the properties of the interfaces in the primary presentation. Still, this choice might be reasonable if the components have only one interface, if the interfaces can be inferred from the system topology, or if the diagram is refined elsewhere.

annotations provides a home for information about them, although annotations have no semantic value in UML so cannot be used as a basis for analysis. Again, if the detailed properties of an interface are not of concern, this approach might be reasonable.

attributes of a class/object makes them part of the formal structural model, but they can have only a simple representation in a class diagram-essentially, a name and a type. This restriction limits the expressiveness of this option.

However, this strategy provides no means to depict the services required from a component's environment, often a key part of an interface. Furthermore, it is meaningful for a component type to have several instances of the same interface type, but it is not meaningful to say that a class realizes several versions of one UML interface. For example, there is no easy way to define a Splitter filter type that has two output ports of the same "type" using this technique. Finally, unlike classes, UML interfaces do not have attributes or substructure.

·     Option 5: Interfaces as classes. Describing interfaces as classes contained by a component type overcomes the lack of expressiveness of the previous alternatives: We can now represent interface substructure and indicate that a component type has several interfaces of the same type. A component instance is modeled as an object containing a set of interface objects. However, by representing interfaces as classes, we not only clutter the diagram but also lose clear visual discrimination between interfaces and components. We could use a notational variation in which the interfaces are contained classes, as shown in the lower part of option 5 in Figure 9.11. Indicating points of interaction is counterintuitive, however, as containment usually indicates that a class owns other classes whose instances may or may not be accessible through instances of the parent class. 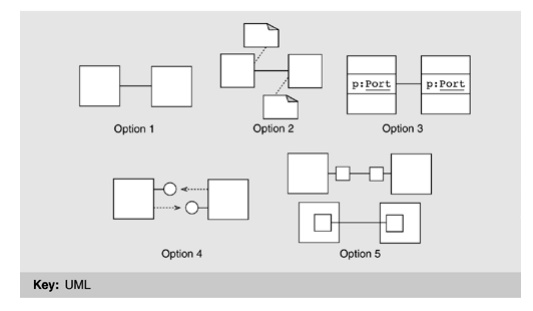 There are three reasonable options for representing connectors. Again, the choice is between expressiveness and semantic match on the one hand and complexity on the other.

·    Option 1: Connector types as associations and connector instances as links. In an architectural box-and-line diagram of a system, the lines between components are connectors. One tempting way to represent connectors in UML is as associations between classes or links between objects. This approach is visually simple, provides a clear distinction between components and connectors, and uses the most familiar relationship in UML class diagrams: association. Moreover, associations can be labeled, and a direction associated with the connector can be indicated with an arrow. Unfortunately, connectors and associations have different meanings. A system in an architectural description is built up by choosing components with behavior exposed through their interfaces and connecting them with connectors that coordinate their behaviors. A system's behavior is defined as the collective behavior of a set of components whose interaction is defined and limited by the connections between them.

In contrast, although an association, or link, in UML represents a potential for interaction between the elements it relates, the association mechanism is primarily a way of describing a conceptual relationship between two elements. In addition, an association is a relationship between UML elements, so it cannot stand on its own in a UML model. Consequently, a connector type cannot be represented in isolation. Instead, you must resort to naming conventions or to stereotypes whose meanings are captured by description in UML's object constraint language. Further, the approach does not allow you to specify a connector's interfaces.

·     Option 1: Systems as UML subsystems. The primary UML mechanism for grouping related elements is the package. In fact, UML defines a standard package stereotype, called «subsystem», to group UML models that represent a logical part of a system. The choice of subsystems is appropriate for any mapping of components and connectors, and it works particularly well for grouping classes. One of the problems with using subsystems, as defined in UML 1.4, is that, although they are both a classifier and a package, the meaning is not entirely clear. Some have argued that we should be able to treat a subsystem as an atomic class-like entity at certain stages in the development process and later be able to refine it in terms of a more detailed substructure. Having the ability to do this would make the subsystem construct more appropriate for modeling architectural components.

·     Option 2: Systems as contained objects. Object containment can be used to represent systems. Components are represented as instances of contained classes, and connectors are modeled using one of the options outlined earlier. Objects provide a strong encapsulation boundary and carry with them the notion that each instance of the class has the associated "substructure." However, this approach has problems, the most serious being that associations, used to model connectors, between contained classes are not scoped by the class. That is, it is not possible to say that a pair of classes interacts via a particular connector, modeled as an association, only in the context of a particular system. So, for example, indicating that two contained classes interact via an association is valid for instances of classes used anywhere else in the model.

connected by links is described in UML using a collaboration. If we represent components as objects, we can use collaborations to represent systems. A collaboration defines a set of participants and relationships that are meaningful for a given purpose, which in this case is to describe the runtime structure of the system. The participants define classifier roles that objects play, or conform to, when interacting. Similarly, the relationships define association roles that links must conform to.

Figure 9.12 illustrates this approach. The Filter architectural type is represented as previously. Instances of filters and pipes are represented as corresponding classifier roles-for example, /Splitter indicates the Splitter role-and association roles. The objects and links conforming to those roles are shown in the collaboration diagram at the instance level, indicated by underscored names. 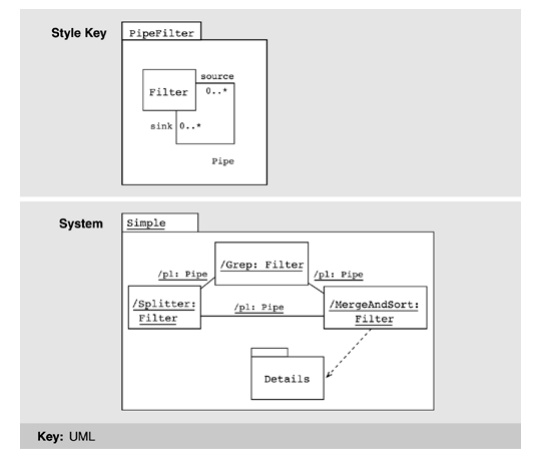 Although this is a natural way to describe runtime structures, it leaves no way to explicitly represent system-level properties. There is also a semantic mismatch; a collaboration describes a representative interaction between objects and provides a partial description, whereas an architectural configuration is meant to capture a complete description.