An interface is a boundary across which two independent entities meet and interact or communicate with each other. Since you cannot perform analyses or system building without them, documenting interfaces is an important part of documenting architecture.

An interface is a boundary across which two independent entities meet and interact or communicate with each other. Since you cannot perform analyses or system building without them, documenting interfaces is an important part of documenting architecture.

Documenting an interface consists of naming and identifying it and documenting its syntactic and semantic information. The first two parts constitute an interface's "signature." When an interface's resources are invokable programs, the signature names the programs and defines their parameters. Parameters are defined by their order, data type, and (sometimes) whether or not their value is changed by the program. A signature is the information that you would find about the program, for instance, in an element's C or C++ header file or in a Java interface.

Signatures are useful (for example, they can enable automatic build checking), but are only part of the story. Signature matching will guarantee that a system will compile and/or link successfully. However, it guarantees nothing about whether the system will operate successfully, which is after all the ultimate goal. That information is bound up in the semantics to the interface, or what happens when resources are brought into play.

An interface is documented with an interface specification, which is a statement of element properties the architect chooses to make known. The architect should expose only what is needed to interact with the interface. Put another way, the architect chooses what information is permissible and appropriate for people to assume about the element, and what is unlikely to change. Documenting an interface is a matter of striking a balance between disclosing too little information and disclosing too much. Too little information will prevent developers from successfully interacting with the element. Too much will make future changes to the system more difficult and widespread and make the interface too complicated for people to understand. A rule of thumb is to focus on how elements interact with their operational environments, not on how they are implemented. Restrict the documentation to phenomena that are externally visible.

A Template for Documenting Interfaces

Here is a suggested standard organization for interface documentation. You may wish to modify it to remove items not relevant to your situation, or add items unique to it. More important than which standard organization you use is the practice of using one. Use what you need to present an accurate picture of the element's externally visible interactions for the interfaces in your project.

1.     Interface identity. When an element has multiple interfaces, identify the individual interfaces to distinguish them. This usually means naming them. You may also need to provide a version number.

2.     Resources provided. The heart of an interface document is the resources that the element provides. Define them by giving their syntax, their semantics (what happens when they are used), and any restrictions on their usage. Several notations exist for documenting an interface's syntax. One is the OMG's Interface Definition Language (IDL), used in the CORBA community. It provides language constructs to describe data types, operations, attributes, and exceptions. The only language support for semantic information is a comment mechanism. Most programming languages have built-in ways to specify the signature of an element. C header (.h) files and Ada package specifications are two examples.

Finally, using the <<interface>> stereotype in UML (as shown in Figure 9.4) provides the means for conveying syntactic information about an interface. At a minimum, the interface is named; the architect can also specify signature information.

o       Resource semantics. This describes the result of invoking the resource. It might include

-   assignment of values to data that the actor invoking the resource can access. It might be as simple as setting the value of a return argument or as far-reaching as updating a central database.

-    humanly observable results. These are prevalent in embedded systems; for example, calling a program that turns on a display in a cockpit has a very observable effect: The display comes on.

In  addition, the statement of semantics should         make it        clear  whether the resource execution will be atomic or may be suspended or interrupted. The most widespread notation for conveying semantic information is natural language. Boolean algebra is often used to write down preconditions and postconditions, which provide a relatively simple and effective method for expressing semantics. Traces are also used to convey semantic information by writing down sequences of activities or interactions that describe the element's response to a specific use.

o       Resource usage restrictions. Under what circumstances may this resource be used? Perhaps data must be initialized before it can be read, or a particular method cannot be invoked unless another is invoked first. Perhaps there is a limit on the number of actors that can interact via this resource at any instant. Perhaps only one actor can have ownership and be able to modify the element whereas others have only read access. Perhaps only certain resources or interfaces are accessible to certain actors to support a multi-level security scheme. If the resource requires that other resources be present, or makes other assumptions about its environment, these should be documented.

3.     Data type definitions. If any interface resources employ a data type other than one provided by the underlying programming language, the architect needs to communicate the definition of that data type. If it is defined by another element, then a reference to the definition in that element's documentation is sufficient. In any case, programmers writing elements using such a resource need to know (a) how to declare variables and constants of the data type; (b) how to write literal values in the data type; (c) what operations and comparisons may be performed on members of the data type; and (d) how to convert values of the data type into other data types, where appropriate.

4.     Exception definitions. These describe exceptions that can be raised by the resources on the interface. Since the same exception might be raised by more than one resource, it is often convenient to simply list each resource's exceptions but define them in a dictionary collected separately. This section is that dictionary. Common exception-handling behavior can also be defined here.

configured in some way? These configuration parameters and how they affect the semantics of the interface must be documented. Examples of variability include the capacities of visible data structures and the performance characteristics of underlying algorithms. Name and provide a range of values for each configuration parameter and specify the time when its actual value is bound.

7.     Element requirements. What the element requires may be specific, named resources provided by other elements. The documentation obligation is the same as for resources provided: syntax, semantics, and any usage restrictions. Often it is convenient to document information like this as a set of assumptions that the element's designer has made about the system. In this form, they can be reviewed by experts who can confirm or repudiate the assumptions before design has progressed too far.

8.     Rationale and design issues. As with rationale for the architecture (or architectural views) at large, the architect should record the reasons for an element's interface design. The rationale should explain the motivation behind the design, constraints and compromises, what alternative designs were considered and rejected (and why), and any insight the architect has about how to change the interface in the future.

9.     Usage guide. Item 2 and item 7 document an element's semantic information on a per resource basis. This sometimes falls short of what is needed. In some cases semantics need to be reasoned about in terms of how a broad number of

-    individual interactions interrelate. Essentially, aprotocol is involved that is documented by considering a sequence of interactions. Protocols can represent the complete behavior of the interaction or patterns of usage that the element designer expects to come up repeatedly. If interacting with the element via its interface is complex, the interface documentation should include a static behavioral model such as a statechart, or examples of carrying out specific interactions in the form of sequence diagrams. This is similar to the view-level behaviors presented in the previous section, but focused on a single element. 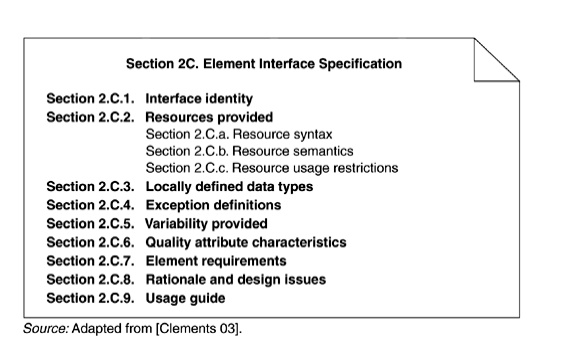