Ultrasonography - Radiology of the Urinary Tract: Techniques and Normal Anatomy

Ultrasound is a useful technique for evaluation of the urinary tract, with its principal advantages including wide availability, no need for intravenous contrast material, and lack of ionizing radiation.

Ultrasound is a useful technique for evaluation of the urinary tract, with its principal advantages including wide availabil-ity, no need for intravenous contrast material, and lack of ionizing radiation. The kidneys are generally well seen by a posterior or lateral approach in all but the largest of patients (Figure 9-10). The renal medulla is hypoechoic (darker) rela-tive to renal cortex and can be identified in some adults as cone-shaped central structures. In some patients, this corti-comedullary distinction is not visible and should not be con-sidered pathologic. The renal cortex is isoechoic or slightly hypoechoic compared with the echogenicity of the adjacent liver. Renal echogenicity exceeding that of the liver is abnor-mal and requires explanation. Most commonly, hyperechoic kidneys are the result of medical renal disease, such as end-stage hypertensive glomerulosclerosis. In addition to echogenicity and as with CT evaluation, the kidneys should be assessed for size, location, and symmetry. Scarring and masses can be evaluated. US assessment is often specific in identifying sim-ple or mildly complicated cysts and differentiating these lesions from a solid mass. Solid masses, however, remain nonspecific and generally require further evaluation. There are normal variants that can mimic mass lesions, including dromedary humps, as well as central prominences of normal renal tissue interposed between lobes referred to as persistent columns of Bertin. Additionally, the parenchyma near the renal hila may appear prominent as well, occasionally mim-icking a mass. Each of these variants may be distinguished by its normal echogenicity, lack of mass effect, and characteris-tic location. Occasionally, additional imaging with CT or MR may be required in equivocal masses. The renal sinus is the area engulfed by the kidney medially, harboring the renal pelvis, arteries, veins, nerves, and lymphatics that enter and exit the kidney, all contained within a variable amount of fat. Fat is typically brightly echogenic on ultrasound, and fat within the renal sinus dominates the ultrasonographic appear-ance, creating what is known as the “central echo complex.” The size of the central echo complex is variable, often more prominent in the elderly and minimal in the child. Absence of the central echo complex may suggest a mass such as a urothelial carcinoma replacing the normal fat. Alternatively, the complex may be very prominent in the benign condition of renal sinus lipomatosis. Calcifications often have a typical appearance on ultrasound, being brightly echogenic and re-sulting in shadowing posteriorly as the sound waves are at-tenuated. Renal stones or calcifications may be detected within the renal parenchyma or in the intrarenal collecting system. The echogenicity of the normal renal sinus, however, may be problematic by obscuring or mimicking small stones. Ultrasound is also excellent for detecting hydronephrosis, with the distended collecting system easily recognized within the central echo complex. The ureters are not normally seen on ultrasound because of obscuring overlying tissue and their small size. Evidence of their patency may be verified by Doppler detection of urine rapidly entering the bladder from the distal ureters that is, distal ureteral jets (Figure 9-11). The bladder is seen as a rounded or oval anechoic (fluid) structure in the pelvis. The bladder may demonstrate mass lesions, such as transitional-cell carcinoma, or stones. The urethra is not typically seen by ultrasound, although urethral diverticula may occasionally be demonstrated. 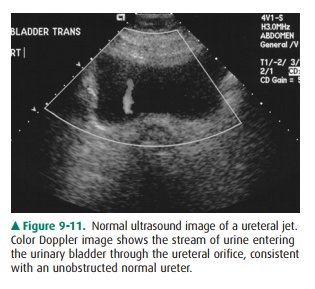