9-2. Regarding Case 9-2 (Figure 9-17), in a patient with a primary neoplasm elsewhere, the most common ad-renal mass is 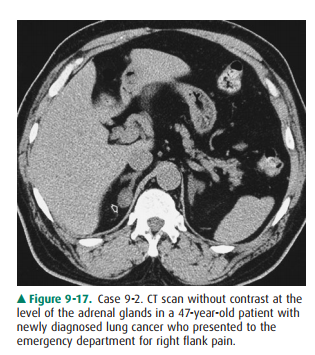 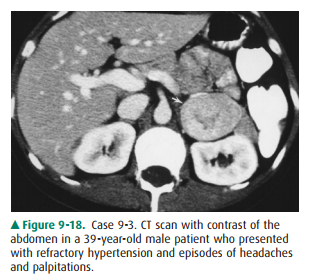 In Case 9-1 (Figure 9-16), a 10-cm mass in the left upper ab-domen contains areas of macroscopic fat. The mass lies just medial to the spleen and on coronal images is separated from the kidney by a plane of retroperitoneal fat (B is incorrect). Although subtle, the thin rim of tissue surrounding the lesion demarcates the mass and differentiates it from normal adjacent retroperitoneal fat. The fatty nature of the lesions is confirmed by the low-density tissue within the mass, similar to that of adjacent normal retroperitoneal and subcutaneous fat. Fat is rare within adrenal metastasis (A is incorrect). Although the retroperitoneal sarcoma is a differential consideration for a heterogenous retroperitoneal fatty mass, the location of the lesion and commonality of myelolipoma make adrenalmyelolipoma the most likely diagnosis (C is the correct answer to Question 9-1).

Regarding Case 9-2 (Figure 9-17), the diagnosis or exclusion of metastatic adrenal disease is one of the most important is-sues facing the radiologist in daily practice. The diagnosis of metastatic disease allows appropriate therapy for the patient including the possible prevention of unnecessary surgery. Perhaps more importantly, misdiagnosing a benign lesion as metastatic disease may mistakenly prevent potentially curative therapies such as surgery. In Case 9-2, there is a small 2-cm homogeneous mass arising from the medial limb of the adrenal gland. Recall that the density of a lesion can be quantitated on CT with Hounsfield unit measurements (although not shown, the Hounsfield unit measurements of the mass was 8 HU). Acute adrenal hematomas are high-density masses on non-contrast CT scan measuring between 50 and 90 Hounsfield units (D is incorrect). Adrenal carcinomas are typically large heterogeneous lesions and are quite rare (C is incorrect). The distinction between adrenal metastasis and adenoma is a crit-ical one. Although there can be overlap in their appearances, certain imaging characteristics of adrenal adenomas allow a confident diagnosis in the vast majority of cases, as we see later. Even with a known primary malignancy, however, statisti-cally the most likely etiology of a small adrenal mass is benign adrenal adenoma (B is the correct answer to Question 9-2). There are methods to more confidently differentiate ade-noma from metastasis which are covered later.

Case 9-3 (Figure 9-18) demonstrates a 4-cm solid appearing just anterior to the left kidney. Note the fat plane that clearly shows that the mass does not arise from the kidney. No specific characteristics such as fat are seen. The lesion is denser than sur-rounding muscle, making a cyst unlikely (C is incorrect). Adrenal lymphoma is typically bilateral, usually shows diffuseenlargement of the adrenal glands, and is typically accompa-nied by retroperitoneal adenopathy (D is incorrect). Although metastatic disease can have variable appearances and cannot be radiographically excluded, the lesion is also typical for a pheochromocytoma and, given the clinical history, this is the most likely diagnosis (A is the correct answer to Question 9-3).

The adrenal mass is a common problem for the radiologist and is being incidentally diagnosed with greater frequency with the increased utilization of cross-sectional imaging techniques, especially CT and MRI. In fact, the term “adrenal incidentaloma” has been coined for the small adrenal mass identified on imaging studies obtained for other reasons. Although there are many causes of adrenal masses, the most common include benign adenomas, metastatic disease, adre-nal carcinoma, and myelolipomas.

The most common adrenal mass is the adrenal adenoma. Although they can be hyperfunctioning and result in clinical syndromes, the majority of adrenal adenomas are nonhyper-functioning and are diagnosed incidentally. Distinguishing these “incidentalomas” from more significant pathology is critical. Fortunately, most adenomas have specific character-istics that allow a confident diagnosis. Many adenomas are similar to normal adrenal cortical tissue in that they contain a high proportion of cellular lipid material. This results in a low-density appearance and Hounsfield measurements on unenhanced CT that are highly specific for adenoma. Certain adenomas have a paucity of lipid, however, and may be oth-erwise differentiated from other masses by their enhance-ment characteristics. Specifically, contrast enhancement is rapidly lost in adenomas on delayed images, a phenomenon known as “washout.” MRI can be used to demonstrate lipid-rich adenomas by using special imaging sequences that reveal intracellular lipid. MRI is no better than CT for demonstrat-ing the characteristic washout of the adenoma. Given the widespread availability and reliability of CT, CT remains the primary modality for evaluating a nonspecific adrenal lesion.

The adrenal gland is a common site of metastatic disease, with breast and lung being the most common sources. The im-aging characteristics of metastatic disease are quite variable. Lesions may be unilateral or bilateral, homogeneous or hetero-geneous in appearance (Figure 9-19). The larger the metastatic lesion, generally, the more necrosis and hemorrhage and the more heterogeneous the lesion appears. Smaller lesions tend to be more uniform. Fortunately, unlike adenomas, metastatic disease does not contain high intracellular lipid and thus does not show the lipid-type imaging changes that characterize ade-nomas. However, metastatic disease can be indistinguishable from other adrenal pathology and histologic confirmation with biopsy may be necessary. 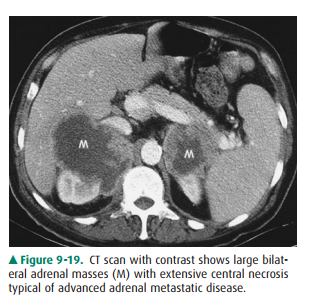 Pheochromocytomas are an unusual catecholamine-producing tumor arising from the sympathetic innervation of the adrenal gland most commonly originating in the adre-nal medulla, although in 10% of cases they may arise in an ex-traadrenal location. Most tumors arise sporadically, although a small percentage occur in certain syndromes. Most pheo-chromocytomas produce a constellation of symptoms referable to their catecholamine production, including hypertension and episodic headaches and palpitations. Most pheochromocy-tomas appear as a nonspecific adrenal mass on CT. Many of these lesions are fairly homogeneous solid masses. However, necrosis, calcification, and cystic formation all occur. On MRI, the diagnosis may be suggested by the fairly specific finding of very bright adrenal mass on T2-weighted images. Finally, MIBG, which collects in adrenal medullary-type tissue, can provide important information about these tumors. Although they may be used to confirm the diagnosis of a suspected ad-renal pheochromocytoma, a more important role for MIBG imaging is in the evaluation of metastatic disease or recurrent tumor, or for the localization of extraadrenal lesions. The MIBG scan typically shows a brightly intense area of activity at the site of the lesion (Figure 9-20). 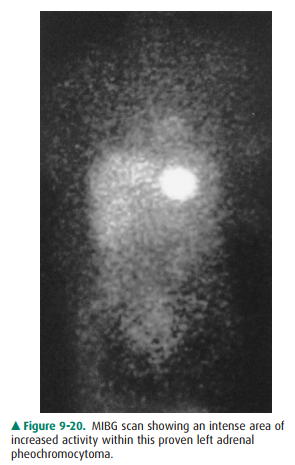