D.         A metastatic lesion from a distant primary malig-nancy. 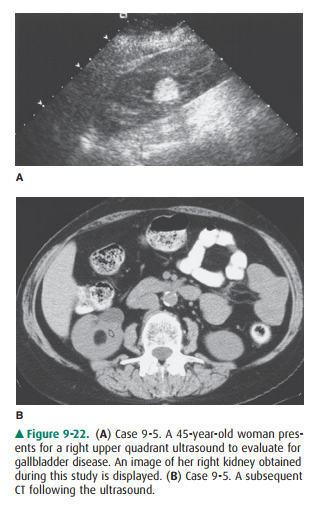 D.         The lesion shown is the most common malignant renal neoplasm. 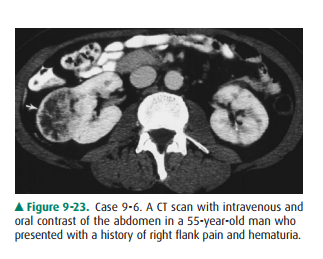 A.   This is the most common primary renal malig-nancy.

B.   This lesion is classically associated with the clini-cal triad of flank pain, hematuria, and a palpable mass.

D.   This lesion does not enhance with IV contrast. 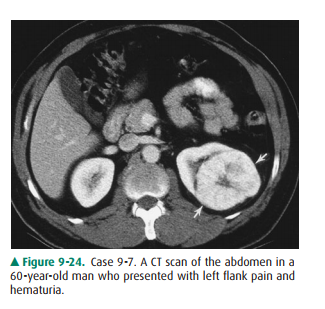 B.         By ultrasonographic characteristics

C.         These lesions cannot be distinguished by imaging.

Regarding Case 9-4 (Figure 9-21), the MRI images show a rounded, exophytic T2-intense lesion with heterogeneous in-ternal signal on T1 sequences. This appearance is highly sus-picious for renal cell carcinoma (B is the correct answer to Question 9-4). Patients with VHL (Von Hippel-Lindau) have a 70% risk of developing renal cell carcinoma by 60 years of age. This lesion clearly differs in signal characteristics fromnormal renal parenchyma (A is incorrect). Renal cysts would be homogenously T2 intense, with only thin septation at present, and would not demonstrate diffusely heterogeneous T1 signal (C is incorrect). A metastasis could imitate renal cell carcinoma (RCC) in signal, but would be less likely (D is incorrect).

In Case 9-5, the ultrasound image (Figure 9-22 A) reveals a hyperechoic lesion with echogenicity similar to that of adja-cent perirenal fat. However, this appearance on ultrasound is nonspecific and requires further evaluation, and a CT scan should generally be obtained. The CT results (Figure 9-22 B) show that this lesion (arrow) does indeed contain fat. The presence of definitive fat within a renal mass is virtually pathognomonic for the diagnosis of angiomyolipoma (AML), which is a benign lesion containing fat, blood vessels, and smooth muscle (D is the correct answer to Question 9-5).

For Case 9-6, the lesion seen (Figure 9-23) is an inho-mogenous soft-tissue mass (arrow) arising from the right kidney, which proved to be a renal cell carcinoma. It displays many of the common CT characteristics of RCC, including a somewhat rounded shape with irregular margins, enhance-ment with IV contrast material, and inhomogeneity (which can be due to hemorrhage, proteinaceous debris, and even calcifications). Renal cell carcinomas almost never contain fat (C is the correct answer to Question 9-6).

Regarding Case 9-7, the lesion has imaging and clinical characteristics indistinguishable from those of RCC. How-ever, the lesion (arrows) (Figure 9-24) is an oncocytoma, a benign tumor arising from the distal tubule or collecting ducts. Classically, oncocytoma is often associated with a characteristic central stellate scar. However, scarring can be seen in a RCC as well, and these lesions cannot be reliablydistinguished by imaging alone (C is the correct answer to Question 9-7).

These cases demonstrate examples of the most common renal masses, both benign and malignant. In general, all of these renal masses expand and displace normal renal parenchyma and nor-mal collecting-system structures. They are distinguished from infiltrating processes (such as infiltrating neoplasms, infections, and infarctions), which tend to preserve normal renal mor-phology. Expansile or exophytic renal masses may be seen by cross-sectional imaging and occasionally by conventional radi-ography if the mass is large. Imaging is used primarily to differ-entiate between those lesions that are clearly benign, those that are probably benign but require surveillance, and those that may be malignant and require tissue diagnosis.

The simple cyst is the most common renal mass, present in up to 50% of the population over the age of 50. They are almost always asymptomatic and discovered incidentally. Although they occasionally may become infected, hemor-rhage, or cause pain, their main importance lies in differenti-ating the lesions from renal tumors. Cysts can be single or multiple, unilateral or bilateral, and vary greatly in size. Pathologically they are thought to be acquired lesions arising from blocked collecting ducts or tubules. They have thin fi-brous capsules lined with epithelial cells and contain clear serous fluid. Only the largest of renal cysts may be evident on plain x-rays. On cross-sectional imaging modalities, cysts are sharply demarcated from adjacent parenchyma, homoge-nous in appearance, rounded with imperceptible walls, and do not enhance with the administration of contrast material. By ultrasound, a clearly anechoic lesion demonstrating en-hanced through-transmission of sound as well as the forego-ing criteria can be diagnosed as a simple cyst. On unenhanced CT, cysts measure near water density ( 10 HU). No mural nodularity or thick septation should be seen by CT. Internal hemorrhage often makes cysts appear complex, and in these cases, contrast must be administered to evaluate for enhancement that would indicate a mass. An exception is in homogenous lesions measuring greater than 70 HU in attenu-ation. Recent studies have indicated that these hyperdense le-sions almost always represent a hyperdense cyst. Lesions not fulfilling these criteria for cyst, such as those with thick enhanc-ing walls, those containing internal debris, or those with calcifi-cations, may represent cystic neoplasms and must be evaluated further by serial imaging and/or histological diagnosis.

Solid renal masses are of even greater concern. One such le-sion, the angiomyolipoma, is most easily distinguished from other renal masses by the presence of internal fat. These lesions are hamartomatous tumors of mesenchymal origin that are usually well differentiated and benign. In addition to fat, they contain sheets of smooth muscle and thick-walled blood ves-sels. Incidence is highest in middle-aged females. Although these are usually asymptomatic, they are predisposed to spon-taneous hemorrhage, especially when large. They can occur as sporadic solitary lesions or in association with tuberous sclero-sis, in which case multiple AMLs are often present. Twenty per-cent of patients with an AML will have tuberous sclerosis, and up to 80% of patients with tuberous sclerosis will have an AML. Macroscopic fat in a renal mass by CT is essentially diag-nostic of AML. Although these lesions are benign, they are often removed when greater than 4 to 5 cm because of the in-creased risk of hemorrhage, and for this reason smaller AMLs require follow-up to monitor the lesion for growth.

Another benign renal neoplasm that deserves comment is the oncocytoma, which originates from the epithelium of the distal tubules or collecting ducts. A central stellate scar is a characteristic, although nonspecific, pathologic feature of these lesions. They are typically asymptomatic and discov-ered incidentally, though they occasionally may be associated with a flank mass, pain, or hematuria. On cross-sectional im-aging studies, oncocytomas appear as a well-defined renal mass. The diagnosis of oncocytoma may be suggested by a central stellate scar. However, even when classic, the imaging characteristics described earlier cannot be used to reliably differentiate them from malignant renal cell carcinoma, and excision is generally indicated. Note that biopsy is usually not recommended because the cytologic appearance of oncocy-toma and renal cell carcinoma may be indistinguishable.

Renal cell carcinoma (RCC) is the most common primary renal malignancy, originating from the epithelium of the proximal tubule, having a male predominance and a peak in-cidence in adults in their 50s. Any renal mass lesion that can-not be definitively identified as one of the benign entities mentioned earlier must be assumed to be RCC until proven otherwise, most often by tissue diagnosis. Classically, RCC is associated with the clinical triad mentioned earlier of flank pain, a flank mass, and hematuria, although all three are pres-ent in less than 10% of cases. More commonly, these lesions are being discovered incidentally before symptoms have de-veloped. They may demonstrate calcifications in up to 30% of cases. On ultrasound, a nonspecific renal mass is seen. RCC may be hyperechoic and mimic AML or have central necrosis mimicking the central scar of oncocytomas. By CT, they tend to be rounded soft-tissue masses, enhancing after the administration of IV contrast. When small, they are often homogeneous, though when larger they are more heteroge-neous, frequently with necrosis and often with calcifications. One important role for imaging beyond detecting renal cell carcinoma is evaluating the extent of tumor spread. RCC can extend locally and invade adjacent soft tissues, especially when large and extensive. In addition, renal cell carcinoma has a propensity to spread into the renal veins and beyond, and the extent of this must be delineated prior to surgery. En-larged lymph nodes and spread to liver, lung, bones, and other areas, suggesting metastatic disease, should be sought. Surgi-cal excision is the treatment of choice for resectable lesions, making accurate staging to determine surgical candidacy all the more important.