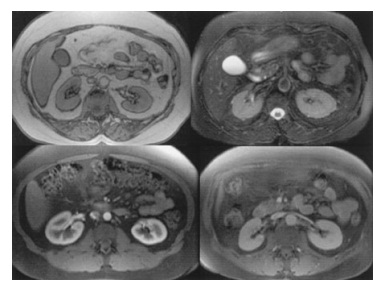 Just as with CT, technical advances in MR imaging have led to increasing use in urinary tract imaging.

Just as with CT, technical advances in MR imaging have led to increasing use in urinary tract imaging. Fast scanning tech-niques allowing breath-hold imaging, combined with the spectacular tissue contrast of MR imaging and the ability to directly image in any plane, make this an attractive modality for evaluating the urinary tract. Lack of ionizing radiation adds to its appeal, although cost, availability, claustrophobia, and the contraindication of certain materials including pace-makers remain major drawbacks. Finally, MR imaging of the kidney is performed with gadolinium as the contrast agent, not iodinated contrast material. The risk of contrast-induced nephropathy is minimal because of the very low concentrations of gadolinium chelate used in a typical MR study. A new phe-nomenon, however, has been described known as nephrogenic systemic fibrosis (NSF), which is a systemic disorder associated with significant morbidity and mortality, almost always seen in end-stage renal disease patients with a glomerular filtration rate (GFR) of less than 30 mL/min. Previously, MR was used as a primary modality in patients with renal insufficiency to avoid iodinated contrast nephropathy, but the advent of NSF as a clinical entity has contraindicated contrast-enhanced MR in these patients.

On MR imaging, the kidneys appear of variable signal in-tensity depending on the imaging factors, and as in CT, con-trast-enhanced phases of imaging (arterial, corticomedullary, nephrographic, and excretory) are all visible (Figure 9-12). Specific imaging sequences are designed to manipulate imag-ing factors to allow for optimum evaluation of the particular clinical concern. The ability to image in any plain is advanta-geous for MR imaging. The kidneys should be evaluated in a similar fashion to that of other modalities. Finally, the adre-nal glands are well seen by MRI, similar to CT; the normal shape is the same as described for CT, and the signal intensity depends on particular imaging parameters. The ureters and bladder can also be evaluated and are well depicted. 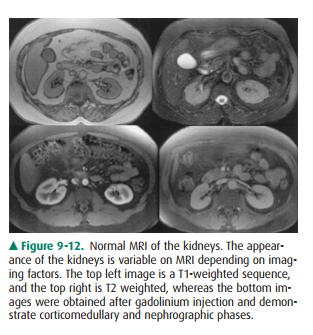 MR urography is an emerging modality that promises to offer, or perhaps exceed, many of the benefits of CT urogra-phy without the use of ionizing radiation or the need for con-trast administration (in some protocols). No consensus protocol for MR urography exists at this time. Many proto-cols, referred to as “static-fluid MRU,” use T2-weighted tech-niques only, analogous to MR cholangiopancreatography (MRCP). Techniques using IV gadolinium, “excretory MRU,” use multiphase T1 imaging in a manner similar to CT urography to evaluate the renal parenchyma and collecting system. Interpretation of the renal collecting system, ureters, and bladder with MR urography is similar to that ofCT urography. A major limitation of MR urography is the limited sensitivity for calculi relative to CT. MR urography is equally sensitive for congenital or acquired structural anom-alies. Relative sensitivity and specificity of MR versus CT urography for urothelial neoplasm is not well established. Al-though MR urography is proving effective for many of the in-dications of CT urography, the excellent availability, reproducibility, and performance of CTU as well as the cost, time, and insensitivity to stone disease has limited the utility of MRU.

Note should also be made of the developing use of MR in the staging of prostate cancer. MR of the prostate with the use of an endorectal coil is now in clinical use as a staging tool for diagnosed prostate cancer, assessing size of lesions, adenopathy, and involvement of other pelvic structures. Other benign prostatic processes mimic the signal character-istics of carcinoma, limiting the specificity of MR for screen-ing and initial diagnosis. Correlation of MRI findings with prostate-specific antigen levels and with MR spectroscopy yields higher specificities; however, in clinical practice sono-graphically guided transrectal biopsy remains the standard of care for initial diagnosis.