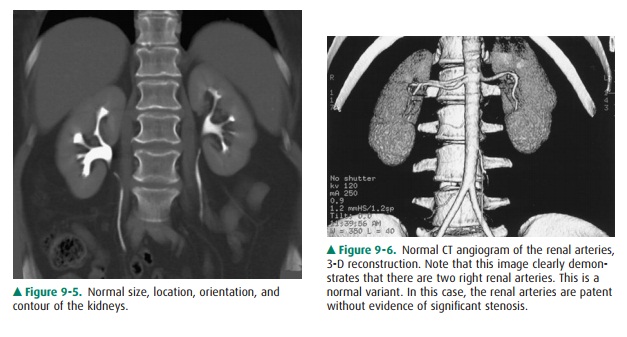 Multidetector (spiral) CT is now the dominant radiologic imaging modality for evaluation of the urinary tract and adrenal glands.

Multidetector (spiral) CT is now the dominant radiologic imaging modality for evaluation of the urinary tract and ad-renal glands. Several factors make CT quite effective. The high contrast and spatial resolution afforded by CT allow de-tection and evaluation of subtle differences in very small structures. Mathematical calculations of the attenuation of the CT x-ray beam allow quantitative evaluation of the rela-tive density of structures (ie, their Hounsfield units) and by using these “CT numbers,” much unique diagnostic informa-tion on the urinary tract is gained. Examinations can be per-formed quickly and reproducibly with thin CT slices of the entire urinary tract now obtainable in just a few seconds. With these advances, CT can now be used to evaluate much of the urinary tract, including vascular, parenchymal, and urothelial components as well as adjacent structures including the adrenal glands.

Careful techniques and protocols are critical to CT accu-racy. CT scans of the urinary tract may be performed with and/or without intravenous iodinated contrast material de-pending on the indications. CT performed without contrast is typically used for the detection of renal or ureteral calculi, for which it is exquisitely sensitive. Additionally, noncontrast views of the kidneys serve as a baseline to evaluate for lesion enhancement after contrast administration, a critical factor in mass evaluation. Intravenously administered iodinated contrast is excreted by the kidney primarily by glomerular fil-tration, opacifying the urinary tract progressively from thekidney through the ureter and to the bladder. Contrast “opacification” during CT is most accurate, exquisitely demon-strating and evaluating the urinary tract. One of the major advances in the past 5 to 10 years has been advent of CT urography (CTU), a superior replacement of the IVP. CTU is most often indicated for evaluation of hematuria and typi-cally consists of three scanning phases—noncontrast, nephrographic (90 seconds), and delayed (8 to 10 minutes) excretory phase. The noncontrast phase allows for stone de-tection and serves as a baseline to assess possible mass en-hancement. The nephrographic phase is predominately used to evaluate the kidneys for mass lesions. Finally, the excretoryphase allows assessment of the collecting system, particularly for the detection of urothelial carcinoma (Figure 9-2). Fre-quently, the axial CT images are augmented with multiplanar and three-dimensional reconstructions (Figure 9-3). 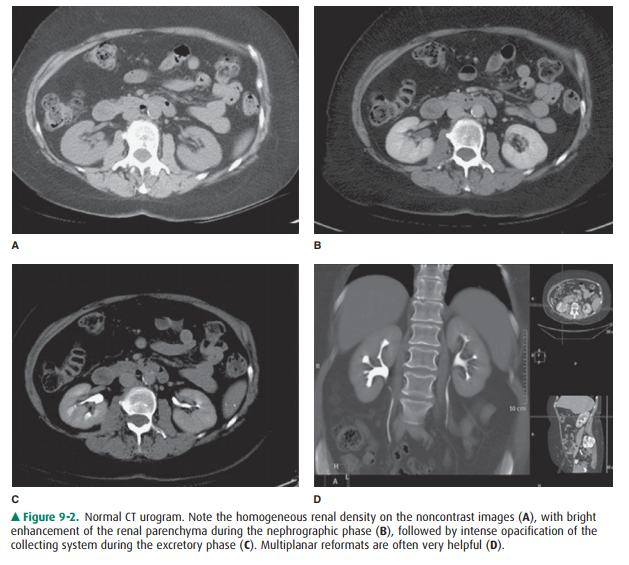 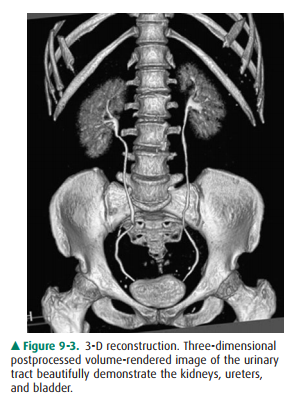 The kidneys, which enclose the renal sinus and are sur-rounded by retroperitoneal fat, are well delineated on CT. The renal parenchyma is composed of outer cortex, contain-ing much of the nephron, as well as the pyramid-shaped col-lecting duct containing inner medulla. On noncontrast examinations, the kidneys are homogeneous and have a den-sity similar to most soft tissue (Figure 9-4 A). With rapid scanning after contrast administration, several sequentialphases of opacification within the kidney can be delineated by CT including the corticomedullary, nephrographic, and excretory phases. The corticomedullary phase can be seen if scanning is performed during the first 20 to 70 seconds after contrast administration and represents the early preferential blood flow to the renal cortex (Figure 9-4 B). Subsequently, contrast begins to pass into the distal collecting tubules within the renal medulla, resulting in a more homogeneous opacification of the renal parenchyma termed the CT nephrographic phase (Figure 9-4 C). This generally occurs around 90 to 120 seconds after contrast medium injection. Finally, the excretory phase is seen when contrast opacifies the collecting system. Each different phase of opacification may better demonstrate different disease processes, and thus various scanning protocols are used to evaluate the kidneys depending on the clinical indication. 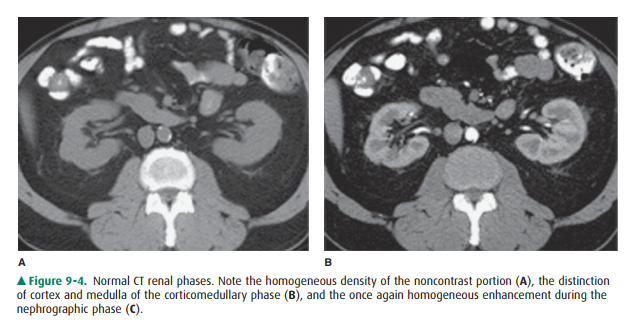 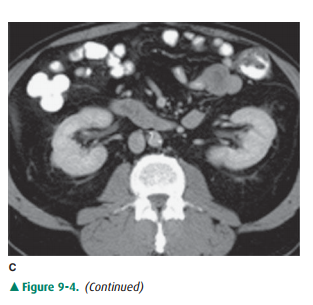 On CT, the kidneys should be evaluated for size, location, orientation, and contour (Figure 9-5). The kidneys are typi-cally located at the level of the upper lumbar spine with the right kidney slightly lower than the left. They generally lie with their axes along the psoas muscles with the upper pole slightly more medial than the lower pole. Alterations in position and orientation of the kidneys may be related to congenital anomalies such as pelvic kidneys or may be sec-ondary to mass effect from an adjacent lesion. The size of the kidneys is somewhat variable depending on the age, sex, and size of the patient, but generally range from 11 to 14 cm. Al-though the right is often slightly smaller than the left, the kid-neys should be relatively symmetric in size, with a discrepancygreater than 2 cm suggesting pathology. There are a number of causes of abnormal renal size, ranging from incidental anomalies such as congenital renal hypoplasia to clinically significant conditions such as renal artery stenosis (small kid-ney) or infiltrating renal neoplasm (large kidney). The kid-neys should have a reniform shape and a smooth contour. Clefts suggest scarring, which most often results from chronic vesicoureteral reflux/chronic bacterial pyelonephritis or fromrenal infarcts. Additionally, the kidneys should be evaluated for calcifications, hydronephrosis, and inflammation. A criti-cal role for CT is mass/cyst detection and characterization. CT is very specific in identifying a lesion as a simple cyst when the lesion is homogenous and of water density, typi-cally 10 HU. Lesions of higher density may represent hy-perdense (complex) cysts or solid masses, and further evaluation with contrast CT to detect enhancement may be needed to differentiate these causes. Fat within a solid mass generally allows a confident diagnosis of angiomyolipoma. A solid, non-fat-containing mass in the adult should be consid-ered a renal cell carcinoma until proven otherwise. CT is also useful in staging renal neoplasms. Non-neoplastic renal dis-ease, such as trauma and complicated infections, is accurately demonstrated on CT, providing specific information regard-ing the extent and severity of the process. The remainder of the retroperitoneum, containing fat, the normal occupants of the retroperitoneum (kidneys, adrenal glands, pancreas, duo-denum, and parts of the colon), and vascular structures, is well seen by CT, and diseases such as inflammation, infection, and neoplasms are readily demonstrated. Additionally, the thin section and rapid imaging of modern CT also allows noninvasive evaluation of the vascular system, including the major renal arterial and venous structures (Figure 9-6). 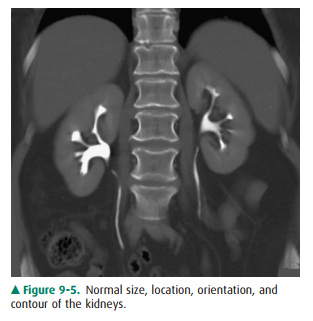 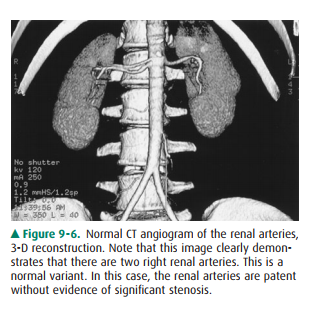 As previously mentioned, the unenhanced CT of the uri-nary system, commonly referred to as the urinary tract CT or “stone study,” is the procedure of choice for the detection of urolithiasis and associated obstruction, with unmatched specificity and sensitivity. There are many other advantagesto using CT to evaluate suspected ureteral stones, including speed of the examination, identification of alternative expla-nations for the pain (appendicitis, diverticulitis, aneurysm, etc), and elimination of intravenous contrast complications. Scans no thicker than 5 mm are performed from the top of the kidneys to the symphysis pubis. The ureter can be visual-ized and followed from the renal pelvis to the bladder in most cases and appears as a tubular 2- to 3-mm fluid structure sur-rounded by retroperitoneal fat. Stones can be diagnosed by their high density and location within the ureter. Secondary signs of obstruction have been described, including dilation of the proximal ureter. As on the KUB, phleboliths can prove troubling because of their frequent close approximation with the distal ureter; however, their central lucency, lack of sur-rounding inflamed ureteral wall, and lack of secondary signs of obstruction usually allow their distinction.

Although visible without contrast material, the intrarenal collecting system, ureters, and bladder are conspicuous and nicely demonstrated when contrast material has been admin-istered and delayed images obtained. Collecting system anatomy is now visible in fine detail with the use of modern high-resolution ( 1 mm) spiral CT and multiplanar (coro-nal, sagittal) and three-dimensional reformat methods. The intrarenal collecting system consists of calyces, infundibula, and the renal pelvis. Normally, each kidney consists of 7 to 14 evenly distributed calyces (Figure 9-7). The individual renal calyx, from the Latin for “chalice,” is a delicate-appearing cup-shaped structure. Not uncommonly, partial fusion of the calyces occurs, especially in the renal poles, creating the com-pound calyx. Other calyceal variants occur, including vari-ants of number (polycalycosis, unicalyx kidney) and size (megacalycosis, microcalyx) and must be differentiated from true pathology. The normal delicate, cuplike appearance can be distorted or irregular in conditions such as papillary necrosis, tuberculosis, or urothelial (transitional cell) carci-noma. Diverticula may arise from the calyces creating a haven for stone formation, recurrent infection, or even transitional-cell malignancy. The renal pelvis is also quite variable in ap-pearance. A common variation is the so-called extrarenal pelvis, where the pelvis lies outside the renal sinus. In this set-ting, the pelvis tends to be more prominent and rounded, mimicking hydronephrosis. This can be differentiated from true obstruction by normal-appearing calyces. The ureters appear as contrast-containing, rounded structures in the retroperitoneum (Figure 9-8). Because of peristalsis, portions of the ureters may be collapsed. On CT, the bladder appears as a rounded water or contrast density structure in the pelvis. Detection of malignancy arising from the urinary tract epithe-lium is a major concern, particularly with the advent of CT urography. Urothelial neoplasia generally appears as papillary solid lesions arising from the urothelial mucosa. Occasionally, urothelial neoplasm may appear as a more flat area of mucosal thickening. The urethra is not normally seen on CT. 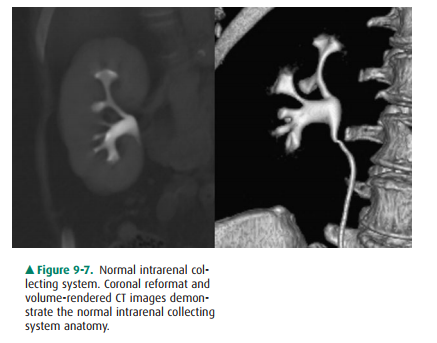 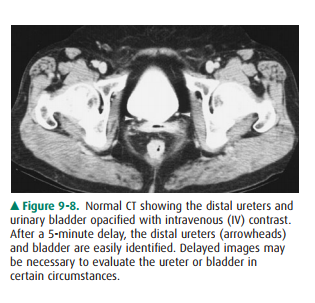 The adrenal glands are well seen on CT, appearing as linear, arrowhead, or inverted Y-shaped structures usually consisting of body and medial and lateral limbs (Figure 9-9). The adrenal glands are normally less than 1 cm in thickness and 3 to 4 cmin length. They lie cephalad to the kidneys, with the right just posterior to the inferior vena cava (IVC) and the left antero-medial to the upper pole of the left kidney. Note that the em-bryological and functionally distinct outer cortex and inner medulla are not visibly separable. Although occasionally af-fected by trauma or infection, the adrenal mass evokes the most attention, and for this CT evaluation is well suited. 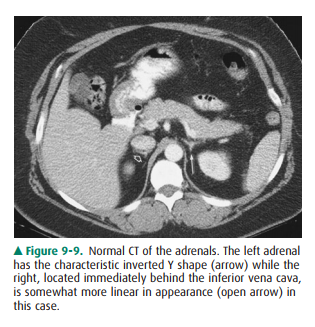