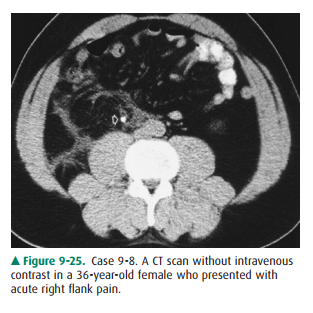 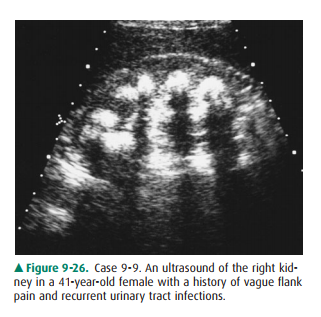 Case 9-8 (Figure 9-25) is a CT scan of the abdomen obtained without intravenous contrast. Stranding in the fat planes can be seen on the right in the retroperitoneum. Stranding within the fat planes on a CT is a nonspecific finding resulting from many conditions. In general, the stranding can be related to inflammation such as recent surgery, infection, or abnormal fluid collections such as blood or urine. Thus, the stranding seen in this case could result from any of the three listed pos-sible answers. However, within the right ureter is a high-density rounded structure (arrow) consistent with a ureteral calculus (B is the correct answer to Question 9-8). Two main parame ters that should be noted are the size and location of a stone, as these two factors are directly related to the likelihood of stone passage. Additionally, once the diagnosis of a ureteral stone is made, the radiologist must continue to evaluate the remainder of the scan, because additional abnormalities may also exist.

In Case 9-9, a renal ultrasound (Figure 9-26) demon-strates rounded highly echogenic areas throughout the central parenchyma of the kidney. Several important additional obser-vations include strong uniform shadowing posteriorly from the echogenic areas consistent with sound attenuation and suggesting calcification. Although attenuation of the ultra-sound beam occurs with air, such as might occur with emphy-sematous pyelonephritis, the shadowing in those cases is often “dirty” in appearance, being somewhat inhomogeneous (D is incorrect). Also, the calcifications are located in the medullary area of the kidney, unlike the cortical location of cortical nephrocalcinosis (A is correct answer to Question 9-9).

Nephrolithiasis (better known as “kidney stones”) is much more common than nephrocalcinosis. In fact, urinary tract calculi occur in as many as 12% of the population of the United States. Although there are clearly definable causes in some cases (hereditary conditions, metabolic diseases such as gout, certain urinary tract infections, and predisposing anatomic conditions), the vast majority of patients have idiopathic stone disease. Many small stones that are located within the intrarenal collecting system are asymptomatic; however, stones that pass into the ureter (ureterolithiasis) may obstruct the urinary tract and result in excruciating pain. Additionally, stones may cause hematuria or be a nidus for recurrent infection. Conventional radiographs have long been used to evaluate stone disease; in fact, the first descrip-tion of urinary calculi was in April 1896, only a few months after the discovery of the x-ray by Roentgen. Stones appear as calcific densities on x-rays overlying the urinary tract (Figure 9-27). Urinary tract calculi are variably opaque and visible depending on their size, composition, and location. The ac-curacy of conventional radiographs for detecting stones has long been overestimated. Perhaps only 50% of stones are identified prospectively, and one can never be certain that an individual calcification on an isolated plain radiograph is within the urinary tract or simply overlies it. Confusing calci-fications are many, including phleboliths, arterial calcifica-tions, calcified lymph nodes, and other calcified masses. Stones on ultrasound appear as brightly echogenic structures and often with posterior shadowing. However, not all stones shadow, and as there are many small noncalcific echogenicfoci (vessels, fat) normally within the kidney, the accuracy for detecting renal calculi is only moderate with ultrasound. Additionally, ultrasound suffers from its ability to visualize only the most proximal and distal ureters and must rely on nonspecific indirect signs such as hydronephrosis and absent ureteral jets to suggest ureteral stones and obstruction. CT is now the imaging examination of choice for evaluation of renal stone disease. Virtually all urinary tract stones are dense on CT and show up as bright foci. Even stones as small as 1 mm are visible with modern scanners. Additionally, the en-tire urinary tract can be visualized on CT without overlap-ping or obscuring structures. In patients who present acutely with flank pain and are suspected of having ureteral stones, CT has become the study of choice. The diagnosis is con-firmed by directly identifying a stone within the ureter. Sec-ondary findings of obstructing may also be identified on CT, helping to confirm the diagnosis. Renal enlargement, perinephric stranding, and dilation of the ureter and in-trarenal collecting system are frequently present in ureteral obstruction. One major additional advantage to CT is the ability to identify alternative explanations for the cause of a patient’s acute flank pain. In fact, as many as one-third of all patients originally felt to have ureteral stones are shown byCT to have an alternative diagnosis (Figure 9-28). At this point, MRI performs little role in the evaluation of stone disease. 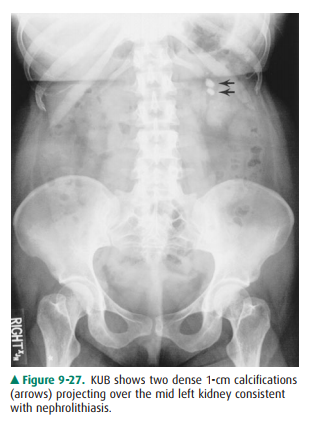 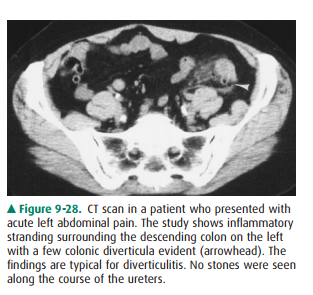 In pregnant patients with suspected obstructing calculi, CT is not contraindicated. By using a low-dose CT technique with lowered tube current and increased pitch, fetal dose can be lowered to as little as 3 mGy. This is well below the thresh-old for fetal anomalies of 50 mGy, and below the threshold for increased risk of childhood malignancy of 10 mGy. A sim-ilar technique can also be used in other situations where low dose is desired, such as in patients who have multiple scansfor recurrent calculi. It should be remembered that the lowest exposure achievable should always be pursued, and these studies should only be used in situations where they will af-fect clinical decision making.

Bladder stones may occur secondary to transport from the ureter or arise de novo. Most cases of bladder stones are secondary to urinary stasis such as occurs with bladder outlet obstruction from neurogenic bladders or prostatic enlarge-ment. The diagnosis of bladder stones is similar to those in the upper urinary tract. Finally, urethral stones occur, and in males the vast majority are present as a result of passage from the bladder or above. In women, urethral stones are most fre-quently the result of urethral diverticula, which result in uri-nary stasis and stone formation.