Direct injection of water-soluble iodinated contrast material is a useful method of examining various regions of the urinary tract.

Direct injection of water-soluble iodinated contrast material is a useful method of examining various regions of the uri-nary tract. The advantage of this method of evaluation is the direct control over the contrast injection rather than reliance on secondary excretion from the kidney.

Retrograde pyelography, often carried out in conjunction with cystoscopy, is performed by placing a small catheter into the distal ureter. Contrast material is then injected through this catheter into one or both ureters. Fluoroscopy and conven-tional radiographs should then be obtained. This study usually results in excellent evaluation of the ureter and intrarenal col-lecting system. The ureter is typically seen in its entirety, which rarely occurs with other imaging studies. Interpretation is sim-ilar to that of CT urography, with the caveat that the contrast within the collecting system is under greater pressure than physiologic conditions and mild ballooning of the calyces as well as occasional extravasation can occur normally.

Imaging of the bladder is performed with a cystogram, where a catheter is placed into the bladder and contrast ma-terial is then injected. The contrast material is optimally in-jected under fluoroscopic observation but occasionally is performed with only static conventional radiographs, such as in the trauma setting. One advantage to cystography is that vesicoureteral reflux can be evaluated during the conventional cystogram. The urethra may be evaluated with contrast material via two methods. In one, the urethra is evaluated during voiding, often following a cystogram (voiding cys-tourethrogram or VCUG). Alternatively, a retrograde study may be performed (retrograde urethrogram). The urethra in the male consists of four portions, including the prostatic, membranous, bulbous, and penile portions. During voiding, the urethra is fairly uniformly distended and tubular in ap-pearance. On a retrograde study, the more posterior urethra (prostatic and membranous) is often contracted and seen as a thin wisp of contrast. The female urethra appears as a short, slightly funnel-shaped tubular structure during voiding (Figure 9-14). The urethra in males is generally evaluated for injuries and strictures but may also be examined for filling defects, masses, and fistulas. 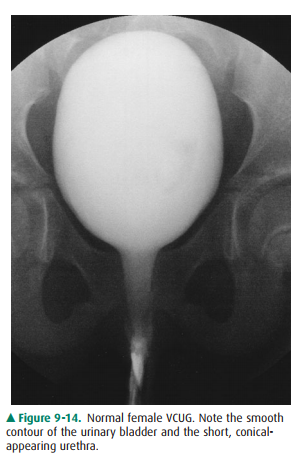