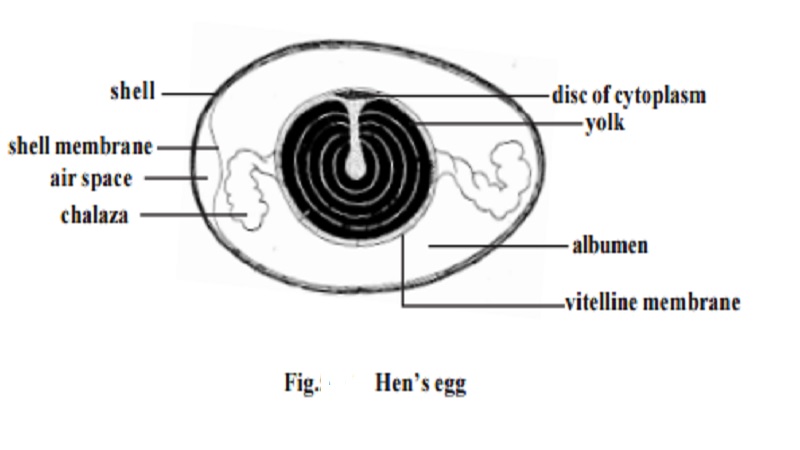 For the embryo to develop inside a fertilised egg nutrition is needed. The amount of food needed varies for different organisms. It normally depends on the duration of development. Food is provided in the form of yolk. It may be ' fatty yolk' or protein yolk'.

For the embryo to develop inside a fertilised egg nutrition is needed. The amount of food needed varies for different organisms. It normally depends on the duration of development. Food is provided in the form of yolk. It may be ' fatty yolk' or protein yolk'. It is provided by the ovary during differentiation of the egg. Due to accumulation of yolk a maturing egg rapidly increases in size. In amphibian eggs yolk occurs in the form of large granules, called yolk platelets. Chemically, the yolk platelets contain two main pro-teinaceous substances namely phosvitin and lipovitellin.

The eggs can be classified based on amount and distribution of yolk.

Amount of yolk and egg types :

In certain animals the developmental stages are not very elaborate. The final 'young one' born may be very simple in structure and organization. Such conditions remain in animals like Hydra, Sea urchin, Amphioxus and Placental mammals. In the eggs of such organisms due to brevity of the growth period the amount of yolk is much reduced. Such eggs are said to be Microlecithal or oligolecithal.

In certain other animals the eggs need to release young ones in a more self supportive condition. Hence for such eggs the amount of yolk is consider-able in quantity. Such eggs with moderate amount of yolk are called meso-lecithal eggs. Such eggs are produced by annelid worms, molluscs and am-phibians.

In some animals the growth and differentiation of the embryo is much more elaborate. The growth period is sufficiently long. Hence for supporting the embryo in development the eggs contain large quantity of yolk. Such eggs are termed as Megalecithal or Macrolecithal eggs. The eggs of reptiles and birds are considered as macrolecithal. Further these eggs are covered by a calcareous shell. It is a protective structure for laying the eggs on lands. Such eggs are called cleidoic eggs or land eggs.

The pattern of cleavage and the consequent gastrulation processes are affected by the distribution of yolk within the egg. According to the pat-tern of dispersal of yolk the following egg types had been identified.

Eggs of this type have the yolk disbursed in the entire cytoplasm. The distribution is somewhat uniform in animal, vegetal poles and the equatorial

region. In such eggs the cleavage will be deeper and may bisect the eggs connecting the two poles. All microlecithal eggs have this nature.