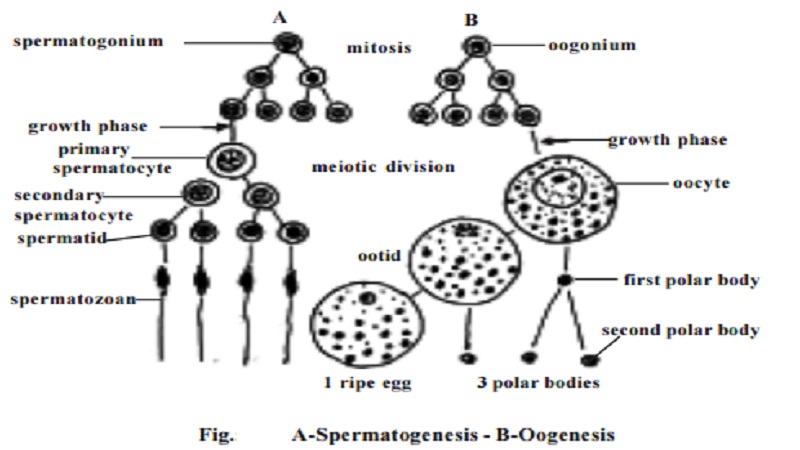 The process of sexual reproduction ensures the formation of a diploid zygote which could constitute the next generation. A zygote is a single celled structure. By an ontogenetic process the zygote undergoes various develop-mental phases resulting in multicellular embryonic organisation.

The process of sexual reproduction ensures the formation of a diploid zygote which could constitute the next generation. A zygote is a single celled structure. By an ontogenetic process the zygote undergoes various develop-mental phases resulting in multicellular embryonic organisation. These phases include cleavage, gastrulation,neurulation, organogenesis and the pe-riod of growth and histological differentiation. Inspite of the fact that or-ganisms vary in their structure, form and mode of life, the processes of embryogenesis, development and differention are remarakably similar in all metazoans. Till later stages of development a fundamental uniform pattern in development can be observed. The ontogenetic stages also reflect the historical development of species or phylogenetic development.

Realising the mode of formation of a young individual of the next gen-eration has always interested human mind. There is a recorded history of human natural curiosity in sexual reproduction from very early period. The ' Susruta samhita', a monumental Indian medical book, written during second or third century A.D., describes the development of a human child in the mother's womb.

The earliest recorded work had been done by Aristotle (384-322 BC). His classical work De Generatione Animalium is concerned with the gen-eration of animals. It describes the reproduction and development of many kinds of animals. In his another work ' De Historia Animalaium', Aristotle provides an account of the development of the hen's egg. He compared reproductive methods of different animals and provided a classification based on that. By observing the development of hen's egg he concluded that the development always proceeds from simple formless beginning to the complex organization of the adult. For this speculative idea he provided the name epigenesis. Through his remarkable observation and speculations Aritotle established ' embryology' as an independent field in science. Thus to-day he is regarded as the founder of the science of embryology.

After the period of early Greek thinkers this discipline once again got the attention of the scientists from the beginning of the 17th century. Through the contributions made by various workers like Von Baer , E. Haeckel, O. Hertwig, E.B Wilson, Spemann, C.M Child, Maclean and others rapid advancements were being made in the understanding of de velopmental processes in animals. Modern embryology has utilised all tools made available from other branches of science and diversified into branches such as ' Experimental embryology' , ' Chemical embryology', ' Compara-tive embryology' and Descriptive embryology. Such studies have paved the way for meeting the challanges of to-day's world through works on clon-ing techniques, tissue culture, stem cell researches, ' in vitro' fertilisation, organ transplantations, regeneration, tissue grafting and other medical and non-medical fields.

The process of embryonic development in sexually reproducing multicellular organisms is made possible through processes of gametogenesis and fertilization. Gametogenesis is the formation of sex cells or reproductive cells or gametes. It happens in primary sex organs called gonads. The male and female gonads, namely the testis and ovary contain primordial germ cells. These cells are responsible for the production of gametes.

In the testis of vertebrates the specialised tissue for the process of spermatogenesis are located in the seminiferous tubules. The primordial germ cells of these tubules produce cells which ultimately become sperm mother cells or spermatogonia. Through a growth phase the speramtogonia get converted into primary spermatocytes. These are diploid cells. They undergo meiotic cell division. Initially the I Meiosis results in the formation of secondary spermatocytes. Through II Meiosis they form spermatids. The spermatids are haploid in nature. By a process of spermiogenesis or spermioteliosis they get differentiated into specialized cells called spermatozoa.

A similar process happens inside the female gonad, namely the ovary for the production of Ova. This process that happens in the primordial germ cell of the ovary passes through stages of primary oogonia, primary oocyte and secondary oocyte. These stages are conducted by meiotic cell divisions. Thus the final product, namely the ovum is a haploid female reproductive cell.

Embryogenesis could occur only after the fertilization of the ovum or egg. Fertilization provides the diploid nature to the cell. Thus all the somatic cells of the embryo will remain diploid. Further, the process of fertilization triggers or initiates the initial stages of embryogenesis. During the process of fertilization the sperm and ovum of the same species approach and come in contact with each other. The entry of sperm initiates further changes in the egg. The haploid nuclei of the sperm and ovum fuse, resulting in the formation of a diploid zygote nucleus. This process of nuclear fusion is known as syn-gamy or amphimixis.