Phylum Chordata and Diversity and General Characters of Chordates 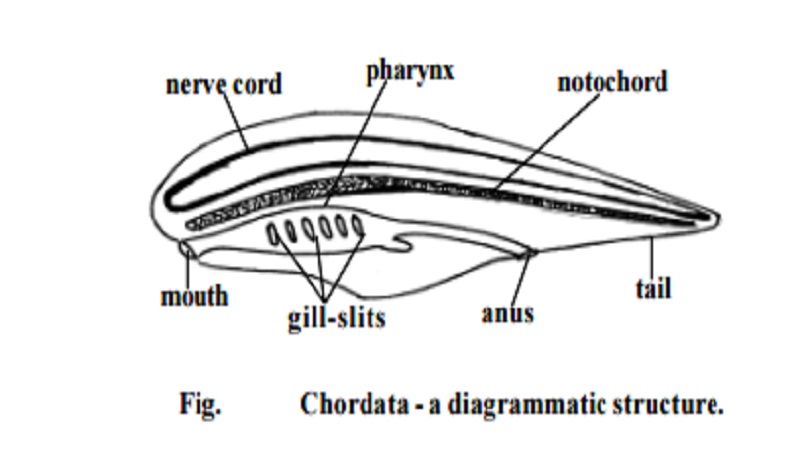 The backboned animals (vertebrates), together with a few closely re-lated animals which do not possess a backbone, are included in this phylum. Most of the living chordates are familiar vertebrate animals. The chordates are of primary interest because human beings are members of this group.

The chordates exhibit an astonishing diversity in form, physiology and habits. The number of chordate species is limited. About 49,000 species are on record which are only half of the living species of molluscs and less than one tenth of arthropods. Despite their modest number of species, the chor-dates make remarkable contribution to the bio-mass of the earth. Nearly all of them are medium to large in size. The vertebrates in particular are consider-ably larger and many of them are among the largest of living animals. The gigantic blue whale which is 35 meters long and 120 tons in weight is the biggest known animal. The smallest vertebrate , philippine goby is a fish, measuring only 10 mm in length. The chordates are able to occupy various kinds of habitats. They have adapted themselves to more modes of existence than any other group. They are found in the sea, in freshwater, in the air and on all parts of land from the poles to the equator.

The three distinctive characteristics of the chordates are the presence of notochord, dorsal tubular nerve cord and pharyngeal gill slits.

During the embryonic development of a chordate there appears a sup-porting rod called the notochord. It lies dorsal to the alimentary canal and ventral to the nerve cord. In some chordates this structure persists throughout life. In others it is partially or completely replaced by a ' backbone'. It is made up of separate bony elements or vertebrae.Structurally it is com-posed of large number of specialized vacuolated cells. It is surrounded by fibrous and elastic sheath. The stiffness of the notochord is due to the tur-gidity of fluid-filled cells and surrounding connective tissue sheath.

The nerve cord lies just above the notochord and remains entirely out-side the coelom. It is a tubular structure having a small hollow canal running from one end to the other. The dorsal hollow nerve cord persits throughout the adult life of almost all chordates.

These are paired lateral clefts leading from the pharynx to the exte-rior. They are present throughout life in fishes and a few tailed amphibians. In amphibians, like frogs and toads it is found only in the larval stages. In higher vertebrates (reptiles, birds and mammals) they are embryonic and non-func-tional.

The heart is chambered. It is located ventral to the alimentary canal.

In chordates, the blood passes through a continuous system of tubes namely arteries, capillaries and veins.