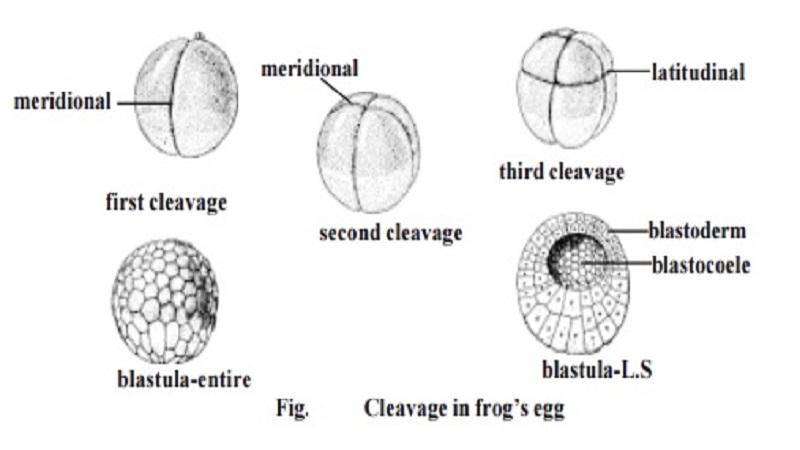 The process of cleavage or cellulation happens through repeated mi-totic divisions. These divisions result in cells called blastomeres. In later stages of development the blastomeres occupy different regions and differen-tiate into several types of body cells.

The first cleavage of frog's egg was observed by Swammerdam in 1738. The entire process of cleavage in frog's egg was studied by Prevost and Dumas in 1824. With the development of microscopes cleavages and further stages were observed in the eggs of sea urchin, star fishes, amphioxus and hen's eggs.

The planes of cleavage

An egg can be divided from different planes during cleavage. De-pending on the position of the cleavage furrow the planes of cleavage are named.

1. Meridional cleavage: The plane of cleavage lies on the animal vegetal axis. It bisects both the poles of the egg. Thus the egg is divided into two equal halves.

2.    Vertical cleavage: The cleavage furrows may lie on either side of the meridional plane. The furrows pass from animal to vegital pole. The cleaved cells may be unequal in size.

3.  Equatorial cleavage: This cleavage plane bisects the egg at right angles to the main axis. It lies on the equatorial plane. It divides the egg into two halves.

4.  Latitudinal cleavage: It is similar to the equatorial plane, but it lies on either side of the equator. It is also called as transverse or horizontal cleavage.

Influence of yolk on cleavage

Yolk is needed for embryonic development. However the fertilized egg has to undergo all stages of development and result in a suitable 'young form' initiating next generation. Somehow with all the influences of yolk the developmental procedures are so adapted and modified that a well formed embryo will result. The initial influence of yolk is felt during the process of cleavage.

The amount of the yolk and its distribution affect the process of cleav-age. Accordingly several cleavage patterns have been recognised.

1. Total or holoblastic cleavage - In this type the cleavage furrow bisects the entire egg. Such a cleavage may be either equal or unequal.

(a)  Equal holoblastic cleavage - In microlecithal and isolecithal eggs, cleav-age leads to the formation of blastomeres of equal size. Eg: Amphioxus and placental mammals.

(b)   Unequal holoblastic cleavage - In mesolecithal and telolocithal eggs, cleavage leads to the formation of blastomeres of unequal size. Among the blastomeres there are many small sized micromeres and a few large sized macromeres.

(a) Discoidal cleavage - Since the macrolecithal eggs contain plenty of yolk, the cytoplasm is restricted to the narrow region in the animal pole. Hence cleavage furrows can be formed only in the disc-like animal pole region. Such a cleavage is called discoidal meroblastic cleavage. Eg: birds and reptiles.

Superficial cleavage - In centrolecithal eggs, the cleavage is restricted to the peripheral cytoplasm of the egg. Eg: insects.

Apparently there are several cleavage patterns. However, all cleav-ages follow a common procedure. The cleavages are governed by certain basic principles or laws.

1. Sach's laws - These laws were proposed by Sach in 1877. i) Cells tend to divide into equal daughter cells

2. Balfour's law (Balfour 1885) - 'The speed or rate of cleavage in any region of egg is inversely proportional to the amount of yolk it contains'.

Cleavage of fertilized egg in Frog.

In frog's egg the cleavage is holoblastic and unequal. The cleavage occurs as follows.

1.   The first cleavage plane is meridional. Initially, a furrow appears at the animal pole. It gradually extends towards the vegetal pole of the egg. It cuts the egg through its median animal-vegetal polar axis and results in two equal-sized blastomeres.

3.   In the next stage a latitudinal furrow is formed above the horizontal fur-row nearer to the animal pole. Such a furrow is due to the influence of yolk concentration in the vegetal pole. The latitudinal furrow uniformly affects all the blastomeres. It results in the formation of eight blastomeres. Four of them remaining in the vegetal pole are large. They are named as macromeres.

Another four blastomeres remain in the vegetal pole. They are named as micromeres. The micromeres are smaller in size than the macromeres.

4.  The fourth set of cleavage planes are meridional and holoblastic. They are unequal. They divide yolkless micromeres more rapidly than yolk-rich mac-romeres. These cleavages result in the production of 16 blastomeres.

5. As a result of further cleavages, a ball of several small blastomeres result. A closer observation reveals that, while the blastomeres above the equator are small and remain as micromeres, the blastomeres of the vegetal pole re-main progressively larger. The larger blastomeres are called the macromeres.

It has been reported that around 12th cleavage the blastula possesses about 4096 cells. The blastula moves to the next stage, namely gastrulation at a stage in which it has about 20,000 cells.

The ultimate blastula is a ball of blastomeres which have to form dif-ferent embryonic body layers and organs of the body. The fate of each and every blastomere has been observed and marked. A map showing various

organ forming, areas on the blastula is called the ' fate map'. This map shows prospective ectoderm, mesoderm and endodermal areas. It also shows the ' zone of involution' and ' zone of invagination' for the next stage of gas-trulation.