The spectra can be broadly classified into two catagories: (a) Emission spectra (b) Absorption spectra 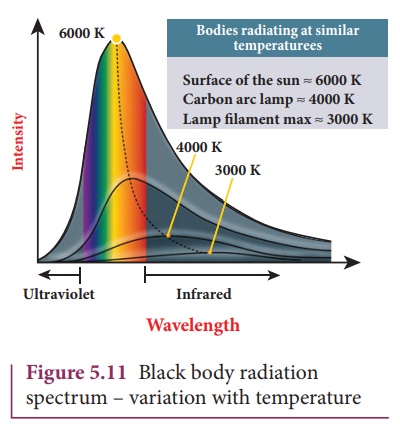 When an object burns, it emits colours. That is, it emits electromagnetic radiation which depends on temperature. If the object becomes hot then it glows in red colour. If the temperature of the object is further increased then it glows in reddish-orange colour and becomes white when it is hottest. The spectrum in Figure 5.11 usually called as black body spectrum (refer plus one volume two Unit 8). It is a continuous frequency (or wavelength) curve and depends on the body’s temperature.

Suppose we allow a beam of white light to pass through the prism as shown in Figure 5.12, it is split into its seven constituent colours which can be viewed on the screen as continuous spectrum. 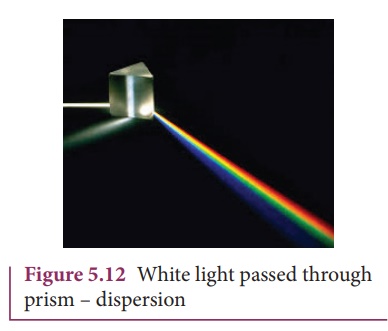 This phenomenon is known as dispersion of light and the definite pattern of colours obtained on the screen after dispersion is called as spectrum. The plural for spectrum is spectra. The spectra can be broadly classified into two catagories:

If the light from incandescent lamp (filament bulb) is allowed to pass through prism (simplest spectroscope), it splits into seven colours. Thus, it consists of wavelengths containing all the visible colours ranging from violet to red (Figure 5.13). Examples: spectrum obtained from carbon arc, incandescent solids, liquids gives continuous spectra.

Suppose light from hot gas is allowed to pass through prism, line spectrum is observed (Figure 5.14). Line spectra are also known as discontinuous spectra. The line spectra are sharp lines of definite wavelengths or frequencies. Such spectra arise due to excited atoms of elements. These lines are the characteristics of the element which means it is different for different elements. Examples: spectra of atomic hydrogen, helium, etc.

Band spectrum consists of several number of very closely spaced spectral lines which overlapped together forming specific bands which are separated by dark spaces, known as band spectra. This spectrum has a sharp edge at one end and fades out at the other end. Such spectra arise when the molecules are excited. Band spectrum is the characteristic of the molecule hence, the structure of the molecules can be studied using their band spectra. Examples, spectra of hydrogen gas, ammonia gas in the discharge tube etc.

When the spectrum obtained from the Sun is examined, it consists of large number of dark lines (line absorption spectrum). These dark lines in the solar spectrum are known as Fraunhofer lines (Figure 5.16). The absorption spectra for various materials are compared with the Fraunhofer lines in the solar spectrum, which helps in identifying elements present in the Sun’s atmosphere.