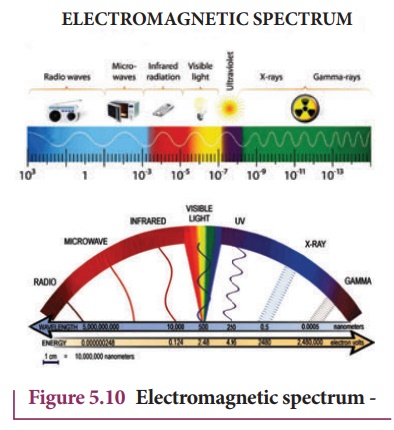 Electromagnetic spectrum is an orderly distribution of electromagnetic waves in terms of wavelength or frequency as shown in Figure 5.10.

It is produced by oscillators in electric circuits. The wavelength range is 1 × 10-1 m to 1 × 104 m and frequency range is 3 × 109 Hz to 3 × 104 Hz. It obeys reflection and diffraction. It is used in radio and television communication systems and also in cellular phones to transmit voice communication in the ultra high frequency band.

It is produced by electromagnetic oscillators in electric circuits. The wavelength range is 1 × 10-3 m to 3 × 10-1 m and frequency range is 3 × 1011 Hz to 1 × 109 Hz. It obeys reflection and polarization. It is used in radar system for aircraft navigation, speed of the vehicle, microwave oven for cooking and very long distance wireless communication through satellites.

It is produced from hot bodies (also known as heat waves) and also when the molecules undergo rotational and vibrational transitions. The wavelength range is 8 × 10-7 m to 5 × 10-3 m and frequency range are 4 × 1014 Hz to 6 × 1010 Hz. It provides electrical energy to satellites by means of solar cells. It is used to produce dehydrated fruits, in green houses to keep the plants warm, heat therapy for muscular pain or sprain, TV remote as a signal carrier, to look through haze fog or mist and used in night vision or infrared photography.

It is produced by incandescent bodies and also it is radiated by excited atoms in gases. The wavelength range is 4 × 10-7 m to 7 × 10-7 m and frequency range are 7 ×1014 Hz to 4 × 1014 Hz. It obeys the laws of reflection, refraction, interference, diffraction, polarization, photo-electric effect and photographic action. It can be used to study the structure of molecules, arrangement of electrons in external shells of atoms and sensation of our eyes.

It is produced by Sun, arc and ionized gases. The wavelength range is 6 × 10-10 m to 4 × 10-7 m and frequency range are 5 × 1017 Hz to 7 × 1014 Hz. It has less penetrating power. It can be absorbed by atmospheric ozone and harmful to human body. It is used to destroy bacteria, sterilizing the surgical instruments, burglar alarm, detect the invisible writing, finger prints and also in the study of molecular structure. 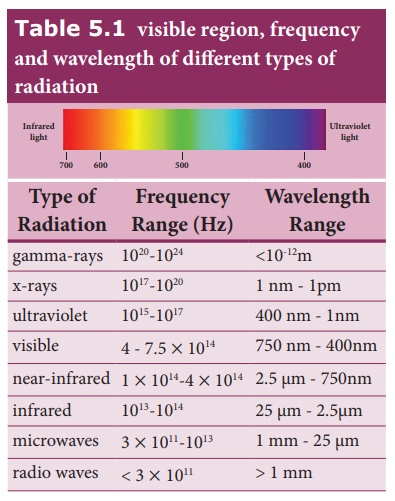 It is produced when there is a sudden deceleration of high speed electrons at high-atomic number target, and also by electronic transitions among the innermost orbits of atoms. The wavelength range 10-13 m to 10-8 m and frequency range are 3 × 1021 Hz to 1 × 1016 Hz. X-rays have more penetrating power than ultraviolet radiation. X-rays are used extensively in studying structures of inner atomic electron shells and crystal structures. It is used in detecting fractures, diseased organs, formation of bones and stones, observing the progress of healing bones. Further, in a finished metal product, it is used to detect faults, cracks, flaws and holes.

It is produced by transitions of atomic nuclei and decay of certain elementary particles. They produce chemical reactions on photographic plates, fluorescence, ionisation, diffraction. The wavelength range is 1 × 10-14 m to 1 × 10-10 m and frequency range are 3 × 1022 Hz to 3 × 1018 Hz. Gamma rays have high penetrating power than X-rays and ultraviolet radiations; it has no charge but harmful to human body. Gamma rays provide information about the structure of atomic nuclei. It is used in radio therapy for the treatment of cancer and tumour, in food industry to kill pathogenic microorganism.

A magnetron in a microwave oven emits electromagnetic waves (em waves) with frequency f = 2450 MHz. What magnetic field strength is required for electrons to move in circular paths with this frequency?.

Frequency of the electromagnetic waves given is f = 2450 MHz

The corresponding angular frequency is

Charge of the electron

This magnetic field can be easily produced with a permanent magnet. So, electromagnetic waves of frequency 2450 MHz can be used for heating and cooking food because they are strongly absorbed by water molecules.