In certain maize varieties, a cob may contain some kernels with different 1pigmentation from the others, indicating that a mutation has changed the pigment synthesis.

In certain maize varieties, a cob may contain some kernels with different 1pigmentation from the others, indicating that a mutation has changed the pigment synthesis. Snapdragons normally have red flowers, but occasion­ ally have mutated progeny in which parts of the flower no longer accumu­ late red pigment, resulting in, e.g., white stripes in the flowers. Sometimes the descendants of these defective cells regain the ability to synthesize the red pigment, developing flowers with not only white stripes but also red dots.

Barbara McClintock (USA) studied these phenomena for many years in maize, using the methods of classic genetics. In the genome of maize she found mobile DNA elements, which jump into a structural gene and thus inactivate it. Generally, this mobile element does not stay there per­ manently, but sooner or later jumps into another gene, whereby in most cases the function of the first structural gene is restored. In 1983 Barbara McClintock was awarded the Nobel Prize in Medicine for these important discoveries. Later it became apparent that these transposable elements, which were named transposons, are not unique to plants, but also occur in bacteria, fungi, and animals. 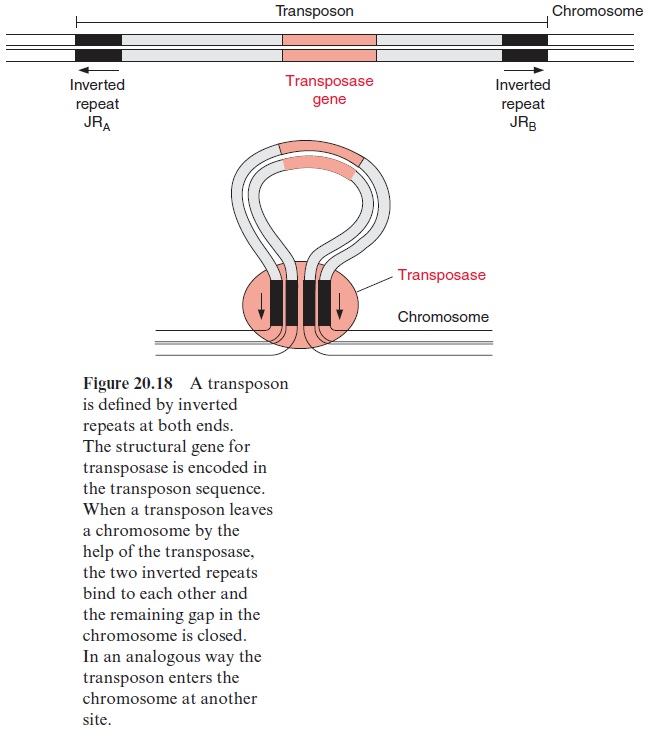 Figure 20.18 shows the structure of the transposon Ac (activator) from maize, consisting of double-stranded DNA with 4,600 bp. Both ends con­ tain a 15 bp long inverted repeat sequence (IRA, IRB). Inside the transpo­ son is a structural gene that encodes transposase, an enzyme catalyzing the transposition of the gene. This enzyme binds to the flanking inverted repeats and catalyzes the transfer of the transposon to another location and its integration into the new location as well as its elimination from there. Sometimes it can happen that the excision of the transposon is imprecise, so that after its translocation the remaining gene may have a slightly modi­ fied sequence, which could result in a lasting mutation.

A transposon can be regarded as an autonomous unit encoding the pro­ teins required for jumping. There are controversial opinions about the ori­ gin and function of the transposons. One explanation is that the transposons are a kind of parasitic DNA, with features comparable to the viruses, which exploit the cell for multiplication. But it is also possible that the transposons offer the cells a selection advantage by increasing the mutation rate in order to enhance adaptation to changed environmental conditions.

As the transposons can be used for tagging genes, they have become an interesting tool in biotechnology. It has already been discussed that the insertion of a transposon in a structural gene results in the loss of the encoding function. For example, when a transposon jumps into a gene for anthocyanin synthesis in snapdragons, the red flower pigment can no longer be synthesized. The transposon inserted in this inactivated gene can be used as a DNA probe (marker) to isolate and characterize a gene of the anthocyanin biosynthesis pathway.