The fibers from individual regions of the retina occupy specific positions in the different parts of the optic system.

Topographic Organization of the Visual Pathway

The fibers from individual regions of the retina occupy specific positions in the different parts of the optic system. To illustrate this in a simple way, the retina is subdivided into four quadrants that all share the center, namely, the macula with the central fovea (area of highest visual acuity). The fibers of the fovea show a regular point-to-point connection between fovea, lateral genicu-late body, and striate area.

The halves of the visual fields of each eye (visual hemifields) (A1) are projected onto the respective contralateral halves of the re-spectiveretina (hemiretinas) (A2). Immedi-ately after the exit of the optic nerve from the eyeball (A3), the macular fibers lie on the lateral side of the nerve, with the fibers from the nasal half of the macula lying in the cen-ter, surrounded by fibers of the temporal half of the macula. Further along the optic nerve, the macular bundle comes to occupy the center (A4). 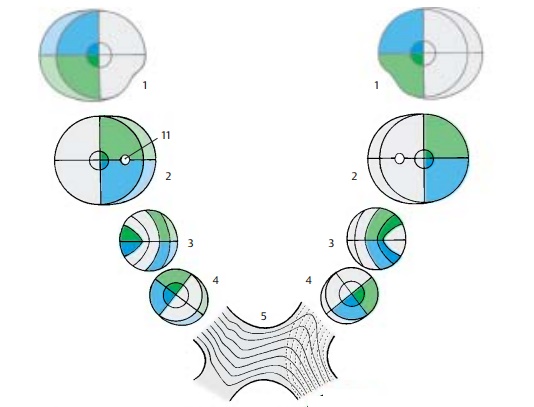 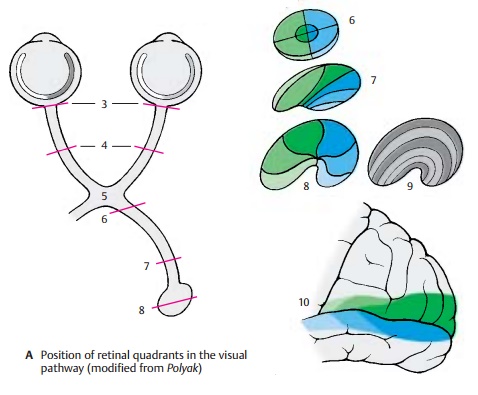 The fibers in the lateral geniculate body (A8) terminate in the same arrangement. The central wedge of the terminal macular fibers makes up almost half of the genicu-late body. The fibers from the periphery of the retina terminate in the most anterior and ventral regions of the lateral geniculate body. The terminals of the ipsilateral and contralateral fibers in the geniculate layers are shown schematically in light gray and dark gray (A9) (see also p. 257, A). The geniculate cells of the central wedge project to the posterior region of the striate area (A10). The area of highest acuity, which in the human retina measures slightly more than 2 mm in diameter, is represented by the largest portion of the visual cortex. Ros-trally to it lie the much smaller areas for the remaining parts of the retina. The upper quadrants of each retina are represented in the upper lip of the calcarine sulcus, and the lower quadrants in the lower lip.

A11 Blind spot (papilla of the optic nerve).